This is the dramatic moment British rapper Sneakbo is forced to flee for safety after an ugly confrontation during a Costa del Sol holiday.

A man identified locally as the south London-based artist was filmed sprinting away as a gang cornered him and one of the aggressors threw a drink over him before hurling a glass at a wall beside him.

The shocking scenes occurred in the upmarket resort of Puerto Banus near Marbella earlier this week. 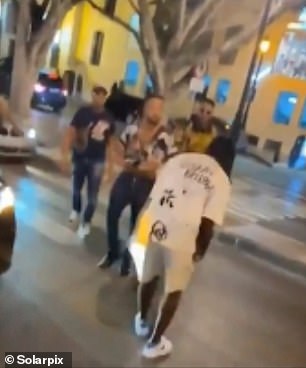 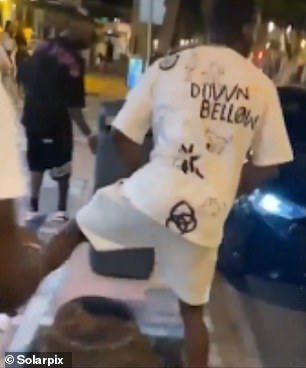 Sneakbo, whose first UK single The Wave in 2011 peaked at 48 in the UK charts, attempted to laugh off the incident in a rambling Instagram message by claiming: ‘I promise I’m laughing, not a scratch on me. Minor issue with some folks I’ve never met in my life.’

Despite the obvious aggressiveness of the men who went for him, he insisted: ‘I still don’t want security cause they won’t be on what I’m on when it gets cracking.’

The 29-year-old posted a selfie of him in a white tracksuit top with a cat’s head photoshopped over his own alongside the message, keeping alive a bizarre urban myth that has been doing the round for years and apparently started after he escaped some boys who had chased him into a McDonald’s in South London.

As the rumour spread, fans claimed the rapper used black magic to carry out the transformation.

Sneakbo, real name Agassi Babatunde Odusina, made no mention of where the fight had occurred but it was clear from footage posted online that it was in Julio Iglesias Avenue which is the main avenue running behind Puerto Banus marina. 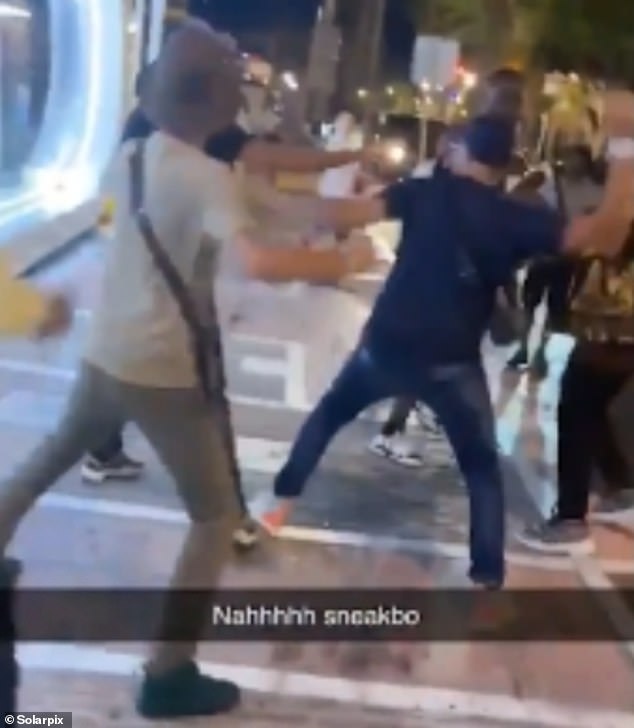 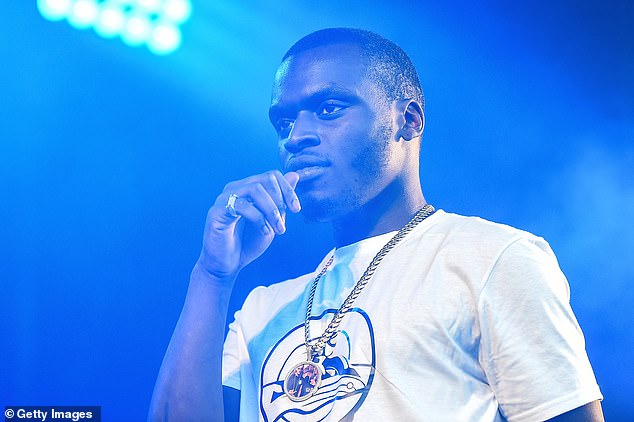 The busy road is popular at this time of year with boy racers and European and Arab tourists who like to flaunt their wealth by cruising in their Lamborghinis and Ferraris.

It was not immediately clear what had sparked the dispute and whether there had been any arrests.

The rapper, who had a number of top 40 hits including ‘Zim Zimma and ‘Ring a Ling’ between 2021 and 2013, appeared to be on the back foot all the time before running away as a man in a baseball cap threw a glass which broke next to where he was standing.

Sneakbo released his debut album Brixton in March 2018. Last year he faced criticism after filming a music video during lockdown in front of a reported 200-plus fans. 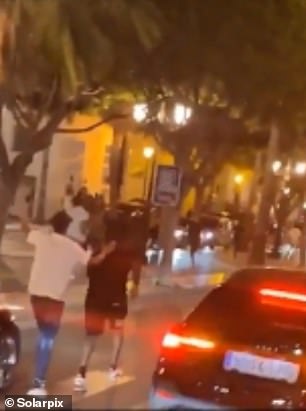 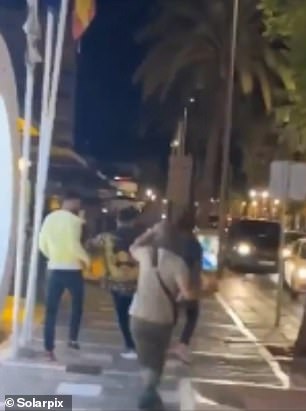 Sneakbo attempted to laugh off the incident in a rambling Instagram message by claiming: ‘I promise I’m laughing, not a scratch on me. Minor issue with some folks I’ve never met in my life.’

A crowd gathered in Buckingham Park, Aylesbury, in May 2020 after the artist said online he wanted ‘to see everyone on the block.’  Sneakbo’s 28th birthday also made the headlines.

At the time DJ Tim Westwood was reported to have flouted lockdown rules to perform to hundreds of guests at an illegal rave in Greenwich, south east London, organised for the rapper’s special day.

In November 2011 the musician threatened to kill a mother and her two children. He was spared jail so he could pursue his music career.

Reports at the time said he admitted being in breach of an ASBO when he ‘aggressively threatened’ the mother earlier the same year after his sister had an affair with her husband.

He was prosecuted as Agassi Odusina, then aged 19, at Inner London Crown Court.