Washington: As the Morrison government scrambles to find extra vaccine supplies following its decision to make Pfizer the preferred vaccine for Australians under 30, it has an obvious place to look: the United States.

But securing access to the vast and tightly-held US vaccine stockpile will take patience and diplomatic skill.

America’s vaccine rollout has been accelerating dramatically over recent weeks. Over one in three US adults have received a vaccine shot and a quarter of the adult population is fully vaccinated. President Joe Biden announced this week that all Americans should be eligible to be vaccinated by April 19, moving forward his previous deadline of the start of May. 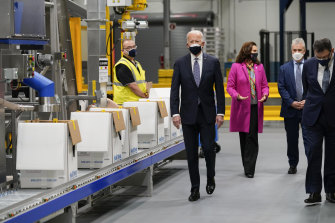 The US rollout is moving so quickly that it is expected to face a glut of vaccines by the middle of next month. This raises the question of what the Biden administration will do with its surplus doses and how it will deploy America’s vaccine manufacturing facilities once local demand runs dry.

The US has purchased 600 million doses alone from Pfizer and Moderna – more than enough to vaccinate the entire adult population. On top of that, the Biden administration has ordered 200 million does of the one-shot Johnson and Johnson vaccine. The US is also sitting on a stockpile of AstraZeneca doses that are unlikely to ever be used in the country because the vaccine has not been approved for use by the Food and Drug Administration.

Yet at least in the short term, there is no sign that vaccines will be headed from Pfizer’s manufacturing plant in Michigan to Australia – or any third country.

While Biden has made a point of rejecting Donald Trump’s “America First” approach to foreign policy, that’s not true when it comes to vaccines. Biden has made clear that, while he wants to help other countries beat the pandemic, his priority is getting as many Americans vaccinated as soon as possible.

Although the policy is rarely explicitly stated, the US has an effective export ban on COVID-19 vaccines. Under agreements reached between the US government and the vaccine manufacturers, locally-manufactured doses are required to remain in America. There is no record of a single dose of the Pfizer, Moderna or Johnson and Johnson vaccine leaving America’s borders for use in another country.

For example, Canada has had to source its Pfizer vaccines from Belgium rather than the US, its close ally and next-door neighbour. Mexico has been shipping in vaccines from India.

The only exception was a one-off “loan” of four million vaccine Astra Zeneca doses to Canada and Mexico last month, reflecting the fact these vials were going to waste in the US.

Australia’s best hope is that the situation changes when all willing American adults have had a chance to be vaccinated. The Biden administration has not yet announced its plans for distributing any extra vaccines internationally but is expected to share them with the world in some form.

The administration could distribute any surplus doses to other countries in bilateral deals or by donating to the global COVAX vaccine-sharing initiative. It could also allow companies like Pfizer to keep manufacturing vaccines in the US and export them for sale around the world.

Either way, Australia will face fierce competition to secure access to American-made vaccines. On the plus side, Australia is a close US ally; on the other hand, the need is more acute in countries whose most pressing goal is saving lives rather than restarting international travel.

Canada and Mexico will understandably want to be at the front of the queue. They border the US and their COVID infection rates are higher than Australia’s. It’s also in America’s interest to ensure that its closest neighbours get the vaccine under control to stop it from across the border.

Other South American countries such as Brazil, where the virus is killing 3000 people a day, would make extremely worthy recipients. Other strong US allies such as Japan, where the frustratingly slow vaccine rollout mirrors Australia’s, would also dearly love access to American vaccines.

The US is also likely to want to keep a buffer of vaccines in case extra booster shots turn out to be required or if the vaccines are approved for use in children.