The US government's own election security unit has declared last week’s presidential race to be “the most secure in America’s history”, refuting Donald Trump’s claims of widespread voter fraud.

As Trump refuses to accept defeat, the Department of Homeland Security’s Cybersecurity and Infrastructure Agency (CISA) has rejected suggestions of a rigged result, insisting "there is no evidence that any voting system deleted or lost votes, changed votes, or was in any way compromised". 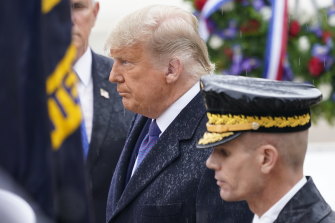 President Donald Trump at a National Veterans’ Day ceremony on Wednesday, one of a few times he’s been seen in public since the election.Credit:CNP/Bloomberg

“While we know there are many unfounded claims and opportunities for misinformation about the process of our elections, we can assure you we have the utmost confidence in the security and integrity of our elections, and you should too."

The Council's statement was released on Friday (AEDT), more than a week after one of the most hard-fought elections in recent US history, and as Trump continues to wage a costly legal war challenging the result in key battleground states such as Pennsylvania.

The President has not yet permitted Democratic President-elect Joe Biden to access government offices or obtain classified briefings, prompting growing fears — including from some Republicans —that keeping him out of loop potentially endangers the country. 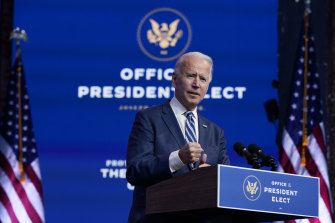 In addition to national security concerns, Biden’s team is also worried its plans for the distribution of a coronavirus vaccine is being hampered, at a time when cases are soaring in the US.

On Friday AEDT public health officials announced more than 152,000 new cases of COVID-19 — another single day record according to Johns Hopkins University data — and 1893 new deaths. On Thursday, Texas became the first state in the country to surpass 1 million infections; On Friday California became the second to hit the grim milestone.

Trump, meanwhile, has kept a low public profile in recent days, but continues to tweet airing his grievances.

Rupert Murdoch’s cable TV network, Fox News is now also in his sights, in another sign of growing hostility between the President and his former favourite media outlet.

The relationship between Trump and Fox News has cooled since election night when the network was the first to call Arizona for Biden — a decision which reportedly infuriated the President. 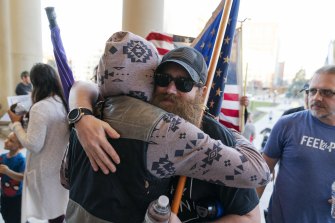 Biden supporter Geoph Espen, left, hugs Trump supporter Kevin Skinner in Lansing, Michigan, after the two moderated an impromptu debate between their sides following a protest by Trump supporters over the election results.Credit:AP

"@FoxNews daytime ratings have completely collapsed. Weekend daytime even WORSE,” Trump tweeted, as speculation mounted that he would seek to create his own TV network in the future.

“Very sad to watch this happen, but they forgot what made them successful, what got them there. They forgot the Golden Goose. The biggest difference between the 2016 Election, and 2020, was @FoxNews!”

Today’s statement by the Elections Infrastructure Government Coordinating Council comes as officials around the country double-check the election process ahead of the Electoral College meeting on December 14 which will officially declare the winner.

However, the council noted in its statement that such reviews are a normal part of the election process.

"When states have close elections, many will recount ballots," it said.

"All of the states with close results in the 2020 presidential race have paper records of each vote, allowing the ability to go back and count each ballot if necessary. This is an added benefit for security and resilience. This process allows for the identification and correction of any mistakes or errors.”

The statement then noted in bold letters: "There is no evidence that any voting system deleted or lost votes, changed votes, or was in any way compromised".