Yangon: Myanmar has granted early release to seven soldiers jailed for the killing of 10 Rohingya Muslim men and boys during a 2017 military crackdown in the western state of Rakhine, sources have told Reuters.

The soldiers were freed in November last year, the sources said, meaning they served less than one year of their 10-year prison terms for the killings at Inn Din village. 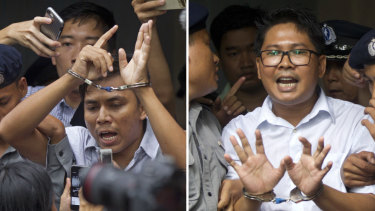 Reuters journalists Kyaw Soe Oo, left, and Wa Lone were arrested for their work that uncovered the 2017 massacre. Credit:AP

They also served less jail time than two Reuters reporters who uncovered the killings. The journalists, Wa Lone and Kyaw Soe Oo, spent more than 16 months behind bars on charges of obtaining state secrets. The two were released in an amnesty on May 6.

Win Naing, the chief warden at Rakhine's Sittwe Prison, and a senior prison official in the capital,

Naypyitaw, confirmed that the convicted soldiers had not been in prison for some months.

"Their punishment was reduced by the military," said the senior Naypyitaw official, who declined to be named.

Both prison officials declined to provide further details and said they did not know the exact date of the release, which was not announced publicly.

The seven soldiers were the only security personnel the military has said it had punished over the 2017 operation in Rakhine, which drove more than 730,000 Rohingya Muslims to flee to Bangladesh. 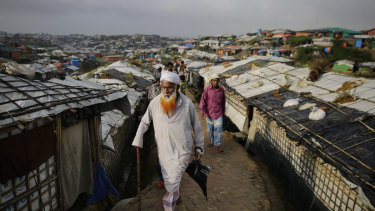 Myanmar denies widespread wrongdoing and officials have pointed to the jailing of the seven soldiers in the Inn Din case as evidence Myanmar security forces do not enjoy impunity.

"I would say that we took action against every case we could investigate," the military's commander-in-chief, Senior General Min Aung Hlaing, told officials from the UN Security Council in April last year, according to an account posted on his personal website.

The army chief cited the Inn Din case specifically. "The latest crime we punished was a killing, and ten years’ imprisonment was given to seven perpetrators," he said. "We will not forgive anyone if they commit [a] crime."

We will not forgive anyone if they commit [a] crime.

Reached by phone on Thursday, a man named Zin Paing Soe confirmed that he was one of the seven soldiers and that he was now free, but declined to comment further. "We were told to shut up," he said.

Ten Rohingya men and boys were captured from Inn Din on September 1, 2017, and massacred by members of the Myanmar army and Buddhist villagers.

The military claimed they were terrorists, but Reuters had uncovered the victims included five fishermen, two shopkeepers, an Islamic teacher and two high school students.