Alexei Navalny’s top aide and spokeswoman have been detained today after Russian police raided the Saint Petersburg offices of the jailed Kremlin critic ahead of nationwide protests.

Just hours before President Vladimir Putin was due to deliver his annual state of the nation address, Russian police swooped in on Navalny’s top aide Lyubov Sobol and spokeswoman Kira Yarmysh in Moscow.

The morning police raids came as the Kremlin sent military trucks and police vehicles to close off city centres today to disrupt planned protests on Wednesday evening in support of Navalny who is on hunger strike in prison.

The two close aides were arrested in the capital while monitors reported police raids on Navalny’s offices in Saint Petersburg and further arrests of his supporters across the country.

Police have already detained eight people taking part in a rally to support Navalny in the Russian city of Magadan. 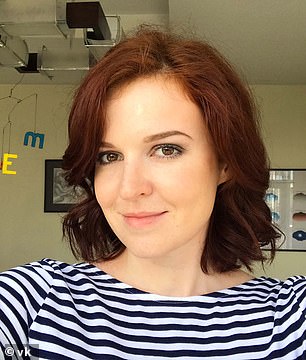 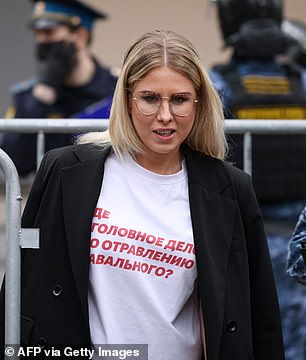 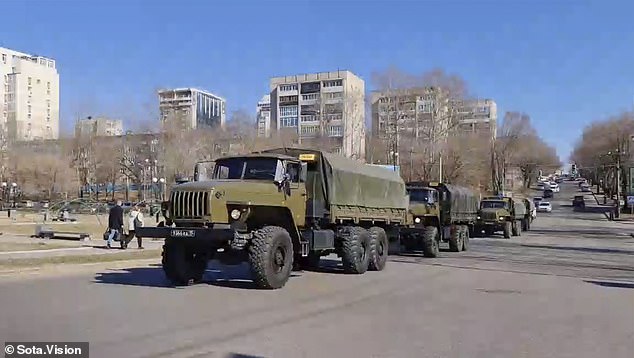 The morning police raids came as the Kremlin sent military trucks and police vehicles to close off city centres today to disrupt planned protests on Wednesday evening in support of Navalny who is on hunger strike in prison. Pictured: A queue of military trucks in the city of Khabarovsk today

Navalny’s team called for the demonstrations in more than 100 cities on Wednesday, after the opposition figure’s doctors said his health was failing following three weeks on hunger strike.

Security forces had issued a warning against taking part in ‘illegal gatherings’ on Wednesday and appeared to be moving quickly to deter protesters.

In the Russian Far East, video and pictures showed police and military vehicles were highly visible on the streets of Vladivostok and Khabarovsk, the two largest cities.

Police yanked Navalny ally Lyubov Sobol, a lawyer with Navalny’s Anti-Corruption Foundation, out of a taxi near Navalny’s main offices in Moscow on Wednesday and detained her, Sobol’s lawyer Vladimir Voronin said.

Spokeswoman Kira Yarmysh said she was also detained at the entrance to the building, while independent monitor OVD-Info said police had conducted searches and detained activists in at least 20 cities across the country. 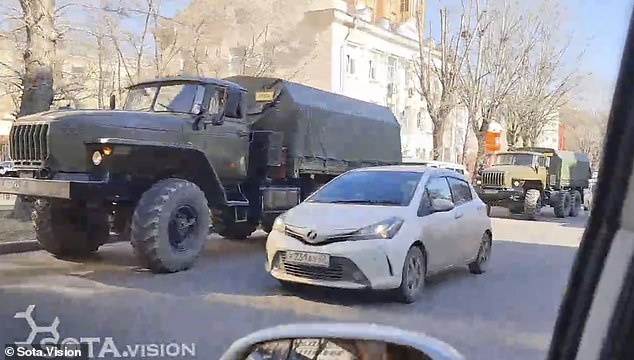 In the Russian Far East, video and pictures showed police and military vehicles were highly visible on the streets of Vladivostok and Khabarovsk (pictured), the two largest cities. 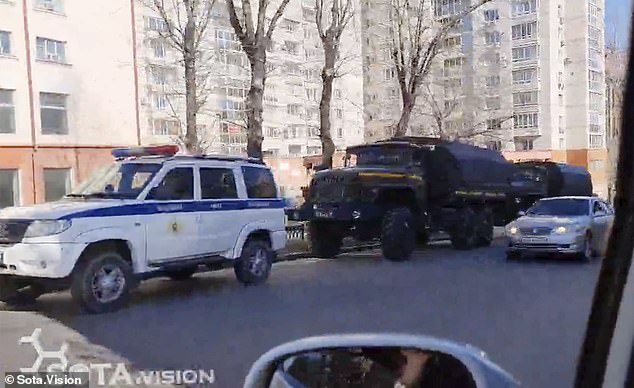 In Khabarovsk, military trucks and police vehicles lined the streets ahead of planned protests this evening 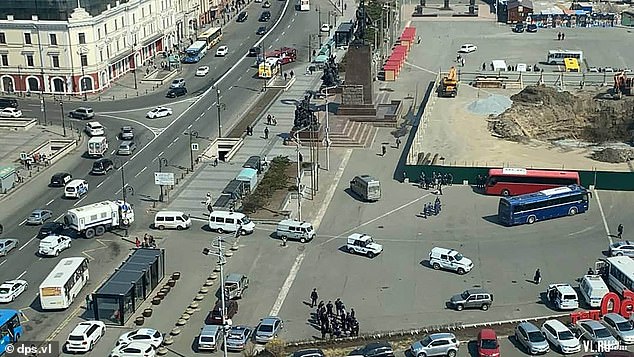 ‘Searches were carried out from the very morning,’ Navalny’s team in Saint Petersburg said on Twitter.

‘They have already come for the office’s cameraman, several volunteers and activists.’

Putin’s annual speech sets the political agenda for the year and in 2020 saw the longtime Russian leader lay out a plan that eventually gave him the power to stay in office until 2036.

This year’s address comes with Moscow locked in diplomatic disputes with the United States and Europe over Navalny, a Russian troop build-up on Ukraine’s borders and a series of espionage scandals.

With parliamentary elections due in September, Putin will be looking to shore up his public support and is likely to remain defiant with the West, as well as announcing a series of measures to boost Russia’s pandemic-hit economy. 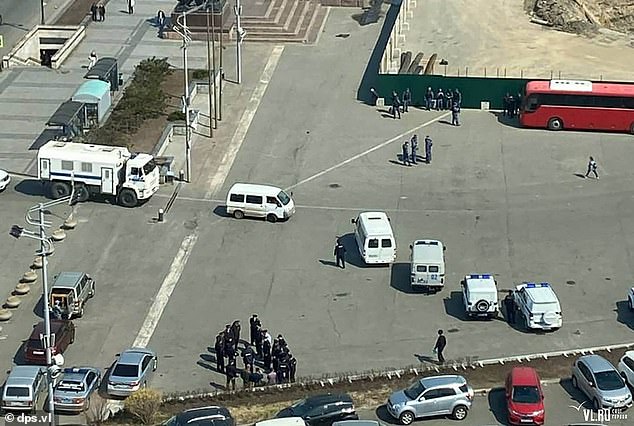 Navalny: From poisoning to hunger strike

August 20, 2020: Navalny is hospitalised in Omsk, Siberia, after losing consciousness during a flight

August 22: Navalny is put into a medically induced coma and transferred to a Berlin hospital

September 2: Berlin says tests carried out by a German army laboratory yielded ‘unequivocal evidence’ that he was poisoned with Novichok

September 4: Russia rejects claims it was behind the poisoning

September 22: Navalny accuses Putin of being behind poisoning as he is discharged from hospital. Putin’s spokesperson Dmitry Peskov calls his claims ‘groundless and unacceptable’

October: Navalny releases a recording of him tricking a Russian Federal Security Service (FSB) agent into confessing that he tried to kill him. The FSB describes the phone call as a ‘provocation’.

January 17 2021: Navalny is arrested at Moscow’s Sheremetyevo airport after Russia’s prisons service alleged he had violated parole terms from a suspended sentence on a 2014 embezzlement conviction

February 2: Navalny is handed a near three-year prison term.

February 17: The European Court of Human Rights orders Russia to release Navalny ‘with immediate effect’. Russia accuses it of ‘interference’.

February 26: Navalny sent to penal colony in the Vladimir region

March 2: The U.S. sanctions seven senior Russians and says its intelligence concluded that Moscow was behind Navalny’s poisoning.

March 15: Navalny says he is locked up in a ‘real concentration camp’ and accuses Russian authorities of torture by depriving him of sleep in prison

April 17: After more than two weeks his doctors say his condition has rapidly deteriorated and he could go into cardiac arrest and ‘die any minute’

April 18: The U.S. warns Moscow of ‘consequences’ if Navalny dies in prison

France, Germany and the European Union join the growing international chorus of protest at Navalny’s plight

Today – April 19: Russia’s prison service says Navalny will be transferred to a hospital for inmates but deems his condition to be ‘satisfactory’

A massive demonstrations in support of Navalny is planned Wednesday evening, just hours after Putin gives his state of the nation address

But the speech threatens to be overshadowed by country-wide demonstrations called by Navalny’s supporters, who fear Navalny’s life is in grave danger.

Navalny’s team has called for protests from 7:00 pm in cities across Russia to support the anti-corruption campaigner, who launched his hunger strike three weeks ago to protest his lack of medical treatment in prison.

More than 10,000 people were detained during demonstrations in support of the Kremlin critic in late January and early February.

Navalny was detained when he returned to Russia in January after months recovering in Germany from a near-fatal poisoning he blames on the Kremlin – an accusation it rejects.

Vladimir Putin’s most prominent rival, 44, was imprisoned in February and is serving two-and-a-half years on old embezzlement charges in a penal colony in the town of Pokrov, around 60 miles east of Moscow.

His team this weekend announced the protests to coincide with Putin’s speech, after his doctors said Navalny was suffering from a range of ailments in prison and could die at ‘any minute’.

Navalny’s doctors were again been denied access to him yesterday despite growing concerns over his health as Russian state TV imposed a news blackout on his hunger strike.

Navalny has been on hunger strike since March 31 because he says Russian prison guards are refusing him ‘proper medical care’ for acute pain in his back and numbness in his legs. Moscow insists he is being given adequate care but no independent doctors have been able to examine him.

Last week, his team said in an Instagram post quoting him that prison doctors had held back from examining him out of fear of ‘it will turn out that the loss of sensation in my limbs may be associated with this [Novichok] poisoning.’

The opposition politician’s lawyers said on Tuesday he is ‘very weak’ after being transported to prison hospital on Sunday, saying he has not been receiving any medical care and demanding he be treated in a civilian hospital.

‘He is very weak. It’s difficult for him to speak and to sit up,’ lawyer Olga Mikhailova told reporters outside the prison colony, adding that ‘medical care in this case is not being given’.

In Russia, major news channels have refused to report on his condition, with no TV bulletins mentioning his transfer to hospital or the EU meeting which ruled Russian authorities were responsible for Navalny’s health.

Russia’s prison service, which has repeatedly prevented Navalny’s doctors from visiting him, said on Monday that he had been moved from his penal colony in the Vladimir region some 60 miles east of Moscow to a medical facility at another colony in the same region.

His personal physician, Dr. Anastasia Vasilyeva, led three other medical experts to try to visit Navalny at the prison clinic and the IK-3 prison in the city of Vladimir. They were denied entry after waiting for hours outside the gates.

‘This is super disrespectful to people who came to fulfil their human duty, a medical duty to help a patient,’ Vasilyeva said.

‘We are talking now only about health and life.’

Navalny’s lawyers also arrived at the penal colony on Tuesday and were allowed in, an AFP journalist at the scene reported.

But Navalny’s chief of staff Leonid Volkov tweeted that the lawyers were being told to wait and predicted they would not be allowed to see their client.

The EU and the United States have imposed sanctions on Russia over Navalny’s poisoning, and on Monday threatened Moscow with further penalties in the event of his death.

Putin is unlikely to mention the Navalny case – he refuses to say his chief critic’s name and the Kremlin continues to dismiss him as an ordinary prisoner.

But he is almost certain to touch on other sources of contention with the West, especially over Ukraine.

A Russian troop build-up on the border with Ukraine – where Kiev’s forces have been battling pro-Russia separatists since 2014 – has sparked widespread alarm and warnings from NATO.

Ties with the West have also been hit by a series of spy scandals. 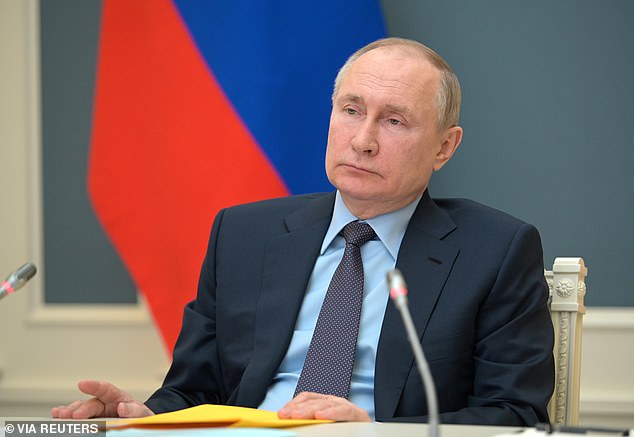 Navalny’s team this weekend announced the protests to coincide with Putin’s speech, after his doctors said Navalny was suffering from a range of ailments in prison and could die at ‘any minute’ 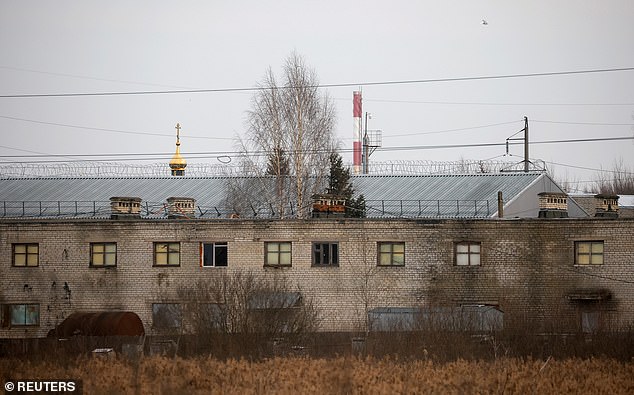 The EU and the United States have imposed sanctions on Russia over Navalny’s poisoning, and on Monday threatened Moscow with further penalties in the event of his death.

Putin is unlikely to mention the Navalny case – he refuses to say his chief critic’s name and the Kremlin continues to dismiss him as an ordinary prisoner.

But he is almost certain to touch on other sources of contention with the West, especially over Ukraine.

A Russian troop build-up on the border with Ukraine – where Kiev’s forces have been battling pro-Russia separatists since 2014 – has sparked widespread alarm and warnings from NATO.

Ties with the West have also been hit by a series of spy scandals.

Washington last week announced sanctions and the expulsion of 10 Russian diplomats in retaliation for what the White House says is the Kremlin’s US election interference, a massive cyber attack and other hostile activity. Russia has vowed to respond in kind.

As tensions peaked last week, US President Joe Biden spoke to Putin by phone, inviting him to hold a summit in a third country. The Kremlin has said it is considering the offer.

During his speech last year, Putin set out a series of constitutional reforms that were eventually approved in a referendum and reset presidential terms so he could run twice more after the end of his current six-year term.

He has said this year’s address will focus on efforts to relaunch the Russian economy after the coronavirus pandemic and to turn around a decline in Russians’ spending power.

Concrete economic improvements will be crucial for Putin going into September’s elections.

While the president himself remains widely popular, his United Russia party is seen as stagnant and corrupt. One poll last month by the Levada Centre predicting it would win only 21 per cent of the vote.