New curbs may be DAYS away: Estate agents could be closed, markets shut and meeting for exercise banned to stop surge in Covid-19 cases unless people start obeying the guidelines, Britons are warned

Lockdown measures could be tightened within days if people keep flouting the rules, the Mail can reveal today.

But sources warned ministers were ready to tighten the lockdown further unless the situation improved by the weekend. 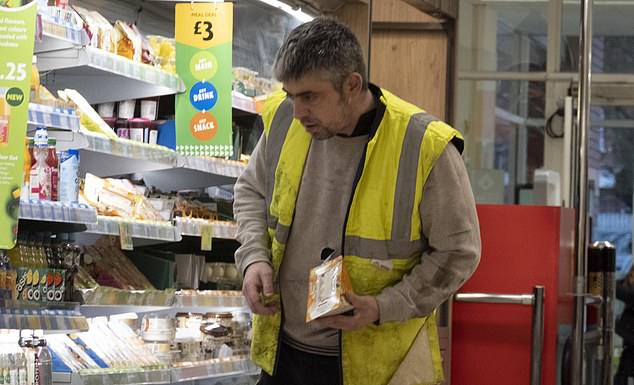 High-visibility: Sandwich but no mask at Morrison’s in London 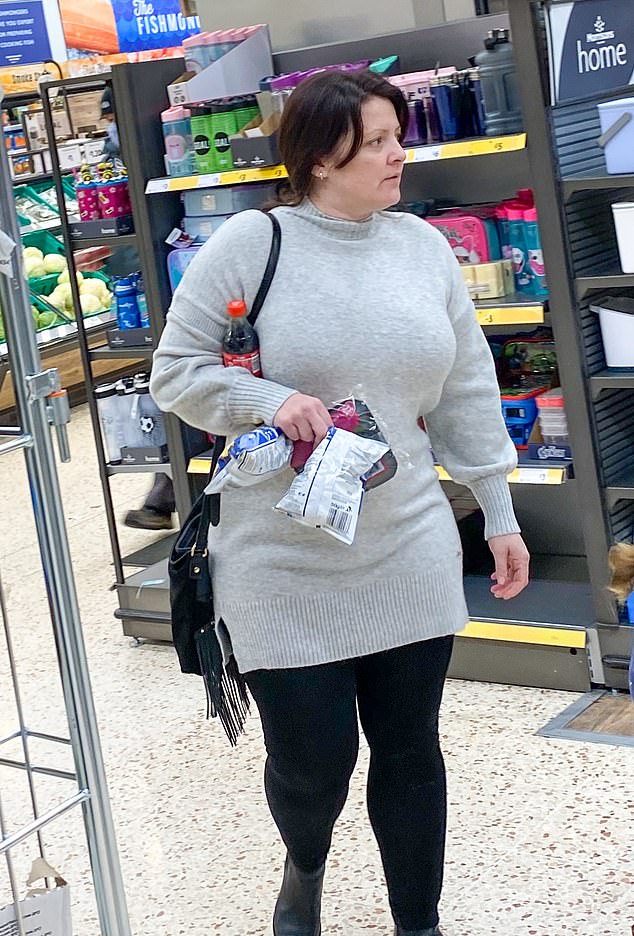 Pop it on: Cola drinker at Morrison’s in Leeds

HOW RULES MAY CHANGE

Ministers are considering removing the exemption that allows two people to meet outdoors to exercise.

The exemption, which did not exist in the original lockdown, was included as a lifeline for the lonely. But scenes of crowded parks have led to concerns it is being abused.

Health officials are examining plans to make masks mandatory in crowded outdoor areas such as supermarket queues and markets. Chief medical officer Chris Whitty said this week that masks were not necessary in most outdoor settings but there ‘might be some logic’ to wearing them in crowded spaces.

Some ministers are pushing for the closure of more businesses, such as estate agents and click and collect retail operations – many of which were shut in the first lockdown. Supporters of the move say it would help limit the spread of the virus and reduce the reasons for people to go out. No10 has not ruled it out.

Some Government scientists are pushing for the two-metre social distancing rule to be extended to three, but officials say the idea is on the back-burner for now.

London Mayor Sadiq Khan has called for places of worship to close while Labour wants nurseries shut. But ministers insist neither move is being considered for now.

‘The compliance data is mixed,’ an insider said. ‘We should have better data by the weekend and at that point we will have to decide whether we need to go further.’

Extra measures being considered include removing the exemption that allows two people to meet outdoors to exercise.

Another source said some ministers were pushing for more businesses to be closed, including estate agents, outdoor markets and click-and-collect retail. Scientists are also arguing for the two-metre social distancing rule to be increased to three metres

A Downing Street source said Boris Johnson would need clear data showing problems before he ordered further damaging closures. The Prime Minister told the Cabinet yesterday it was ‘more important than ever that the public stay at home’.

As officials reported another 1,243 deaths from Covid:

Ministers hope infections are ‘levelling off’ in some areas. Latest data revealed that 45,533 people tested positive for the virus on Monday, taking the seven-day average down by 0.5 per cent – the first fall in weeks. However, some government scientists fear the true case rate is more than 250,000 a day. They have warned the Prime Minister that, even with the rollout of the vaccine, the death rate may not start to fall until the middle of next month.

At a press conference yesterday, Priti Patel was asked why the lockdown rules were laxer than those introduced last March. 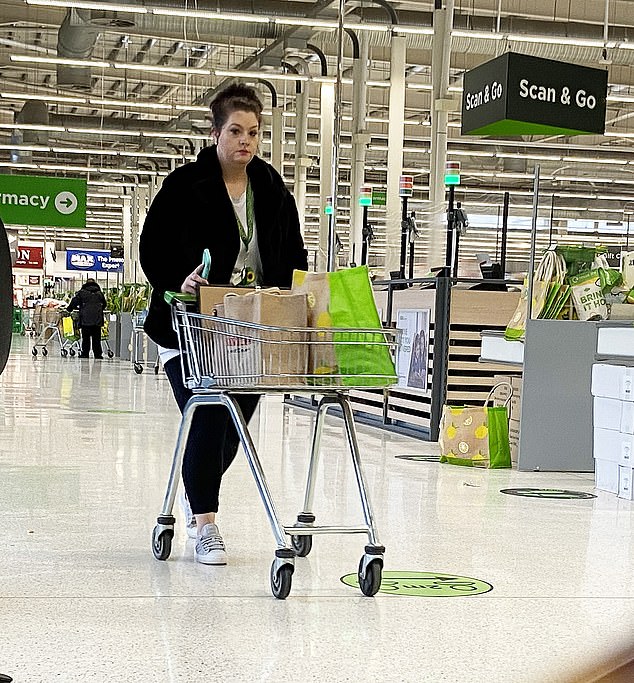 Asda shopper in Swindon  has full trolley but no coverage 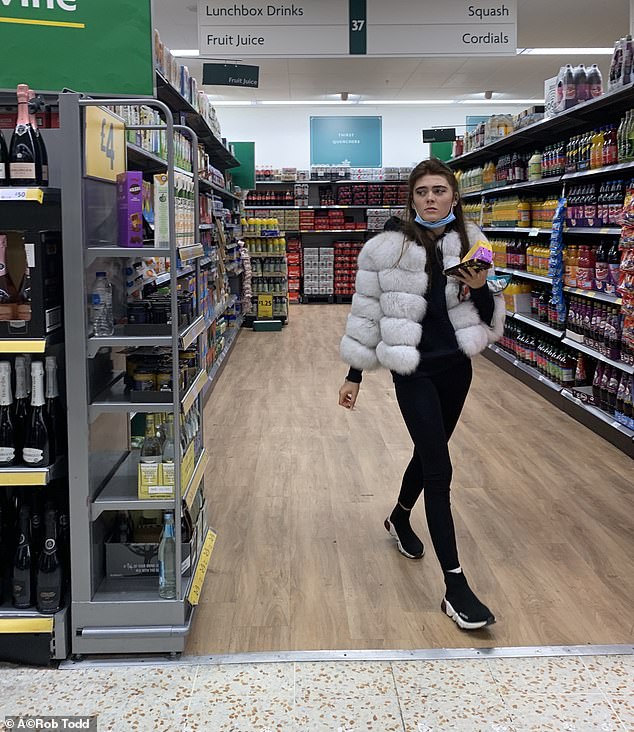 Cover-up in Aisle Three: Shopper at Morrisons in Thamesmead has brought along her face mask – but failed to utilise it correctly 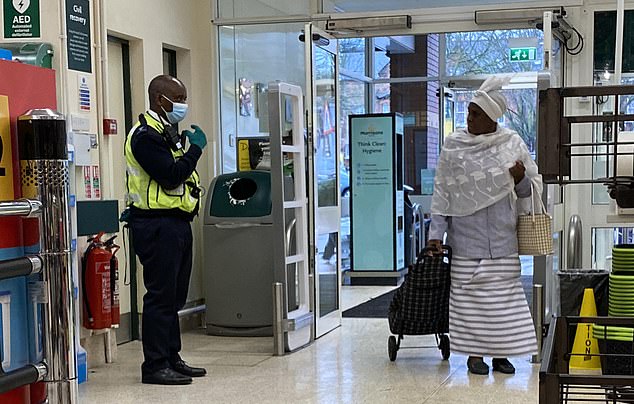 Read my lips? Security guard remonstrates with woman entering a Morrisons without a mask in London

The Home Secretary initially said the regulations were ‘tough enough’ and simply needed to be followed more closely. But she then confirmed ministers were looking again at whether the restrictions need to be tightened.

‘These issues are live within government,’ she said. ‘Rules are always under review. We are constantly, right now, looking at where we are at.’ Miss Patel also revealed that police had handed out 45,000 Covid fines – and warned that a minority were ‘putting the health of the nation at risk’.

The PM’s spokesman said: ‘If we need to take further action we will. But the important thing now is we are asking people to stay at home.’

Ministers are growing alarmed by the emergence of a Covid hotspot on Merseyside, which has overtaken London as the area where the virus is increasing fastest.

A surge in cases there could be embarrassing for the Government, which made great play of the decision to move the region into Tier Two at the end of the second lockdown while most of the rest of the North West stayed in Tier Three.

The highest overall case rate in England remains Barking and Dagenham in London.

Infections are falling for the first time in weeks in a glimmer of hope on the second deadliest day of the pandemic.

Today 1,243 deaths were recorded in the UK. The horrifying death toll is higher than the 1,224 at the peak of the first wave on April 21, but below the record 1,325 last Friday. Weekly cases have fallen for the first time since the second national lockdown ended six weeks ago. Yesterday some 45,553 new cases were reported in the UK, compared to 60,916 last Tuesday and a high of 62,916 last Wednesday.

The infection rate per 100,000 has decreased for three consecutive days and is currently 592, compared to 641 on January 4. It is the first time it has fallen since the start of December, when it was 152.

While pressure on the NHS is increasing, admissions are stabilising in London and the South East. Data shows there are a record 35,075 Covid-19 patients in UK hospitals, up 70 per cent from Christmas Day.

No mask, no shopping! Supermarkets’ crack down – amid fears of attacks on staff

By Sean Poulter Consumer Affairs Editor for the Daily Mail

The stores have also urged customers to shop alone in an effort to help combat increasing infections.

The move follows pressure from the Government, with some ministers suggesting that retailers have not been doing enough to protect the public.

Many industry leaders are privately furious, however, that shops are being treated as scapegoats for soaring infections.

There are concerns the clampdown will trigger flashpoints at supermarket doors, with staff facing abuse and even violence.

Tesco explained its tough line, saying: ‘To protect our customers and colleagues, we won’t let anyone into our stores who is not wearing a face covering, unless they are exempt in line with Government guidance.

‘We will have additional security in stores to help manage this.’

Waitrose said: ‘Marshals will be positioned at the entrances of all supermarkets. They will have disposable masks for customers who do not have their own and will deny admission to anyone refusing to comply.’

In contrast, both the Co-op and Iceland have refused to enforce wearing masks for fear it will lead to attacks on employees.

The two stores and the British Retail Consortium (BRC) insist the police are responsible for enforcing the rules – not shop workers. The penalty is £200 for a first offence.

The Co-op has seen an 80 per cent rise in attacks, including swearing, spitting and physical assaults, during the pandemic.

It said: ‘We have strict policies about ensuring our colleagues are not placed in harm’s way.’ Iceland said: ‘In view of the rising tide of abuse and violence directed at our store colleagues, we do not expect them to confront the small minority of customers who aggressively refuse to comply.’

It has been suggested the Government could increase the social distancing rule for shops from 1m to 2m, and also ban non-essential stores offering ‘click and collect’.

The majority of retail industry bosses argue both plans would be a disaster – particularly for small shops. BRC director of business and regulation, Tom Ironside, said: ‘The ability for non-essential stores, from florists to toy and book shops, to offer click and collect services has been a lifeline.’

John Lewis has already decided to partially suspend its click and collect service from department stores, although it will still be available through Waitrose.