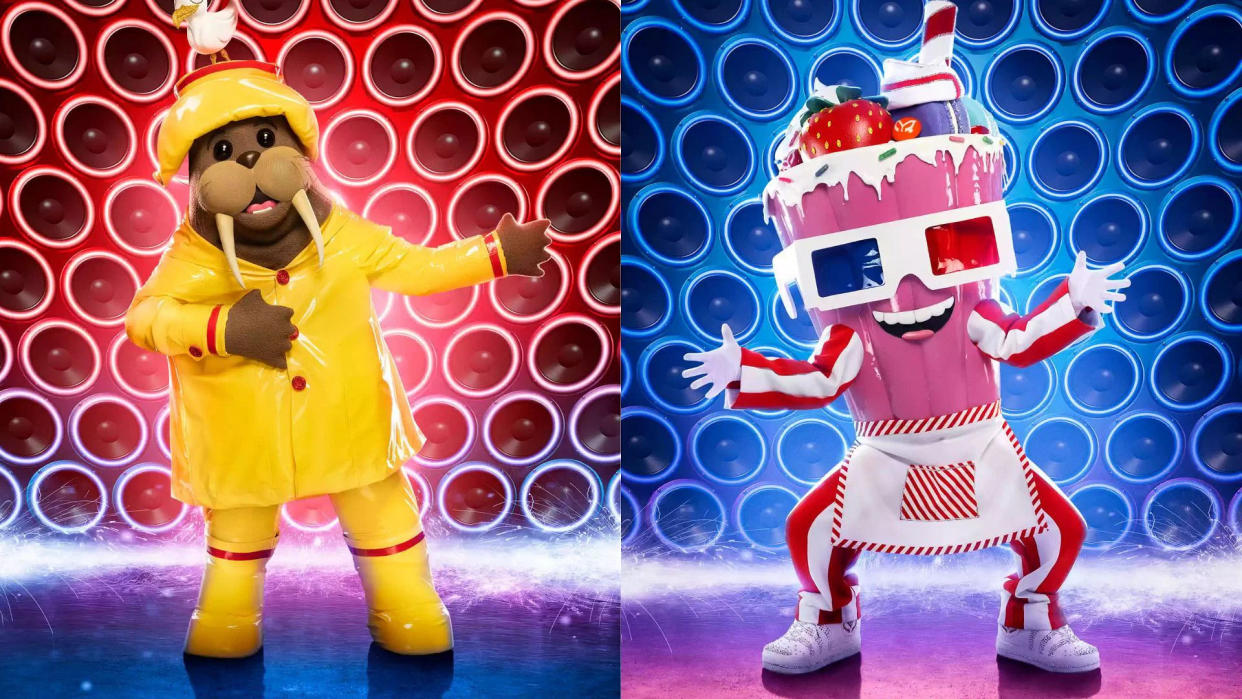 Sunday was ‘90s Night on The Masked Singer, with judge Jenny McCarthy-Wahlberg all dressed up for the occasion as Tragic Kingdom-era Gwen Stefani; host Nick Cannon cosplaying as Bobby “The Crab” Brown, as is his prerogative; and Tag Team introducing every clues package with a “Whoomp! There It Is!” refrain. We even had Girl Meets World star Danielle Fishel and *NSYNC’s Lance Bass dropping by. This made Lance the third *NSYNC member to appear on The Masked Singer, following Season 1’s Joey “The Rabbit” Fatone and this season’s Chris “The Hummingbird” Kirkpatrick, so all we need now is Justin Timberlake and JC Chasez to complete the set and put everything in, um, sync.

Yes, the dream of the ‘90s was alive on The Masked Singer, and in general I’ve been loving the dream themes this season — previous episodes have included Andrew Lloyd Webber Night, TV Theme Song Night, even Muppets Night. But I have found Season 8’s new format, which has featured an almost immediate double-elimination every episode, to be more of a nightmare. (See my lengthy rant about how this format change has sucked much of the fun and suspense out of the series.) This week was no exception, with two mystery singers already being unmasked by the mere hour-long episode’s end. All of the judges complained that this was one episode when all three contestants truly deserved to stay, and vexed fans on Twitter seemed to agree. But the dream of the ‘90s was sadly crushed for both the Walrus and the Milkshake.

Jenny actually thought the Walrus, who put his own spin on the Spin Doctors’ 1992 hit “Two Princes,” was the above-mentioned JC Chasez, while her fellow judges guessed that the tusk-y, slightly husky warbler might be another heartthrob like Joseph Gordon-Levitt, John Stamos, Mark-Paul Gosselaar, Mario Lopez, or Scott Wolff. But only Robin Thicke figured out that Blossom sitcom star Joey Lawrence was the Walrus. (Goo goo g'joob. Sorry, couldn’t resist.)

"I saw all the different shows that you went through in your career, and I remember when you released a song, I was like, 'Wow, I wanna have a video and have my song [be like that],' because we looked a little similar," Robin confessed to a very flattered Joey. Jenny was a newly converted Joey fan, exclaiming, "Where's your albums? You need albums! You need tons of albums!" — to which Joey replied that he was indeed planning to make music again. "You should, man; you sounded great," said Robin. So, Joey may blossom again… but it was all over for the Walrus.

The Milkshake also didn’t bring all the judges or studio audience voters to the yard (sorry, again — this time for the off-theme mid-2000s reference), even though his swaggy performance of Sir Mix-a-Lot’s “Jump on It” had judges Nicole Scherzinger and Ken Jeong thinking he was a legit hip-hop “superstar” like LL Cool J, DJ Jazzy Jeff, Nas, Ice Cube, or even T.I. (If this had been T.I., I’m pretty sure T.I.’s former “Blurred Lines” collaborator Robin would’ve sussed that out quickly.)

Instead, this dairy king turned out to be NFL running back Le'Veon Bell, who attempted to tackle the Lambs on a Roxbury-worthy duel of Haddaway’s “What Is Love,” but just couldn’t compete against their blissful, blended, bleating harmonies. But this may not be the last we've heard from Le'Veon, either. "I'm really trying to showcase my talents, you know? A lot of people know me for the football field. I just wanted to get in another lane and kind of show people that I'm more talented in other things than just football," he explained.

So, this meant that the reigning queen, or queens, held onto their title for a second week: the fluffy flock known as the Lambs. These pop-starlets-in-sheep’s-clothing harmonized gloriously on Alanis Morissette’s “Ironic” and had Nicole exclaiming, “Oh my God, your voices are incredible! You sound like a record up there!” It was obvious from their girl-group vocals alone that these musical muttons-with-chops were Wilson Phillips, as I guessed last week. But in case anyone reading this needs more convincing, these were the clues:

We know that the Lambs are childhood “besties,” plus we saw references to SoCal cities Beverly Hills and Venice — and Chynna Phillips, Carnie Wilson, and Wendy Wilson grew up together in California. We saw the word “FAMOUS” emblazoned across a pair of designer jeans — and these women have fame in their genes as the offspring of the Mamas and the Papas’ John and Michelle Phillips and the Beach Boys’ Brian Wilson. We saw a diamond ring — mostly like a reference to Bridesmaids, which featured an iconic Wilson Phillips cameo. And the Lambs bragged that they’ve worked with Paul McCartney — and Wilson Phillips contributed backup vocals to McCartney’s “FourFiveSeconds” in 2015. Other tipoffs included a mention of Fleetwood Mac’s “Go Your Own Way,” which Wilson Phillips covered in 2004; “dreaming” (either a reference to the Mamas and the Papas’ biggest hit or to Wilson Phillips’s own single “The Dream Is Still Alive”); and “reality” (Wilson Phillips starred in their own reality TV series, Still Holding On, in 2012, and Carnie has appeared on multiple reality shows). It is absolutely not an impulsive guess when I say that the Lambs are Wilson Phillips.

So, can the Lambs hold on for just one more day, and make it to this season’s semifinals alongside Season 8’s Bracket A reigning queen, Amber “The Harp” Riley? Find out next week, when they compete against two more new contestants.