The NHS has sparked a row by calling expectant mothers ‘pregnant people’ with some females responding that ‘only women give birth’.

NHS East of England tweeted a quote from one of their antenatal and newborn screening coordinators, called Suzanne, which said: ‘Our job is to implement all the screening programs for pregnant people and their newborn babies.’

The post from yesterday triggered a debate on the social media platform, with one person writing: ‘Pregnant women. Fixed it for you.’

It follows an NHS hospital telling staff to use ‘gender inclusive’ phrases such as ‘birthing parents’ and ‘human milk’ rather than referring to ‘mothers’ and ‘breast milk’ in a drive to stamp out ‘mainstream transphobia’. 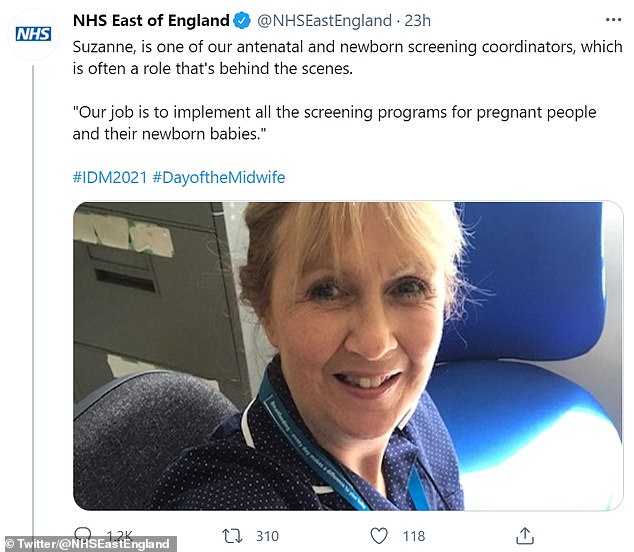 NHS East of England tweeted a quote from one of their antenatal and newborn screening coordinators, called Suzanne, which referred to expectant mothers as ‘pregnant people’

In response to the health worker’s reference to ‘pregnant people’, a social media user commented: ‘We are not people… we are WOMEN… when I gave birth to my son four years ago I was a pregnant women not a pregnant person!!!!!’

A third added: ‘Pregnant WOMEN. I think that is what you mean.’

But others praised the NHS for using ‘gender inclusive’ language, with one person tweeting: ‘What is the harm in using inclusive language?’

A second social media user said: ‘Thrilled at the inclusive use of ‘pregnant people’ – not only does it included all those whose gender is other, but also includes partners as an integral part of the pregnancy… big thumbs up to the NHS.’

Another posted: ‘Last time I checked women were people.’

And a fourth wrote: ‘So happy to see inclusive wording, sad to see how a lot of people are talking about it.

‘As a guy who has been pregnant, it’s weird to see how people are trying to make it a women-only thing. Not to mention that most pregnant people are a team, a couple.’

The post from yesterday triggered a debate on the social media platform, with one person writing: ‘Pregnant women. Fixed it for you’

The comments come after Brighton and Sussex University Hospitals Trust became the first in the country to formally implement a ‘gender inclusive’ overhaul for its maternity services department, which will now be known as ‘perinatal services’.

Changes include replacing the use of the word ‘woman’ with the phrase ‘woman or person’, and the term ‘father’ with ‘parent’, ‘co-parent’ or ‘second biological parent’, depending on the circumstances.

The new terms will be used for documents, protocols and Trust-wide communication.

They will also be used when discussing pregnancy, birth and parenting at a population level – such as at a meeting.

The Trust stressed that when interacting with a patient in a one-on-one scenario, midwives should continue referring to their gender.

A policy document released in February said staff should not stop using the word ‘woman’ or other terms describing motherhood but they should consciously start adding in the word ‘people’ and other more inclusive language.

But others praised the NHS for using ‘gender inclusive’ language, with one person tweeting: ‘What is the harm in using inclusive language?’

Although no official figures exist on the trans community, research has shown nearly 10 per cent of the population of Brighton and Hove identify as LGBTQ+, compared to around 2.2 per cent of the general population.

The Office for National Statistics estimates that there are approximately 200,000-500,000 trans people in the UK.

However it says there is no robust or clear indication of the true number.

Freddy McConnell, 34, was the first British transgender man to ever carry and give birth to a child.

He previously lost a battle to be registered as the ‘father’ on his son’s birth certificate.

Freddy, who was able to become pregnant in 2017, was legally male when he gave birth to his first child Jack in 2018.

Having accessed a sperm donor, Freddy stopped taking testosterone to become pregnant and became the UK’s first transgender man to carry and give birth to his own baby.

MailOnline has contacted NHS East of England and NHS England for comment.