Beirut: New satellite images show fields, orchards and olive groves burning in north-west Syria, where the army has waged an assault against rebels in their last major stronghold.

Government air strikes, backed by Russia, have focused on the south of Idlib province and nearby parts of Hama, uprooting nearly 250,000 people. The bombing has killed 229 civilians and injured 727 others, according to the Union of Medical Care and Relief Organisations (UOSSM) charity. 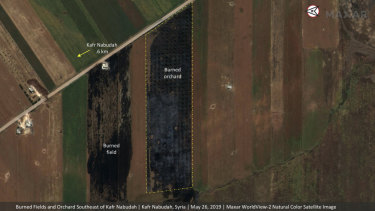 Significant damage to fields and orchards south of Kfar Nabudah, Syria, on May 26 as a result of a government offensive.Credit:Maxar/AP

The rescue service, which works in opposition territory, said shelling and air raids killed 24 people in villages in the north-west on Tuesday, Syria time, including children.

In satellite photos, plumes of dark smoke rise from the countryside around al-Habeet village in Idlib and the small town of Kafr Nabouda in Hama.

The before and after images, collected at the start and end of last week, show patches of scorched earth, fields blackened by fire, and clusters of destroyed buildings. Some of the fires appear to be still burning. 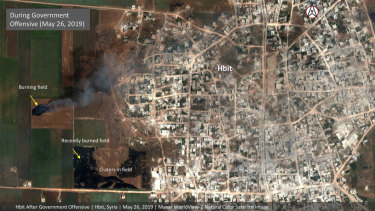 Fires still burn in olive groves and orchards during harvest season around Kfar Nabudah and Habeet, two villages on the edge of Idlib province where fighting has focused. Credit:Maxar/AP

But Syrian state news agency SANA said on Tuesday that it was the militants who had shelled villages in the northern Hama countryside, damaging houses and burning wheat fields. 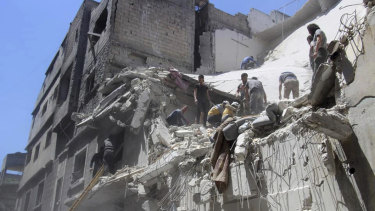 White Helmets inspect a damaged building after an air strike by Syrian government forces, in the town of Ariha, in the north-western province of Idlib.Credit:White Helmets/AP

While al-Habeet is in the hands of insurgents, government forces recaptured Kafr Nabouda on Sunday, the third time it changed hands in the latest fighting. State media said the army seized it from Tahrir al-Sham, formerly the Nusra Front until it broke away from al-Qaeda.

France's Foreign Minister said on Tuesday there were signs that chemicals have been used in attacks in the region, but they still needed to be verified.

The United States said on May 23 it had received numerous reports that appeared consistent with chemical exposure after forces loyal to Syrian President Bashar al-Assad launched an offensive on the rebel stronghold.

"We have [indication] of the use of chemical weapons in the Idlib area but for now there isn't verification," Jean-Yves Le Drian told the French Parliament's foreign affairs committee.

"We are cautious because we think that the use of chemical weapons must be confirmed and lethal before we react," he said.

The army onslaught in the north-west over the past month marks the most intense escalation between President Bashar al-Assad and his insurgent enemies since last northern summer. His government denies using chemical weapons.

The United States, Britain and France launched air strikes in April 2018 against what they described as three Syrian chemical weapons targets in retaliation for a suspected gas attack that killed scores of people in the Damascus suburb earlier that month.

Rebels fighting on the mountainous western edge of Syria's last big rebel enclave of Idlib said on May 19 that the army had shelled them with poison gas, leading some to suffer choking symptoms. They said they had not documented the attack because they were under bombardment when it occurred.