Premier Annastacia Palaszczuk has touched down in Tokyo to make the final pitch for Brisbane and Queensland to host the 2032 Olympic Games.

The Queensland bid has already been given “preferred bidder” status and is considered a near certainty of winning the Games. 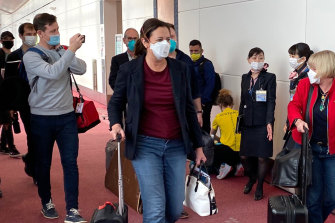 Queensland Premier Annastacia arrives at Haneda Airport ahead of a final pitch for the 2032 Olympics.Credit:Getty Images

However, Ms Palaszczuk had previously stressed it was still vital she attended in person to make the final pitch to the full panel of the Intentional Olympic Committee.

Ms Palaszczuk told reporters at Haneda Airport that she was very excited to finally be in Tokyo and was ready to make the final pitch.

“This is a once-in-a-lifetime opportunity for Brisbane, Queensland, Australia to have the 2032 Olympics and I know that we are going to throw everything we possibly have at it,” she said.

“With a couple of days to go, it is the countdown now and fingers crossed we will be successful.”

There has been criticism of the Premier’s trip, with the LNP state opposition claiming she did not need to go in person.

An online petition with more than 130,000 signatures had also been circulating calling for Ms Palaszczuk not to travel overseas while international borders were closed.

During estimates hearings on Friday, brought forward to facilitate her Japan trip, Ms Palaszczuk fired back at criticism from the opposition that she should not be travelling at the moment.

“The people of Queensland expected me to go and represent their best interests. [Australian Olympic Committee president] John Coates has said if I don’t go, the whole bid could fail,” the Premier said.

Cr Schrinner also spoke to reporters on touching down in Japan, and said they were not taking anything for granted.

“We came over on a plane full of athletes, and they are all here to compete and do Australia proud,” he said.

“We are here to compete in a different way, to make sure that Brisbane, Queensland, gets the Games in 2032.

Ms Palaszczuk has committed to spending 14 days in hotel quarantine on her return to Brisbane, although she has avoided saying whether she would pay for the stay personally, or if the government would cover the cost.

Hotel quarantine for one adult in Queensland costs $3220 as of July 1, 2021, and is usually at the traveller’s expense.