‘Idiotic’ drink-driving off-duty paramedic, 36, who necked 10 pints of Guinness before veering onto the wrong side of the road and killing cyclist, 56, is jailed for five years

An ‘idiotic’ drink-driving paramedic who drank 10 pints of Guinness before veering into the opposite side of the road and killing a cyclist has been jailed for five years.

Robert Woodruff, 36, was desperate to get to a barbecue at the home of a female paramedic around seven miles away, despite not being invited, when he drunkenly got behind the wheel.

The drink driver, who had been a paramedic since 2014, then repeatedly checked his phone for messages in a ‘monumental lapse of judgement’ before the fatal collision on June 26 last year.

Father-of-five Richard Goodwin, 56, suffered horrific injuries in the ‘devastating’ crash and died at the scene near the rural village of Ottringham, East Yorkshire.

The property developer and former bank manager was carried 70 metres on the bonnet of the car before his body was found in undergrowth, a court heard.

A roadside breath test subsequently revealed Woodruff was more than double the drink drive limit, having earlier ignored requests from his wife not to drive home.

He was jailed for five years and four months at Hull Crown Court on Wednesday after pleading guilty to causing death by dangerous driving.

Woodruff, of Withernsea, was also banned from driving for seven years and eight months. 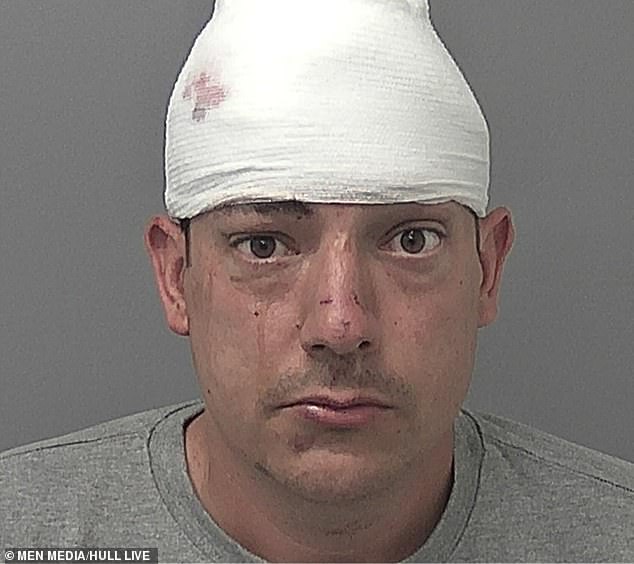 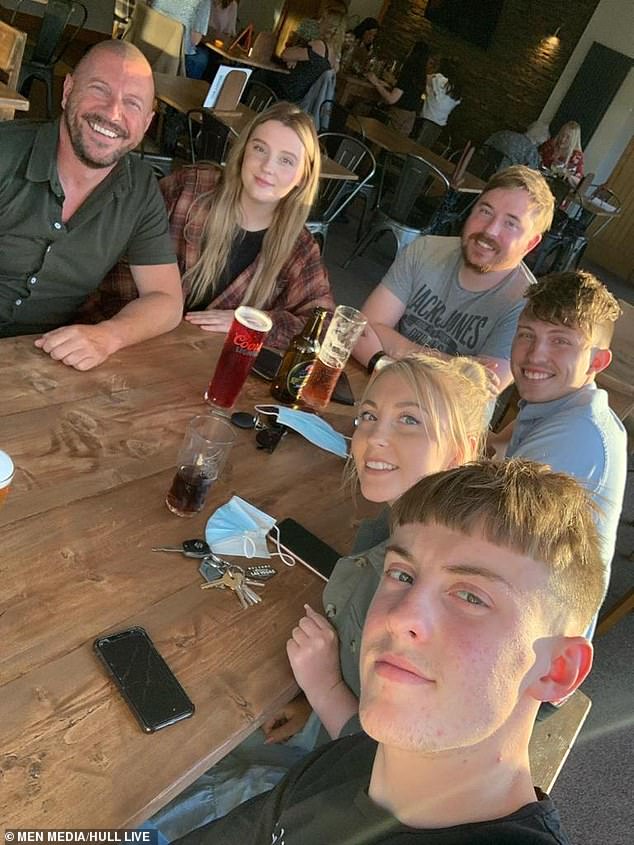 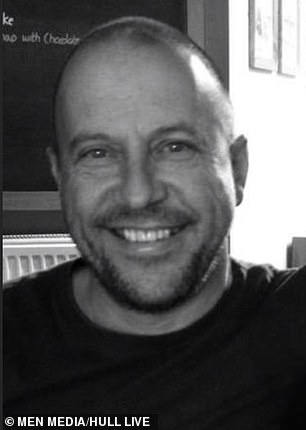 Jeremy Evans, prosecuting, told the court that Mr Goodwin had been cycling on the A1033 at Ottringham.

Woodruff, meanwhile, had spent the afternoon drinking at the Butterfly Inn pub, the Spread Eagle and the Pier Hotel in Withernsea before going home.

But after unsuccessfully attempting to get a taxi, he ignored the pleas of his wife and evaded her attempts to stop him.

The paramedic instead walked around the corner to where his red Nissan Juke SUV was parked and drove away at around 8.45pm.

Mr Goodwin was cycling in the opposite direction before Woodruff tailgated another car while speeding at 80mph.

One witness told the court that he was driving like an ‘idiot’ before gradually creeping onto the wrong side of the road and hitting a cyclist, seemingly without having applied pressure to the brakes.

There was a ‘loud bang’ when the impact took place, before Mr Goodwin was carried on the windscreen of the Nissan for around 70 metres.

The car continued onto a verge, became airborne, cleared a water culvert and eventually careered along undergrowth and a cycle path before crashing into the front garden of a nearby cottage.

Mr Goodwin’s body was found in the undergrowth.

Mr Evans told the court that it was ‘clear to those present and the police that there was no sign of life’.

Woodruff was dazed and confused following the crash and smelled strongly of alcohol.

He told police: ‘I f****d up. I have proper f****d up this time. I am in a proper mess. I was reaching down to check my phone. I was driving to see my girlfriend. I swerved.’

A subsequent roadside breath test revealed he had 77mcg of alcohol in 100ml of breath – more than double the legal limit of 35mcg. 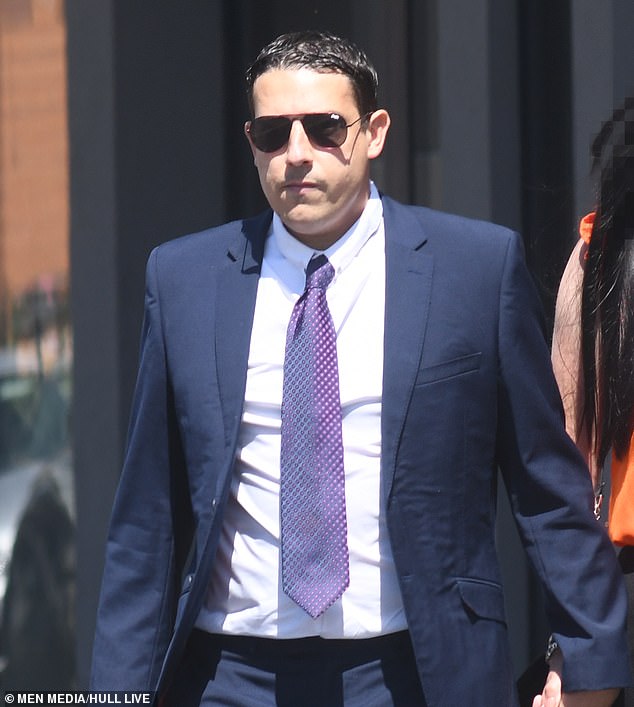 He had been a paramedic since 2014 and had driven ambulances without any previous issues, including having advanced and blue-light driver status with an ‘impeccable record’.

Woodruff was suspended as a paramedic following the crash, but obtained another job as a delivery driver.

They said they have suffered ‘unbearable pain and grief’, including nightmares and difficulty sleeping.

His youngest son Oliver, 19, told the court: ‘These past months have been the hardest months I have ever had to experience.’

His father was his ‘best friend’ who never failed to make him laugh and feel safe.

Oliver continued: ‘My Dad loved me and all my siblings,’ he said. ‘It has affected me in so many different ways. I lie awake thinking of what it must have been like for my Dad. I have dreams that he is still alive. I still send him text messages, knowing that he will never reply.’

Mr Goodwin’s eldest Samuel added: ‘My Dad was the heart and soul of my family, someone we could all rely on.

‘Five children that loved him and never got a chance to say goodbye. We are going to have to carry these emotional scars for the rest of our lives.’

He added that he has been affected ‘in so many different ways’ and still dreams that his father is still alive.

Samuel also said he still sends his father text messages, knowing that he will never reply, and described how his ‘has been irrevocably changed’ following the death.

Charlotte Baines, representing Woodruff, said in mitigation that he admitted making ‘unforgivable mistakes’ and apologised for destroying families by his ‘idiocy’ and its ‘devastating’ and ‘catastrophic’ results.

Woodruff, who was also injured in the crash, said: ‘I have lost my dream job. I apologise for these shameful actions. I have taken full responsibility for what I have done.’

He said he hoped the incident would be an ‘eye-opener’ for other drivers. 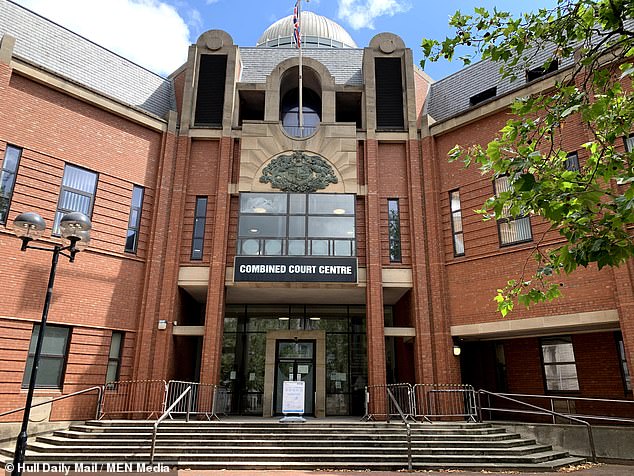 Miss Baines said that Woodruff had not minimised what he had done, adding: ‘He can never fully atone for his selfish and foolish actions that have had devastating consequences.

‘He has caused damage that he knows can never be repaired. He had a monumental lapse of judgement, to say the least. This offending is wholly and utterly out of this defendant’s character.

‘Up until June 26 last year, he was dedicated to the vocation of saving lives, not taking or destroying them. The public he once served, he has very gravely let down.’

Woodruff, a divorced father-of-two, was a lifeguard before becoming a paramedic.

Describing Mr Goodwin, Judge Mark Bury said: ‘He had achieved a great deal in his life, both professionally and domestically. He would have continued to excel at whatever he turned his life to, had he lived.’

‘He was truly a family man who had devotion and love for them. Richard’s death has left a great void in the lives of his family and that will never be filled. They have suffered greatly in the aftermath of their father’s death.’

And passing sentence, he added: ‘I believe you will always carry the guilt of your awful conduct. It’s a burden you deserve to bear but it’s nothing to the burden borne by others.

‘You veered across the road straight into the path of Richard Goodwin, who was a competent cyclist. He was correctly positioned on the road and correctly attired.

‘You didn’t even see him. The effects of that collision were catastrophic in their brutality.

‘As far as you are concerned, this is a disaster. Apart from this, you are a good person. You have dedicated yourself to saving lives, not wrecking them.’

Woodruff was jailed for five years and four months, banned from driving for seven years and eight months and will have to pass an extended retest before he can drive again following his release from prison.

Following the sentencing, Mr Evans said: ‘Words cannot adequately describe the absolute devastation and heartbreak this defendant has caused to the Goodwin family. Woodruff was a serving paramedic and a trained emergency response driver.

‘His unbelievably reckless actions that day are completely beyond comprehension. Equally, it is hard to imagine a more complete betrayal of the values of his profession as a paramedic.

‘Our hearts go out to the whole of the Goodwin family and we hope that the sentence Woodruff is beginning will be of some comfort to them in the months and years ahead. Our thoughts remain with them.’