Going to lunch with a friend, or a drink at your local. Such simple pleasures that everyone in Australia, except Melburnians, can enjoy. As the weeks and months have dragged on, frustration with the lockdown has grown. But there are grounds for optimism, and for reasons more than just "surely things will get better" wishful thinking.

On Friday, the number of positive COVID-19 cases in Melbourne was in single digits for only the second time since the second wave hit. At 13.2, the 14-day rolling average for Victoria continues to fall, and total active cases in Melbourne have dropped to 261. As Premier Daniel Andrews has said ad nauseam, fixing the health crisis must precede fixing the economy. That time is nearly with us, and life post-strict lockdown will offer some respite. 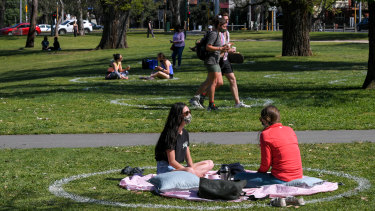 An easing of some restrictions and warmer spring weather has kicked off the process. Parks are filling with people reacquainting themselves with family and friends. Phones calls and social media have kept people in contact, but it's face-to-face human interaction that many have yearned for, even if it is from behind a mask.

More is on the way. This week, Melbourne City Council showed off its plans for reinvigorating the city centre, with alfresco dining on footpaths, streets and in parking spaces across 16 new outdoor dining precincts. It's a tantalising prospect that is sure to lure many back into the city. Almost a million people used to travel into the CBD each day. Shopping precincts and eateries will be desperate for them to return.

But it will not just be a chance to eat out and some retail therapy that could get you out of the house. While the loss of the AFL grand final to Brisbane has hurt, most other events on Melbourne's sporting calender will stay put. There is work being done to welcome crowds at Flemington for this year's Melbourne Cup Carnival. With more time on their side, the Melbourne Cricket Club and Cricket Australia are lobbying for up to 30,000 to attend the the Boxing Day Test between Australia and India. To see the MCG come back to life would be a day to celebrate. Early next year, the Australian Open is also on track for tennis lovers.

The much-loved Myer Christmas windows are also back on, a month after the retailer announced the 65-year-old tradition had been cancelled due to the restrictions. Organisers have hinted that the festive display on the Bourke Street Mall will have a "very Melbourne" theme this year. That is very appropriate.

How fast we can reach that "COVID normal" that the Premier talks about is very much a live debate. While some health experts believe some of the measures still in place are too strict – the need to maintain the five-kilometre rule has some people scratching their heads – Mr Andrews appears determined to keep to his slow, safe and steady mantra.

While Mr Andrews often defers to medical advice, there must also be some political calculation. He would understand full well that a third wave would most likely result in his demise as Premier. The level of dysfunction publicly aired during the hotel quarantine inquiry that led to the outbreaks would not be tolerated again. And rightly so.

Mr Andrews needs to get this right. Melburnians have been incredibly patient, but it's time for us to join the rest of Australia. It's time we went out to lunch. We deserve it.