PIERS MORGAN: Narcissistic Naomi’s cynical exploitation of mental health to silence the media is right from the Meghan and Harry playbook of wanting their press cake and eating it

The big-serving Japanese star is the first Asian woman to become No1 in the world rankings and has won four Grand Slam singles titles.

She is also the highest-paid female athlete in the world, raking in $55.2 million in the past 12 months, $5.2 million from tennis winnings and $50 million from endorsement deals with the likes of Nike, Beats by Dre, Mastercard and Nissin.

Unfortunately, Ms Osaka is also an arrogant spoiled brat whose fame and fortune appears to have inflated her ego to gigantic proportions.

How else to explain her extraordinary decision to announce she will no longer participate in media press conferences, supposedly to protect her mental health?

Petulant Osaka was fined $15,000 for refusing to appear in front of the media during the current French Open Roland-Garros tournament, and a joint statement from all four Grand Slam organisers said she will face ‘more substantial fines and future Grand Slam suspensions’ if she continues her boycott.

Of course, given that she earns around $6,000 an hour, Osaka will recoup this fine while she sleeps tonight, rendering the fine utterly meaningless.

What’s not meaningless is her frankly contemptible attempt to avoid legitimate media scrutiny by weaponizing mental health to justify her boycott. 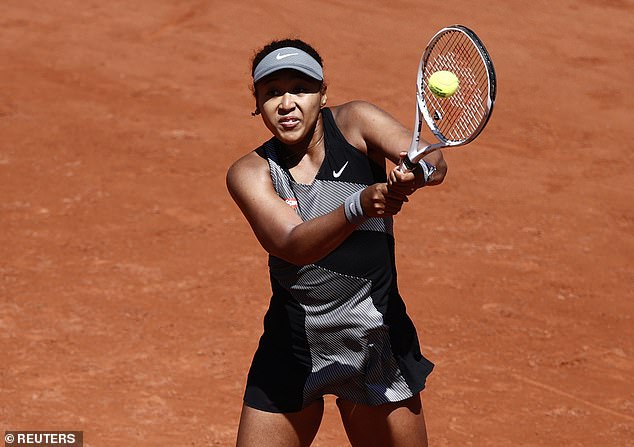 Naomi Osaka is a brilliant tennis player. Unfortunately, Ms Osaka is also an arrogant spoiled brat whose fame and fortune appears to have inflated her ego to gigantic proportions. How else to explain her extraordinary decision to announce she will no longer participate in media press conferences, supposedly to protect her mental health? 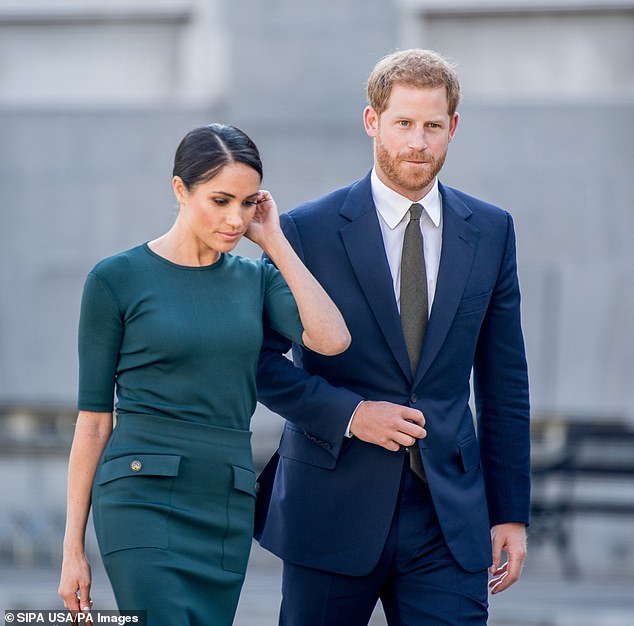 This is straight out of the Meghan and Harry playbook of wanting to have the world’s largest cake and eating it, by exploiting the media for ruthlessly commercial self-promotion but using mental health to silence any media criticism

In an Instagram statement, Osaka wrote: ‘I’ve often felt that people have no regard for athletes mental health and this rings very true whenever I see a press conference or partake in one. We’re often sat there and asked questions that we’ve been asked multiple times before or asked questions that bring doubt into our minds and I’m just not going to subject myself to people that doubt me. I’ve watched many clips of athletes breaking down after a loss in the press room and I know you have as well. I believe that whole situation is kicking a person while they’re down and I don’t understand the reasoning behind it. Me not doing press is nothing personal to the tournament and a couple of journalists have interviewed me since I was young so I have a friendly relationship with most of them. However, if the organizations think that they can just keep saying, ‘do press or you’re gonna be fined’, and continue to ignore the mental health of the athletes that are the centerpiece of their cooperation than I just gotta laugh.’

One thing’s very clear: this has got nothing to do with mental health.

What Osaka really means is that she doesn’t want to face the media if she hasn’t played well, because the beastly journalists might actually dare to criticize her performance, and she’s not going to ‘subject’ herself to ‘people that doubt me.’

And the problem with the French Open is that it takes place on clay, her statistically weakest surface, so she probably won’t win it, and when she loses, she’ll be asked why she isn’t as good on clay.

In other words, she has no problem with the media lauding her undeniable brilliance with a tennis racket, right to the point they say anything negative, however reasonably and fact-based, because then they’re damaging her mental health.

This is straight out of the Meghan and Harry playbook of wanting to have the world’s largest cake and eating it, by exploiting the media for ruthlessly commercial self-promotion but using mental health to silence any media criticism.

And I’m sorry (not really…) if this offends any of the delicate little snowflakes out there who believe all this self-serving garbage, but Osaka’s antics stink of a stupendous ego raging out control. 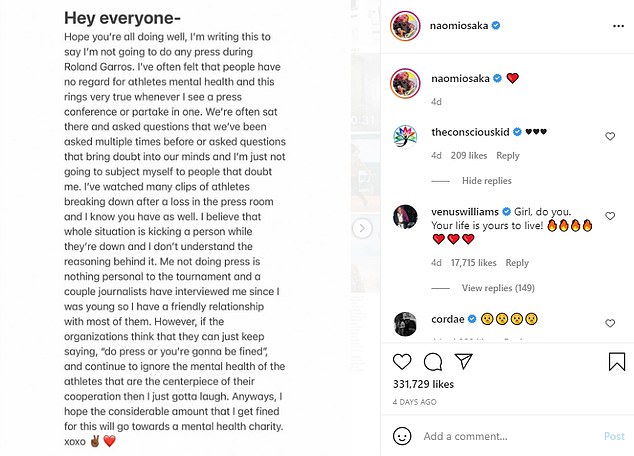 The journalists she is lambasting earn a tiny fraction of what she earns, yet nobody can point to anything that’s ever happened in a Naomi Osaka press conference which could be remotely construed as unfair, rude or potentially damaging to her mental health.

In fact, the tennis media are generally regarded as one of the most professional and respectful groups of journalists in world sport.

So, for them now all to be tarred with the brush of uncaring incompetents just because they won’t suck up to Ms Osaka in the unctuous non-critical way she expects, is disgraceful.

Commendably, and ironically, many other top tennis stars have criticised her stance.

He was backed by Billie-Jean King who said: ‘I have always believed that as professional athletes we have a responsibility to make ourselves available to the media. In our day, without the press, nobody would have known who we are or what we thought. They helped build and grow our sport into what it is today.’

It’s the largely exultant and celebratory media coverage that’s made Naomi Osaka a fabulously rich superstar – and allowed her to be a high-profile social issue activist too, using the media to promote her support for organisations like Black Lives Matter.

But rather than feel grateful, she now wants to control how the media speaks about her like some kind of dictator.

Some tennis legends were far harsher in their critique of Osaka’s conduct.

‘Why should she be treated any differently to the other players?’ Mats Wilander, the former world No 1, told Eurosport. ‘She definitely has to do press. We are all struggling with mental issues these days during the pandemic, but Naomi, I think you need to reconsider or, I would say, don’t play in the tournament until you are ready to face the job.’

The top-ranked woman player, Ash Barty, suggested Osaka take herself a tad less seriously: ‘Press is part of the job. We know what we sign up for as professional tennis players. At times, press conferences are hard, of course, but it’s also not something that bothers me. … For me, personally, it doesn’t keep me up at night what I say and hear or what you guys ask me. So, I try and make it a little bit lighter and have a bit of fun with you guys.’

Daniil Medvedev, the No. 2-ranked man in tennis, even said that press scrutiny can help his mental health – finding it cathartic after a loss.

‘I try always to come to a press conference,’ he said, ‘bad mood or good mood. And I feel like, even sometimes in the bad mood, I can be in a better mood after talking to you guys.’

This Osaka nonsense sadly epitomises the state of the woke-ravaged world today.

We’re seeing mental health being used more and more as an excuse for deplorable behaviour.

The Duke and Duchess of Sussex use it constantly as a protective shield to launch savage attacks on the Royal Family, and to get journalists like me who don’t believe them fired.

A celebrity TV doctor in the UK, Christian Jessen, is facing bankruptcy after losing a $500,000 libel case in which he laughably blamed his mental health for why he posted a tweet falsely claiming a senior Northern Ireland politician had been having an extra-marital affair.

He even used it to try to persuade people to crowdfund his costs, saying: ‘It’s obviously not helped my mental health in any way at all and while I’m keeping afloat at the moment, I can feel it cracking.’

Oh, diddums. Anyone would think Jessen was the real victim, not the woman he smeared with vicious lies.

What’s made people ‘uncomfortable’ is you trivialising mental illness to protect yourself from fair media criticism.

It’s the worst kind of cynical exploitative bullsh*t which will distract attention from those with real mental illness who desperately need help.

And to anyone who dares criticise me for saying this, STOP – you’re damaging my mental health.