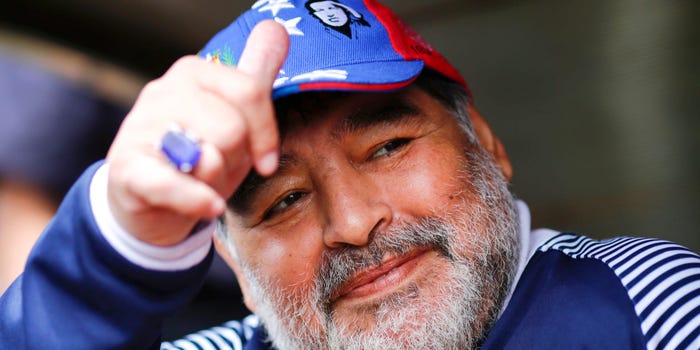 Argentinian soccer icon Diego Maradona died last week after experiencing a heart attack at his home — and in the days since the court of the public opinion has already thrown blame at his personal doctor.

Police raided the home of Maradona's neurosurgeon and personal doctor, Leopoldo Luque, on Sunday, seizing medical records, laptops, and other documents as part of their investigation into the 60-year-old soccer icon's death.

Luque, who had been Maradona's doctor since 2016, hasn't officially been charged with any crimes, and according to Reuters, the case is currently listed as an "investigation of causes of death."

But Luque seems to have already been convicted in the court of public opinion.

An Argentine media site falsely reported that Luque has been charged with "wrongful death," while other Spanish-language sites have said Luque is accused of "culpable homicide" and "negligence and manslaughter."

According to The Times of London, a live-in nurse caring for Maradona after his surgery gave testimony saying Luque had argued with Maradona six days before his death and said she was "made to lie" by the doctor about a morning check-up the day the soccer player died.

One justice system source told the La Nación newspaper that investigators were looking for specific "evidence" and "irregularities" in Luque's care of Maradona.

"If irregularities in Maradona's home medical care are confirmed we might be looking at the crime of manslaughter," the source said, according to a translation from The Guardian.

The Guardian reported that another source told La Nación newspaper: "Because Luque was Maradona's personal doctor, the decision was taken to search his home and surgery in search of documents that might determine whether there were irregularities in his treatment at home."

Luque denied all wrongdoing in a statement on Monday, saying he felt "terrible" that his "friend has died."

"I know what I did with Diego and I know how I did it. I can explain it all. I'm absolutely certain I did the best that could have been done for Diego," Luque was quoted saying, according to the Argentinian news website Infobae.

Maradona, who starred for the Napoli and FC Barcelona club teams and for Argentina's national team, underwent brain surgery for a subdural hematoma, with Luque as his surgeon, on November 3.

NPR reported that Luque asked him to go to a rehabilitation center after the surgery, but he declined.

Maradona, who experienced numerous health problems over the past two decades made worse by heavy drug and alcohol use, was discharged from the hospital on November 11 and experienced his fatal heart attack on November 25.

Alfredo Cahe, a former personal physician for Maradona, told Argentinian news Telefé Noticias after the soccer star's death that he disagreed with the decision to discharge him from the hospital. Cahe called Maradona's death "unusual," and said a doctor should have been in the room with him.

The Guardian reported that Luque was the person who called emergency services to Maradona's home, and Maradona's lawyer, Matias Morla, said on Twitter that it took more than half an hour for an ambulance to arrive.

Prosecutors later pushed back on that timeline and said the ambulance took 12 minutes to arrive.

Luque said at a news conference over the weekend that he "did everything [I] could."