Police chiefs fear up to 35 illegal raves organised across London in place of the cancelled Notting Hill Carnival could cause chaos this bank holiday weekend.

Officers are concerned they will have bottles pelted at them as they try to break up the parties – many of which have been branded the ‘real Notting Hill Carnival’.

Scotland Yard detectives are hoping to stop the gatherings taking place by scouring social media in an operation informally branded ‘Not the Notting Hill Carnival’.

It comes amid police having to break up a series of illegal raves across Britain over the weekend, including in Huddersfield, Birmingham, Blackburn and Manchester.

And officers are concerned about parties in London as new laws come into force on Friday which mean organisers of illegal gatherings can be fined up to £10,000. 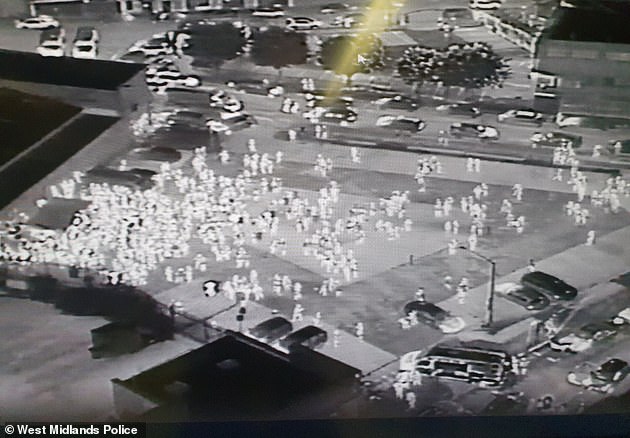 More than 200 revellers flouted restrictions at a rave in Birmingham over the weekend. Police dealt with more than 70 street and house parties in the city breaking Covid rules on Saturday 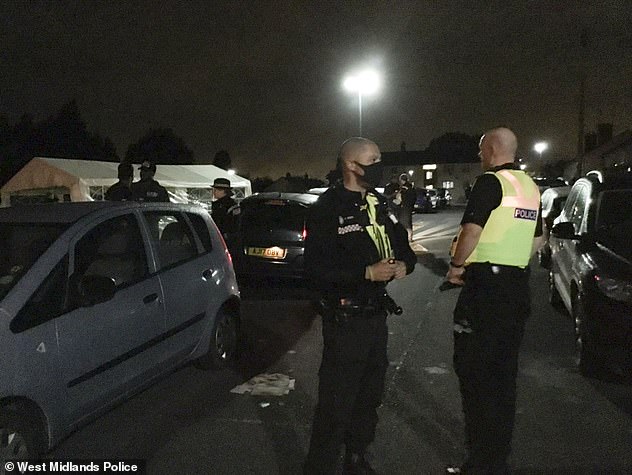 Ken Marsh, chairman of the Metropolitan Police Federation, said the force was ‘very, very concerned’ about intelligence suggesting dozens of raves are due to take place.

He told the Daily Telegraph: ‘If the weather is half decent, we’re going to have a real problem. We already know of around 35 unlicensed events to replace the Notting Hill Carnival popping up all over London.

Rave organisers will be fined up to £10,000 from this Friday

New punishments for people organising and attending raves will come into force from this Friday, just in time for the Bank Holiday weekend.

People facilitating or organising illegal raves, unlicensed music events or any other unlawful gathering of 30 people or more may face a £10,000 fine.

Participants can continue to be issued with fines of £100, while those who have already been fined will see the amount double on each offence, up to a maximum of £3,200.

Fines for not wearing face coverings where it is mandated are also set to double for repeat offenders from Friday, starting at £100 and doubling to a maximum of £3,200 for each repeat offence.

Home Secretary Priti Patel said: ‘These gatherings are dangerous and those who organise them show a blatant disregard for the safety of others.

‘I am pleased the police have already stepped up their response and I am giving them the tools they need to continue to keep us safe.

‘We will continue to crack down on the small minority who think they are above the law.’

‘We’re trying to prevent them happening by looking at social media and other things, but it’s a pretty hapless task.

‘What can we do? It’ll end up with more police officers having bottles thrown at them, and putting themselves in harm’s way.’

The weather forecast for the West London area this bank holiday weekend is sunshine and temperatures of up to 64F (18C), but the Met Office said there is unlikely to be any heat building.

The Notting Hill Carnival is an event regularly blighted by violence and drugs, with 353 people arrested and 30 police officers injured at last year’s festival.

There were 111 arrests on the Sunday and 242 on the Monday at the 2019 festival – including 162 for drug offences, 34 for possession of offensive weapons and 37 for assaulting police.

While this year’s event has been cancelled due to the coronavirus pandemic, an online version will instead be streamed without the crowds.

It comes as police were pelted with missiles in West Yorkshire over the weekend as they tried to disperse 300 people from an illegal rave in a town subject to a local lockdown.

The ‘hostile’ reaction from the revellers in Deighton, Huddersfield, on Saturday night was in stark contrast to local residents – who came out of their homes to applaud officers.

The confrontation came days before new laws come into force which mean organisers of illegal gatherings can be fined up to £10,000.

From Friday those organising illegal raves in England will face fines of up to £10,000. People breaking social distancing rules repeatedly will see fines double each time up to a maximum of £3,200.

The measures have been brought in before next weekend’s long August bank holiday.

Police in Birmingham have also revealed they dealt with more than 70 street and house parties breaking coronavirus rules on Saturday. 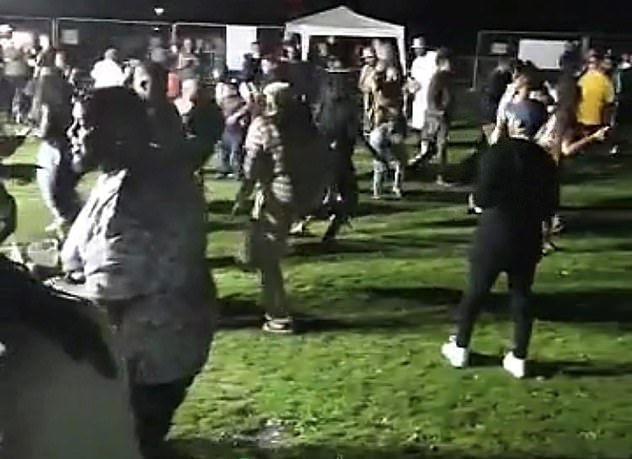 They arrived at one large street party in Northfield, on the outskirts of the city, just after midnight to find two marquees had been set up with a DJ providing the entertainment.

The force tweeted: ‘Most people understand why we are doing this – stay safe – don’t risk spreading the virus.’

Home Secretary Priti Patel has backed police clamping down on the illegal raves.

She said: ‘These gatherings are dangerous and those who organise them show a blatant disregard for the safety of others.

‘I am pleased the police have already stepped up their response and I am giving them the tools they need to continue to keep us safe.

‘We will continue to crack down on the small minority who think they are above the law.’

Public anger at the behaviour of ‘covidiots’ in Huddersfield has been fuelled by the fact it’s situated in Kirklees, where tougher lockdown restrictions are in force to reverse a spike in the virus. 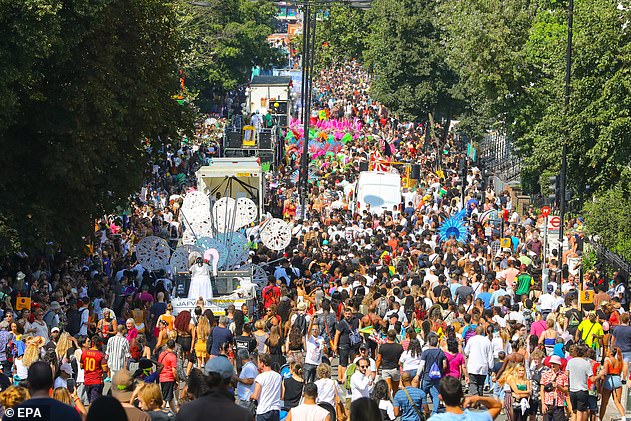 Thousands of people attend the Notting Hill Carnival in West London on August 26, 2019 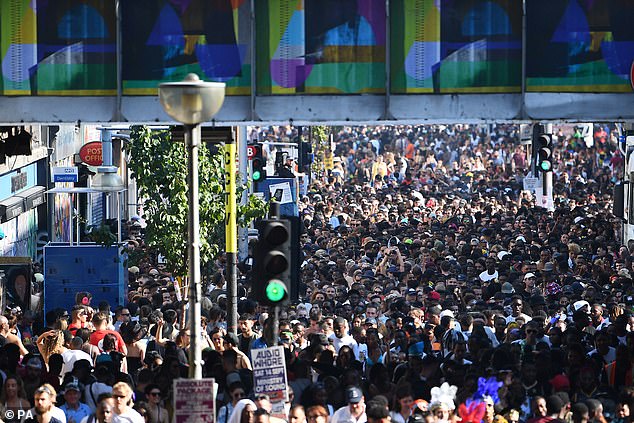 Huge crowds during a parade at the Notting Hill Carnival in West London on August 25, 2019 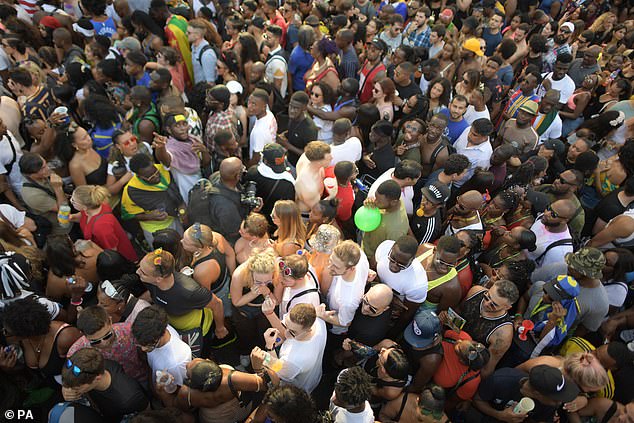 People pack the streets of West London during Notting Hill Carnival on August 25, 2019

West Yorkshire Police said officers succeeded in breaking up the rave in Deighton on Saturday evening despite an angry response from revellers.

The force said in a statement: ‘When officers arrived there were around 300 persons present many of whom were hostile and missiles were thrown at officers.

‘The music was quickly turned off with the equipment seized and the attendees were dispersed from the area.

‘No officers were injured and they were met with applause from residents in the area.’ Socialising between people from mixed households is restricted to a maximum of six people.

Evidence suggests young adults have been a significant factor in the recent rise in daily positive tests. Police have responded to scores of complaints about illegal parties across the country.

In London the Metropolitan Police have responded to more than 1,000 illegal raves since the end of June.

Earlier this month West Midlands Police shut down 125 parties in a single weekend, including one attended by 600 people. 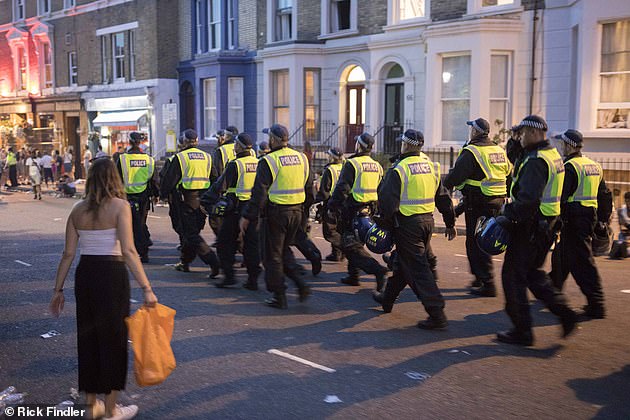 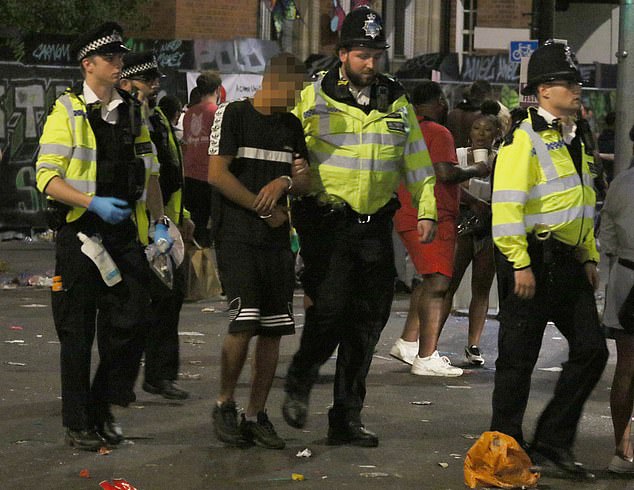 Police lead away a reveller in handcuffs during the Notting Hill Carnival on August 25, 2019 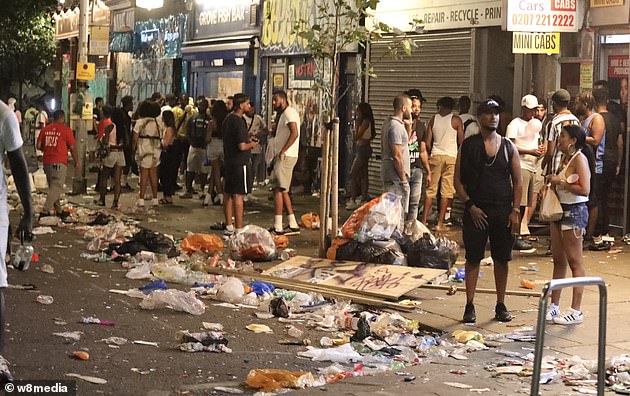 Piles of rubbish strewn across the road following the Notting Hill Carnival on August 26, 2019

Commander Ade Adelekan, the National Police Chiefs’ Council lead for unlicensed music events, said: ‘These events are hosted without regard for the safety of those attending, and police have observed cases of anti-social behaviour, sales of drugs and gang activity.

‘To the organisers of this sort of activity, I strongly advise that you seriously consider the risks you’re creating for everyone in attendance and the wider community.

‘There is a risk of prosecution for those who organise these events and equipment will be seized.’

Around 50 people were at the gathering at a house, which had a gazebo set up with loud speakers, music equipment and party lights, Greater Manchester Police said.

A man aged 33 was arrested for damaging two police cars and three other men were arrested for their behaviour in refusing to leave the party.

Also over the weekend, around 150 people had to be dispersed by police at Entwistle reservoir, between Blackburn and Bolton, both areas where extra restrictions are in place due to the pandemic.

The man who organised the event was arrested by officers and had his equipment taken off him.

This comes Police drone footage shows hundreds of revellers at an illegal carpark rave in Birmingham as police shut down parties across the region.

West Midlands Police have issued reminders of the need for social distancing after being called to more than 70 unlicensed street and house parties overnight.

Around 200 people were seen gathering in the city centre, around Hampton Street.

This is despite urgent warnings that Birmingham is one step away from ‘lockdown-style restrictions’.

One large party in Northfield, Birmingham, saw two marquees set up in the street as a DJ blasted music for dozens of revellers just after midnight on August 23.

Officers dispersed the party, instructing the party-goers to pack up and go home.

Police chiefs warned: ‘We are still in a pandemic’ as they continued to crackdown on illegal street parties throughout the night.

This comes on the last weekend before organisers of these events face a £10,000 fine for setting up the gatherings.