The Princess of Wales is tipped to become a patron of Welsh football following criticism from Welsh actor Michael Sheen over the Prince of Wales supporting England during the World Cup in Qatar.

Princess Kate could take on the role after also becoming the patron of the English Rugby Union and Rugby League in February.

The Princess cheered on the England teams in the women’s Rugby Union World Cup and the men and women’s squads in the Rugby League World Cup in October and November.

A source told The Express: ‘It’s being discussed as part of a much bigger review of royal patronages.’

Prince William rejected Mr Sheen’s criticism, saying that he would be supporting both England and Wales during the tournament.

The Prince, who is the President of the English Football Association, handed out shirts to the England squad before they set off to the Qatar ahead of the competition kicking off on Sunday. 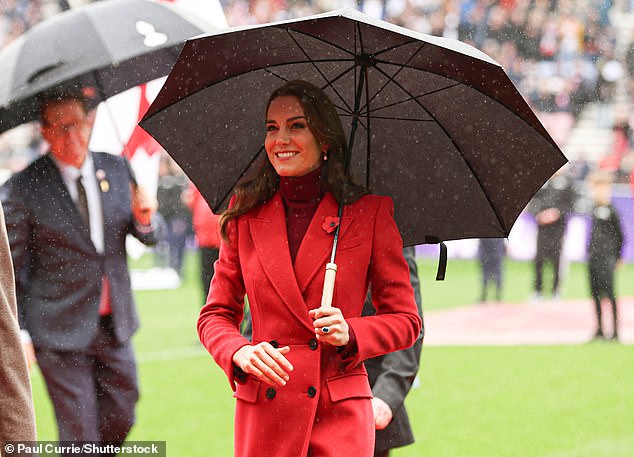 The Princess of Wales is set to become the Patron of the Welsh Football Association, a role previously held by the Queen 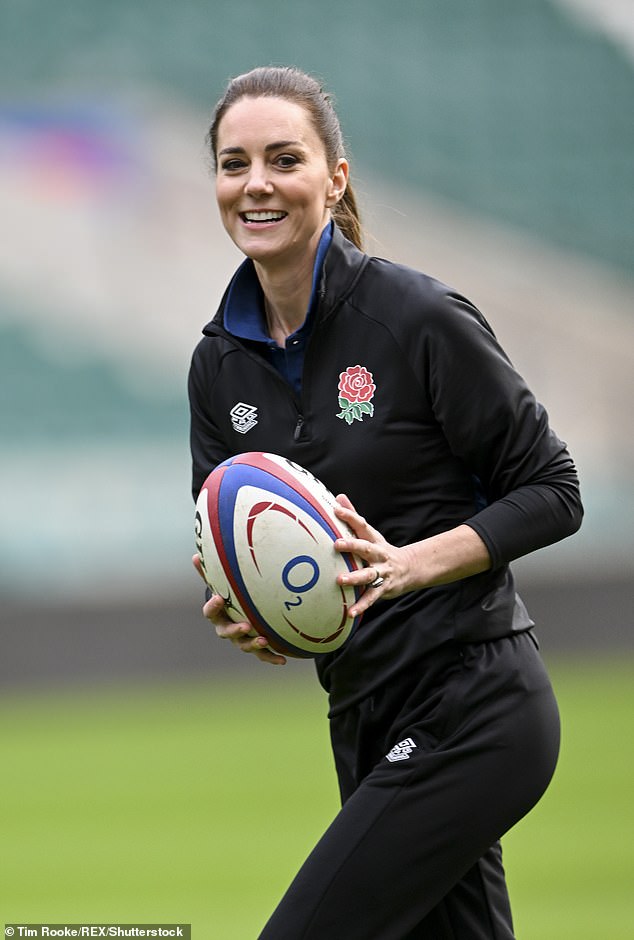 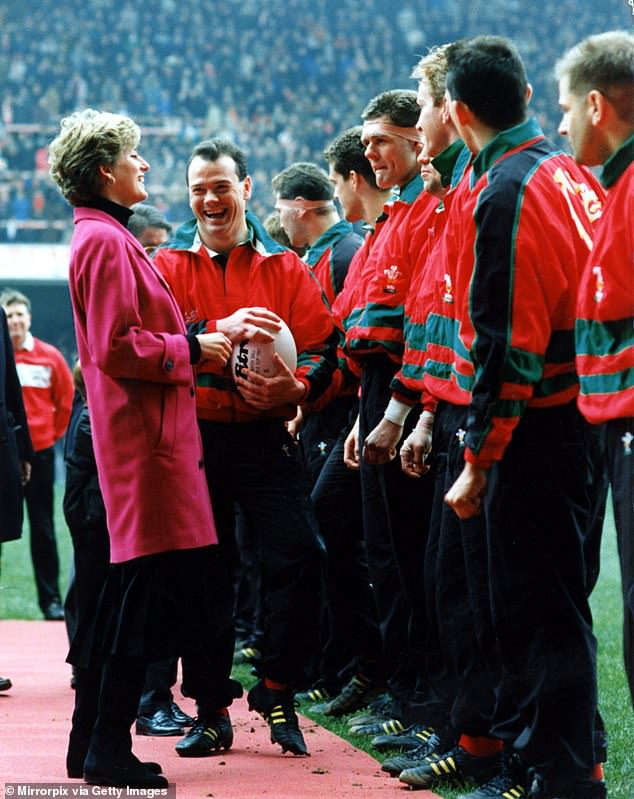 Diana, Princess of Wales was also a keen supporter of the Wales rugby team. Pictured: Diana with the Welsh team ahead of a match in 1992

Mr Sheen argued it was ‘entirely inappropriate’ for William to support England while holding the title Prince of Wales.

Princess Kate may now relieve the tension over the Welsh national team by becoming the figurehead of the Football Association of Wales, a role previously held by Queen Elizabeth II.

England and Wales will play in the same group in the World Cup as the Welsh national team joins the competition for the first time since 1958.

In a video shared online by the English FA, the Prince of Wales proclaimed to the England squad: ‘We’re all rooting for you.’

But taking to Twitter, Sheen, whose acclaimed roles have included Tony Blair, football boss Brian Clough and broadcaster David Frost, thundered: ‘He can, of course, support whoever he likes and as President of the FA his role makes [the] visit understandable.

‘But surely he sees holding the title Prince of Wales at the same time is entirely inappropriate? Not a shred of embarrassment? Or sensitivity to the problem here?’

William then hit back at Sheen, telling reporters on a visit to Cardiff that he would be supporting both England and Wales. 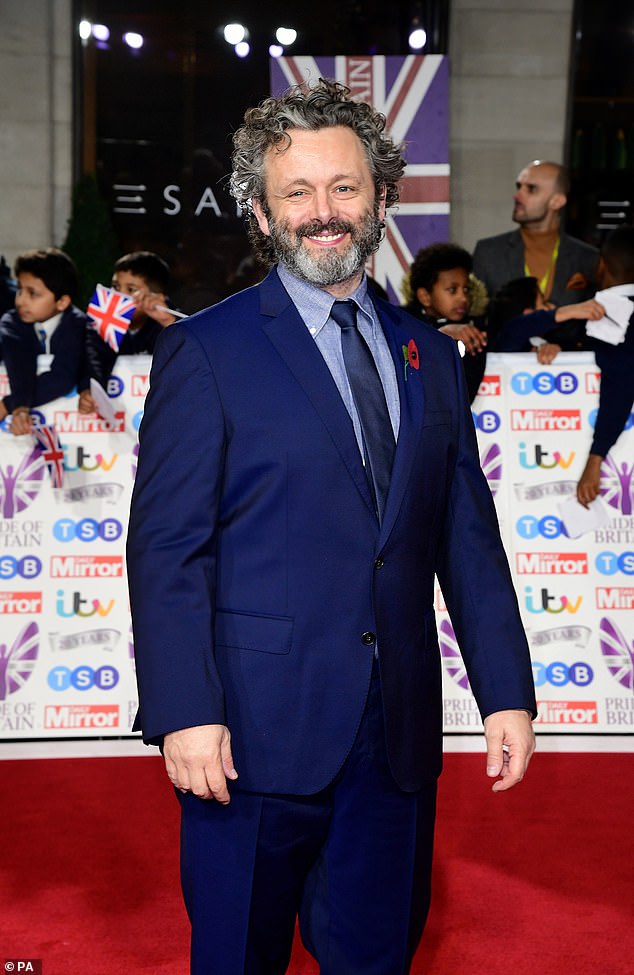 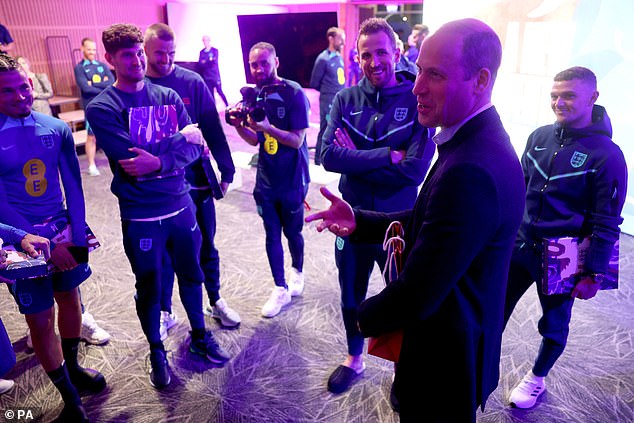 Michael Sheen described Prince William’s visit to the team’s training centre on Monday, where he presented them with their shirts for the World Cup in Qatar, as ‘entirely inappropriate’

He said: ‘I support both. I support England more in the football, but Wales in the rugby.

‘When I was growing up Wales didn’t get through to the tournaments but I will be supporting them all the way through the process.

‘Getting to the World Cup is a big deal and I’ll be supporting Wales through the process.’

The Prince has supported the Welsh rugby team since he was brought to Wales matches as a child by his mother Diana, Princess of Wales, herself a keen supporter of the squad.

Sheen’s comments have divided his fans and football fans alike, with some supporting his outspoken criticism of the monarchy. But others have pointed out Prince William’s role as head of the English FA and said Sheen’s post was ‘desperate’.

Just weeks ago Sheen gave a spine-tingling talk to his national team, erupting into ‘Yma O Hyd’ which means ‘we’re still here’ – the title of a patriotic song and an anthem for Welsh football fans.

Sheen said the King and Queen Consort’s recent visit to Wales could be seen as ‘insensitive to the point of insulting’.

According to the Welsh actor, because the trip fell on an important historic date, it could be seen as ‘insensitive’ if the royals chose that date on purpose.

September 16 marks Owain Glyndŵr day. The same day in 1400 is when Glyndŵr began a 15-year uprising against the then-king of England, Henry IV, after which his followers would proclaim him Prince of Wales.

The revolt is considered to be the last Welsh war of independence and Glyndŵr has since been viewed as a figurehead of Welsh nationalism and the independence movement.

Normally, thousands celebrate the life and legacy of the ‘rebel’ Prince of Wales.

However, following the death of Queen Elizabeth II, a number of Glyndŵr day events were cancelled, prompting disappointment and anger in some communities, with some hosting their events.

Sheen handed back his OBE over plans to make William the next Prince of Wales.

But Sheen described the tradition as ‘a sort of symbolic act of rebuke or punishment and humiliation’.

Last year Sheen revealed he had become a ‘not-for-profit’ actor after putting his homes up for sale to help the homeless.

The actor made the ‘liberating’ decision to sell two mansions – in the US and the UK – and move back to Wales in order to raise funds for those in need.

Michael told the Big Issue how he stepped in to bankroll the 2019 Homeless World Cup in Cardiff when funding for the £2m project fell through at the last moment.

The star has already pledged £50,000 over five years to fund a bursary to help Welsh students go to Oxford University.

In 2020, Sheen handed back his OBE eight years after receiving it from the Queen, saying he wanted independence for his home country.

The actor said he made the controversial move to avoid looking a hypocrite before giving a lecture on the history of his native Wales – including ‘past wrongs’ committed by England ‘to fracture us, to control us, to subdue us’.

And he called for the tradition of giving the heir to the throne the title of Prince of Wales to be scrapped when Charles becomes king, saying it was a ‘humiliation’ for the Welsh. He handed it back after researching Welsh history while preparing to give the lecture to students in 2017, where he claimed that Wales should become independent from the UK.

He said he told the Palace at the time that he did not mean to be rude and felt ‘incredibly honoured’ to have received it back in 2009.

The couple parted ways in December 2017 after four years together.

He said they split because of long distance – as he went back to the UK to explore why Brits voted in favour of Brexit, while Sarah chose to tour the US to interview people in the wake of Trump becoming president.

Sheen said that he and Sarah felt in ‘different ways’ that they wanted to ‘get more involved’ in the political climate after Brexit and Trump’s election.