This is the shocking moment a serial thief was caught on CCTV placing his coat over a bag in a Heathrow airport cafe before walking away with it.

Kiberom Fikadu, 31, was jailed for two years and four months at Isleworth Crown Court today after he spent December and January targeting travellers.

A regular at coffee shops at Paddington Station, Heathrow Airport, and Central Bus Station, Fikadu was reported for acting suspiciously on January 10.

A member of staff thought he was about to steal a bag and called the police.

In CCTV footage released by police today, Fikadu can be seen stealing a bag at a coffee shop in the arrivals section of Heathrow Airport on January 3, 2019.

The victim places her bag on the seat next to her and turns her back to speak to a friend. 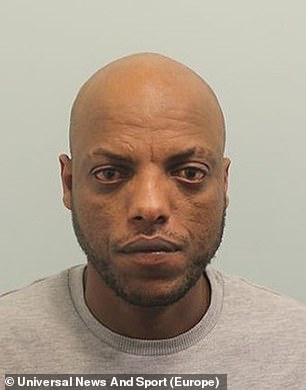 Kiberom Fikadu, 31, was jailed for two years and four months at Isleworth Crown Court today after he spent December and January targeting travellers

While she is eating, Fikadu places his coat over her bag, looks around to see if anyone is looking, and gradually pulls the chair away from the table.

Taking another glance around he picks up the bag, covered by his coat, and walks away.

Investigating officer, PC Barry Munnelly of the Met’s Aviation Policing Command, said: ‘Fikadu looked for people who were either reading, busy chatting or eating, and helped himself to their belongings.

‘His actions are a reminder of the importance of staying alert and keeping your possessions in sight at all times when you are travelling.’

PC Munnelly was one of a number of officers to attend the Central Bus Station on January 10 after receiving the call from the concerned staff member.

When PC Munnelly arrived, he found Fikadu hiding behind a newspaper and almost immediately recognised him as a man caught on CCTV stealing a suitcase from Heathrow Airport on 4 January.

The officers searched Fikadu and found he was carrying two passports which had that month been reported as stolen.

He was also carrying a lock knife, two laptops and cannabis. 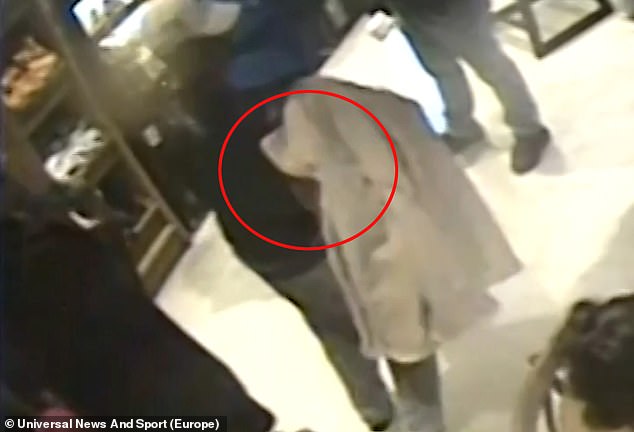 Taking another glance around he picks up the bag, covered by his coat, and walks away

Fikadu pleaded guilty to two of the offences but pleaded not guilty to theft of the passports and the suitcase.

Meanwhile, the Aviation Policing Command set about investigating where the laptops had come from, using the serial numbers on them to identify they had been reported as stolen from a coffee shop at Heathrow Airport on January 9 and from a patron at a pub in Paddington Train Station on December 11.

December 11: Stole a laptop from a woman in a pub at Paddington Train Station.

January 3: Caught on CCTV stealing a bag from a woman at a coffee shop at arrivals in Heathrow Airport.

January 4: Stole a suitcase at Heathrow.

January 6: Stole a wallet from a train in Sussex. The next day he left it at a money exchange in Heathrow.

January 9: Stole a laptop from a coffee shop at Heathrow.

January 10: Coffee shop staff member who was suspicious Fikadu would steal a bag called police and he was arrested at Heathrow.

At the pub at Paddington Train Station the victim reported being followed by a man who sat opposite her at a table.

While she read her newspaper, he pulled her bag – containing her laptop – towards him under the table before covering it with a newspaper of his own and walking out.

The APC also identified Fikadu as the culprit of the theft of a wallet from a man on a train in Sussex on January 6, 2019.

Fikadu was caught on CCTV accidentally leaving the wallet behind at a money exchange shop at Heathrow Airport the following day.

The wallet had been retained by diligent staff who realised that the driving licence photo of the owner of the wallet was not the same as Fikadu, and called the police.

Fikadu was charged with the theft of the laptops and handling stolen goods – namely the wallet on February 18.

He pleaded guilty to these offences at North West London Magistrates’ Court on February 22.

After refusing to leave his prison cell, Fikadu was found guilty of the thefts of the passport and suitcase on February 27. One count of theft of a mobile phone was dismissed.

Speaking after sentencing today, PC Barry Munnelly said: ‘Each of Fikadu’s thefts caused distress and disruption to the victims. I am pleased that we have been able to bring him to justice.’