Three people are dead after the Taliban forcefully shut down a protest, just one day after attempting to present a more moderate face to the world following their stunning rise to power on the weekend.

The United Arab Emirates also confirmed that Afghan President Ashraf Ghani, who abandoned his post on Sunday when Taliban negotiators sought his unconditional surrender, had relocated there. 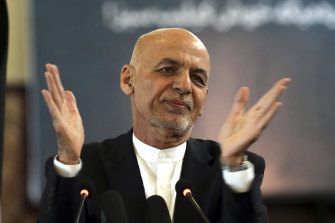 Afghan President Ashraf Ghani has been granted a humanitarian visa in the United Arab Emirates.Credit:AP

The UAE has granted a humanitarian visa to the 72-year-old, who said he fled Afghanistan because he wanted to avoid bloodshed.

The Taliban has attempted to cast a friendlier face by promising they will not harm or seek revenge against those involved in the US-led military operation that lasted two decades.

However, that was put to the test on Wednesday when protests broke out in Kunar, Khost and Jalalabad, Afghanistan’s fifth-largest city.

In Jalalabad, east of Kabul, demonstrators lowered the Taliban flag – a white banner with an Islamic inscription – and raised the black, red and green national flag at the town square in front of a cheering crowd.

Video recorded at the scene shows the Taliban firing into the air and breaking up the crowd by attacking people with batons.

Babrak Amirzada, a reporter for a local news agency, said he and a TV cameraman from another agency were beaten by the Taliban as they tried to cover the unrest.

Two witnesses and a former police official told Reuters that Taliban fighters killed at least three people and injured more than a dozen.

The bloodshed comes despite assurances from the Taliban that they would not seek revenge or harm anyone who worked or fought with US forces. Many remained sceptical that those promises would be kept. 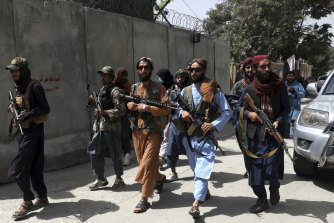 Taliban fighters also surrounded Kabul international airport on Wednesday and set up checkpoints, a strong deterrent to those trying to leave the country.

One NGO told The Sydney Morning Herald and The Age that Afghans they were trying to evacuate were being blocked from getting through.

The Taliban has repeatedly stressed that Afghans should stay in the country but has said foreigners and diplomats will be granted a safe departure.

A senior Taliban official said the checkpoints were set up solely to prevent people from rushing the tarmac following chaotic scenes on Monday, when several people fell to their death as they tried to stow away on a US military aircraft. However, German defence officials said that the Taliban were only letting through members of the international community.

British Prime Minister Boris Johnson told the Commons that “at the moment” the Taliban were allowing evacuations to go ahead.

“The most important thing is that we get this done in as expeditious a fashion as we can, and that is what we are doing,” he said. Britain plans to evacuate 1000 people per day and accept 20,000 refugees.

So far, 306 Britons and 2052 Afghans have managed to escape safely. The Pentagon said it was talking to the Taliban about guaranteeing access.

On Tuesday evening, the Royal Australian Air Force published photographs of what it said were the first evacuees from Kabul. On board the C-130J Hercules were “all available and willing Australian citizens and visa holders at the airport”.

The Taliban had promised that private media could continue to operate in Afghanistan, with the caveat that news organisations must not offend national interests and comply with Islamic law. It said women journalists would need to wait and see whether they would be permitted to continue in their jobs.

The United States, European Union and 19 other countries, including Australia, issued a joint statement calling on the Taliban to guarantee the protection of women and girls.

“We are deeply worried about Afghan women and girls, their rights to education, work and freedom of movement,” the 20 governments and the EU said.

“We call on those in positions of power and authority across Afghanistan to guarantee their protection.

“We will monitor closely how any future government ensures rights and freedoms that have become an integral part of the life of women and girls in Afghanistan during the last 20 years.”

In Kabul, a senior member of the Taliban, Anas Haqqani, was pictured meeting former president Hamid Karzai and Abdullah Abdullah, Chairman of the High Council for National Reconciliation and a peace envoy in the former government. Karzai was president until 2014 and was succeeded by Ghani.

A spokesman for Karzai said the initial meeting was likely to lead to negotiations with the Taliban’s co-founder Mullah Abdul Ghani Baradar.

Baradar, the Taliban’s top political leader, is tipped to be Afghanistan’s next ruler.

He was given a hero’s welcome on the tarmac as he disembarked a flight from Qatar in Kandahar on Tuesday evening. It was the first time he had set foot on home soil for a decade and was believed to be travelling to Kabul on Wednesday.

The Taliban has promised to run an “inclusive government” but one that is subject to Islamic law.