Rebel Tories could join forces with Labour in a bid to put an end to Boris Johnson’s 10pm Covid curfew, according to reports.

The group, made up of dozens of Conservative MPs, reportedly want to call last orders on the unpopular pub curfew – which has resulted in numerous mass gatherings at kick-out time as revellers spill out onto the streets together.

The Tory backbenchers hope to vote it down on Wednesday and are due to meet today to discuss plans to join forces with Labour in order to do say, according to the Telegraph.

It comes after Chancellor Rishi Sunak yesterday expression of frustration at the measures – giving those the rebel Conservatives fresh hope.

The group have also been boosted after Labour delayed backing the curfew until the opposition has seen the evidence behind it, the paper says.

Labour are not expected to decide until the day of the vote if they will vote to carry on with the 10pm cut-off. 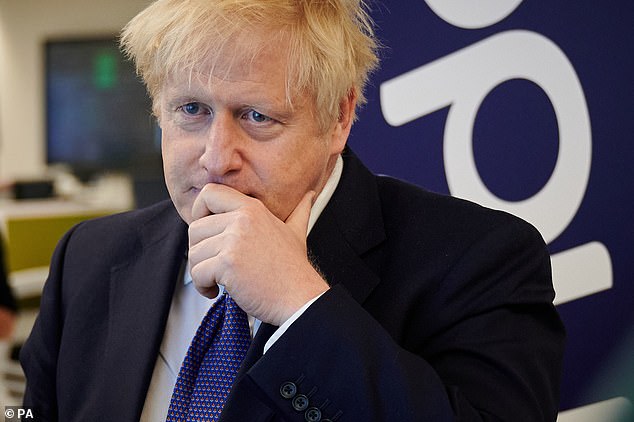 Rebel Tories could join forces with Labour in a bid to put an end to Boris Johnson’s (pictured) 10pm Covid curfew, according to reports 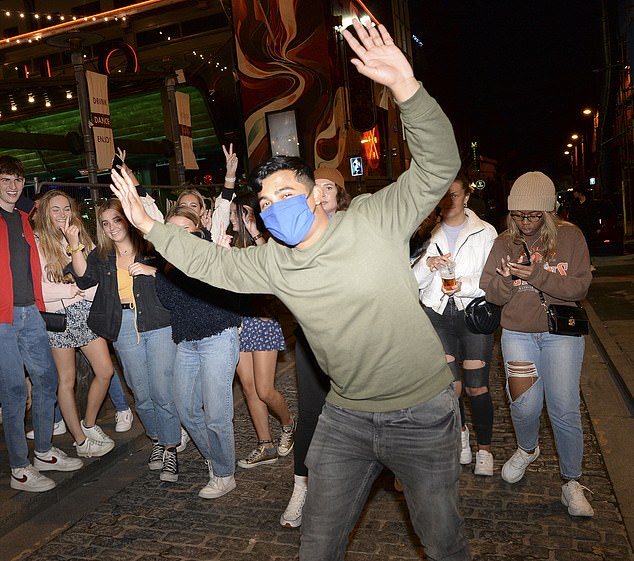 The group, made up of dozens of Conservative MPs, reportedly want to call last orders on the unpopular pub curfew – which has resulted in numerous mass gatherings at kick-out time as revellers spill out onto the streets together (pictured: Revellers leave the pubs in Liverpool)

The anti-curfew Tories are riding high, a week after a Conservative rebellion forcing the government to allow MPs to vote on any future national lockdown.

Ministers are obliged to give MPs a simple yes or no vote on new restrictions weeks after they are introduced,

One told the Telegraph: ‘My sense is that a material number of MPs might vote against the 10pm.’

Another rebel said that if Labour does oppose the curfew there were enough Conservatives who would side with Sir Keir Starmer’s party to defeat the government,

Former Brexit minister Steve Baker, who was a ringleader in the move to win a vote on any lockdown, told the Telegraph: ‘Very few members of Parliament have constituencies which will bear voting against every infringement of liberty.

‘However, there is a growing consensus that neither the 10pm curfew, nor including children in the ‘rule of six’, are well evidenced.

‘I expect quite a few members of Parliament to take issue on those two points.’

Talk of the rebellion comes after Rishi Sunak and Boris Johnson put on a united front yesterday after the Chancellor branded the 10pm pubs curfew ‘frustrating’ and insisted he had ‘no regrets’ about the Eat Out to Help Out scheme.

The two politicians were pictured together visiting an energy firm after Mr Sunak mounted a staunch defence of his subsidies on dining out – despite the PM admitting they might have contributed to the sharp rise in coronavirus cases.

In an interview ahead of his keynote speech to Tory conference, Mr Sunak said the scheme had propped up two million jobs. 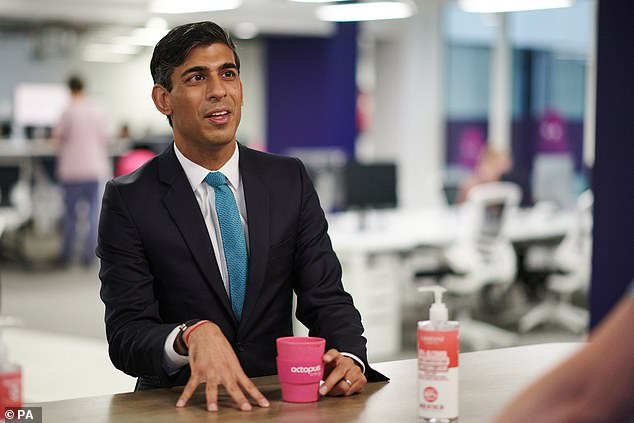 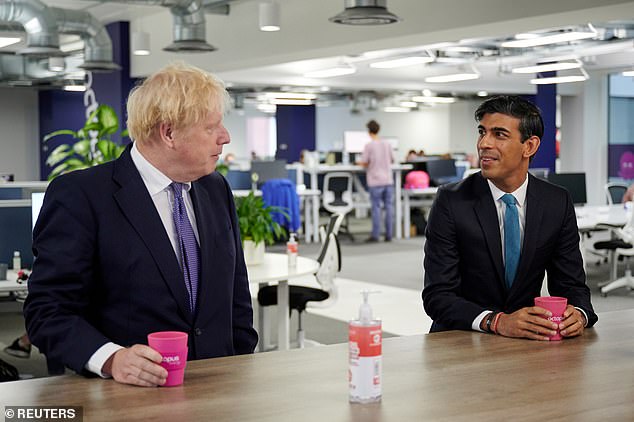 The intervention came after Mr Johnson came under fierce questioning over his handling of the crisis, with criticism of chaotic local lockdowns and shambolic testing. He admitted yesterday that he had dropped his ‘buoyant’ style during the pandemic because it was ‘inappropriate’.

By contrast, Mr Sunak has been praised for his tone talking about the impact of the disease, and the speed with which complicated bailouts including furlough were implemented.

Mr Johnson tried to bridge the apparent gap between their messages yesterday by saying that he wanted the public to be ‘fearless but use common sense’.

Mr Sunak was dubbed Dishi Rishi after unveiling his August scheme of subsidised meals out to help a pub and restaurant sector badly impacted by the coronavirus pandemic.

Treasury figures show more than 100million meals were eaten under the scheme, which gave diners a 50 per cent state-backed discount, up to a maximum of £10, on meals every Monday to Wednesday during August.

Mr Johnson told BBC One’s Andrew Marr Show yesterday that the Treasury incentive ‘may have helped to spread the virus’.

But in his interview Mr Sunak said the success of the initiative had helped prop-up two million jobs and that he had no regrets about paying for it.

‘No, definitely not,’ Mr Sunak said when asked if he held any regrets.

‘We had an industry that I care deeply about because of employment. It’s over two million people.’

Mr Sunak pointed to the low rate of second-wave Covid infections in the South West, a region he claimed made the most use of the scheme, as evidence that the hospitality drive had not had an adverse health effect.

The non-drinker also expressed sympathy over public anger at the 10pm pub curfew brought in as an attempt to curb infections.

‘Everyone is very frustrated and exhausted and tired about all of this,’ he told the paper.

It comes as it was revealed that parts of the UK – including a number of university cities – could be plunged into local lockdown within days after ‘missed’ Test and Trace data belatedly revealed soaring infection figures – putting the areas over the threshold for a new three-tier alert system. 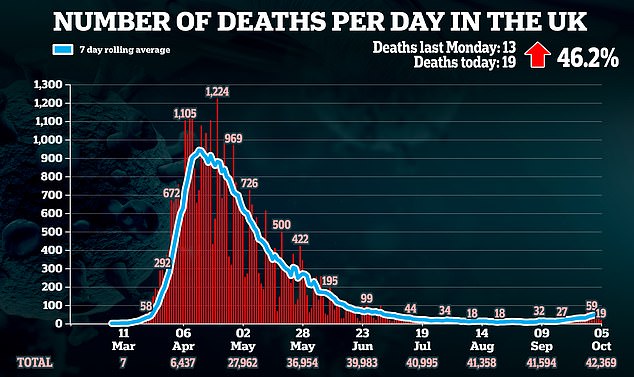 A further 33 deaths were announced today, as the Government looks set to unveil a new system to manage lockdown restrictions nationwide 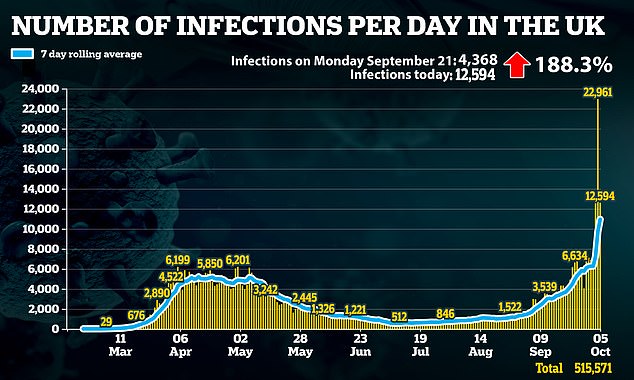 As infections continue to rise, tighter measures than those already impacting on millions could be introduced in some of Britain’s worst-affected areas

Cities including Sheffield, Leeds and Oxford are among a dozen areas which have seen their coronavirus infection figures soar following the ‘computer glitch’, which meant 16,000 cases were missed off Public Health England’s reporting system.

Residents in Nottingham, which has two universities, have reportedly been told to brace for lockdown measures, according to the Telegraph.

The city, which is home to Nottingham University and Nottingham Trent University, was previously not on the Government’s Covid ‘watch list’.

But the updated data reveals the city would have been one of the worst areas in the country last week when compared with the pre-adujsted figures.

The Department for Health insist the new figures do not impact its watch list or alter current restriction in the area, according to the paper.

There were a further 12,594 confirmed cases of coronavirus reported yesterday, bringing the total number of cases in the UK to 515,571, while another 19 people lost their lives.