Trial juries should be cut in numbers to clear crown court backlog, Lord Chief Justice says with some trials listed for 2023

Reducing the size of trial juries could help clear the backlog of crown court cases, the Lord Chief Justice has suggested.

Lord Burnett of Maldon, the most senior judge in England and Wales, told the Daily Telegraph newspaper that the Covid-19 pandemic had led to ‘deeply damaging’ delays in the justice system.

He said the coronavirus crisis had exacerbated a backlog of crown court cases caused by years of budget cuts.

In March last year, the crown court backlog stood at around 40,000, but was hit by court closures and the delays triggered by the pandemic. 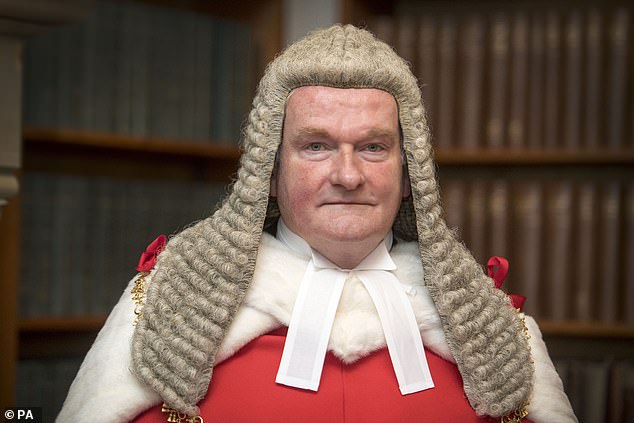 Lord Burnett of Maldon, the most senior judge in England and Wales, told the Daily Telegraph newspaper that the Covid-19 pandemic had led to ‘deeply damaging’ delays in the justice system

Ministry of Justice figures revealed that towards the end of April this year, more than 57,000 crown court cases were outstanding – with some trials listed for 2023.

Lord Burnett told the Daily Telegraph: ‘Put yourself in the position of a complainant or a defendant waiting years for trial. You don’t know what’s going on for all that time. It’s just deeply damaging to people.’

The newspaper said the senior judge suggested reducing the size of juries as a solution, with him arguing that ‘an opportunity was missed to introduce a temporary reduction in jury size’ at the start of the pandemic.

Lord Burnett asked: ‘Do some of the low-grade cases that go to the crown court really need as many as 12 [jurors]?’

The Telegraph also reported the Lord Chief Justice expressed frustration that some offences ‘do seem to take a long time to investigate now’ and concern over the time taken for sexual assault and rape cases to reach court.

His comments come after Labour called for the size of juries to be cut from 12 people to seven in January this year to help clear the criminal case backlog.

So-called ‘wartime juries’ were used during the Second World War when numbers were cut except for murder and treason trials, and were suggested to reduce the space needed to hold socially-distanced hearings.

This came after warnings from justice watchdogs, who said the ‘unprecedented and very serious’ court case backlog posed the greatest threat to the criminal justice system in England and Wales.