A record number of extremists have been sent on a government deradicalisation scheme, driven by surging numbers of far-Right sympathisers.

The Channel project, which attempts to divert extremists away from terrorism, took on 697 new cases in the year to the end of March.

It is the highest figure since Channel was set up five years ago, and up from 556 in the previous 12 months.

The Home Office said 302 cases were over concerns regarding far-Right radicalisation. 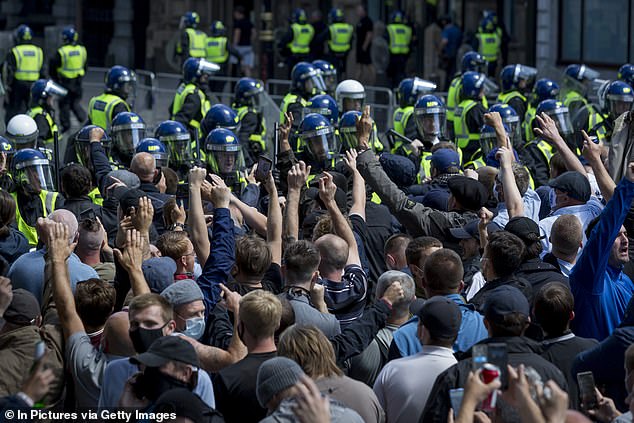 Pictured: A group of far-Right supporters face off with police in London on June 13. A record number of extremists have been sent on a government deradicalisation scheme

Fears over Islamist extremists led to 260 referrals. The remainder were categorised as ‘other’ or as ‘mixed, unstable or unclear ideologies’.

Police, schools, colleges and other groups made 6,287 referrals to the broader anti-terror programme known as Prevent – a 10 per cent increase on the previous year’s record low. Of those, 1,487 were Islamist and 1,387 were Right-wing.

However, a larger number of far-Right cases were adopted by the Channel project.

Sam Armstrong, of counter-terror think-tank the Henry Jackson Society, said it was difficult to explain the discrepancy. He added: ‘Islamists commit 95 per cent of terrorist casualties in Europe.

‘It is very hard to explain why the numbers of Islamists referred to Channel are so low, given the dangers they pose.’

The Channel programme provides support including education and mental health workers in an attempt to divert extremists away from terrorism. It also provides ‘ideological mentoring’.