“It is more than 150,000 Russian troops massing on the Ukrainian borders and in Crimea. The risk of further escalation is evident,” Borrell said, declining to give a source for the figure. 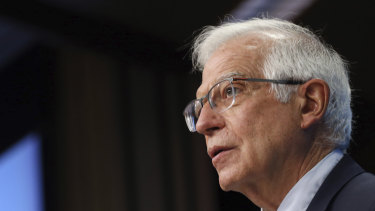 He said no new economic sanctions or expulsions of Russian diplomats were planned for the time being, despite saying that the military build-up on Ukraine’s borders was the largest ever.

In Washington, the Pentagon said the Russian military build-up was larger than that in 2014 and it was not clear that it was for training purposes.

A US official, speaking on the condition of anonymity, said the Russian build-up numbered in the tens of thousands but was not aware of intelligence that pointed to more than 150,000 Russian troops. 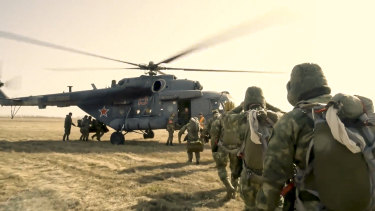 Russian special forces units board a helicopter during an exercise in the Tambov region, the Western Military District in Russia. Credit:AP

Tensions between Moscow and Kiev have been rising amid the military build-up and clashes in eastern Ukraine between the army and pro-Russian separatists.