Sarah Sanders steps down: Trump announces ‘wonderful’ White House press secretary will leave at end of month to return home to her family in Arkansas, as he hails her as a ‘fine woman’ and a ‘warrior’

She will leave at the end of June after two-and-a-half years at the White House, where she clashed with the press, scaled back briefings, appeared in the Mueller report and carried forward the president’s combative posture with the media.

‘After 3 1/2 years, our wonderful Sarah Huckabee Sanders will be leaving the White House at the end of the month and going home to the Great State of Arkansas,’ Trump tweeted.

‘She is a very special person with extraordinary talents, who has done an incredible job! I hope she decides to run for Governor of Arkansas – she would be fantastic. Sarah, thank you for a job well done!’

Trump hailed her at the White House minutes after the departure announcement.

He called her ‘a person, a friend, a woman, a great, great magnificent person actually, named Sarah Huckabee Sanders. And she’s very popular. She’s very popular,’ ending the tribute by saying: ‘She is a warrior.’

‘She’s done an incredible job. We’ve been through a lot together. She’s tough and she’s good,’ Trump gushed.

‘I want to thank you for an outstanding job,’ he said, kissing her check. 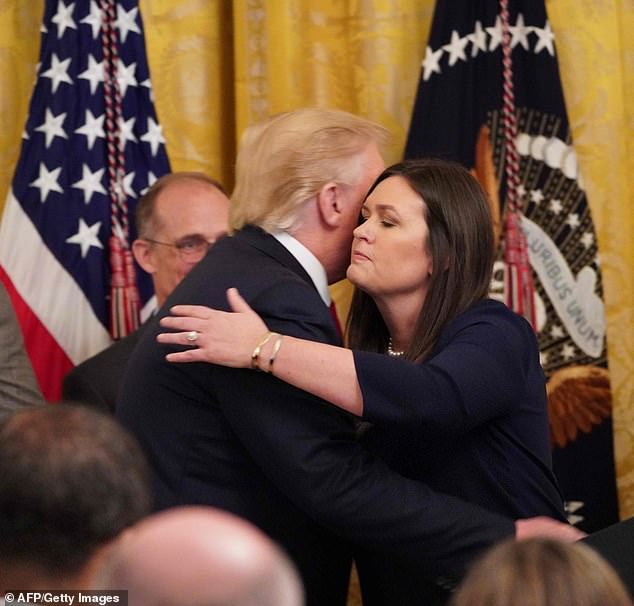 Hailed by the chief: Trump brought Sarah Sanders on stage at a White House reception to praise her publicly after using Twitter to announce that she was leaving 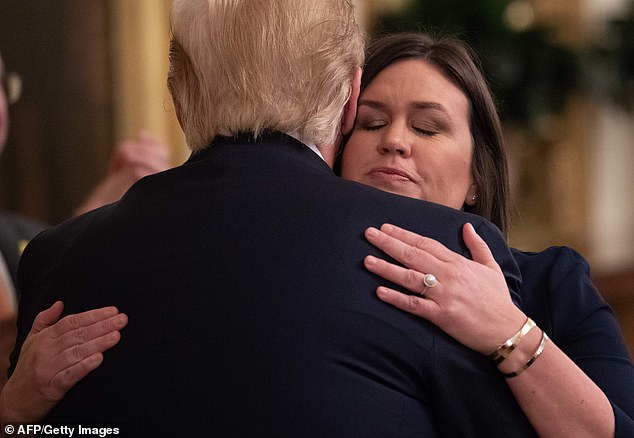 Hug-off: Trump praised Sanders for her work and said: ‘She’s done an incredible job. We’ve been through a lot together. She’s tough and she’s good.’

Trump appeared alongside her at the White House podium and hailed her family. Sanders has three children – daughter Scarlett and sons William and George – with her husband Bryan.

She sometimes posted photographs of them together even while holding down one of the most difficult communications jobs in the country, and was last seen at the press room podium when she brought them to the White House for Take Our Daughters and Sons to Work Day in April.

Trump pointed out her ‘great family, her husband, who’s a fantastic guy, and her great family. And I don’t know… if we can get her to run for the governor of Arkansas, I think she’ll do very well,’ Trump said.

Republican Asa Huchinson is the governor of Arkansas. The seat isn’t open until 2022, and Lt. Gov. Tim Griffin is expected to seek the position.

Sanders, one of several women to hold the press secretary position over the years, told a crowd at the White House: ‘I’ll try not to get emotional because I know crying can make us look weak sometimes, right? This has been the honor of a lifetime, the opportunity of a lifetime. I couldn’t be prouder to have had the opportunity to serve my country, and particularly for this president.’

She said of Trump: ‘He has accomplished so much in these two and a half years and it’s truly been something I will treasure forever. It’s one of the greatest jobs I could ever have. I’ve loved every minute. Even the hard minutes. I’ve loved it. I love the president. I love the team that I’ve had the opportunity to work for,’ she said.

‘And it’s truly the most special experience – the only one I can think of that might top it just a little bit is the fact that I’m a mom. I have three amazing kids,’ she said to applause.

‘And I’m going to spend a little more time with them. And in the meantime I’m going to continue to be one of the most outspoken and loyal supporters of the president and his agenda, and I know he’s going to have an incredible six more years and get a lot more done, like what we’re here to celebrate today.’

‘And I don’t want to take away from that, so I certainly want to get back to the tremendous thing that the people behind me have done. And thank you so much, Mr. President. It’s truly an honor.’

Trump, who had his arm around her as he introduced Sanders, kissed the side of her head before she spoke.

‘She’s a warrior,’ he said of Sanders. ‘You guys know what warriors are, right? Huh? You’re warriors. We’re all warriors. We have no choice. We have to be warriors in this world. But she is a warrior. Thank you, Sarah, very much.’ 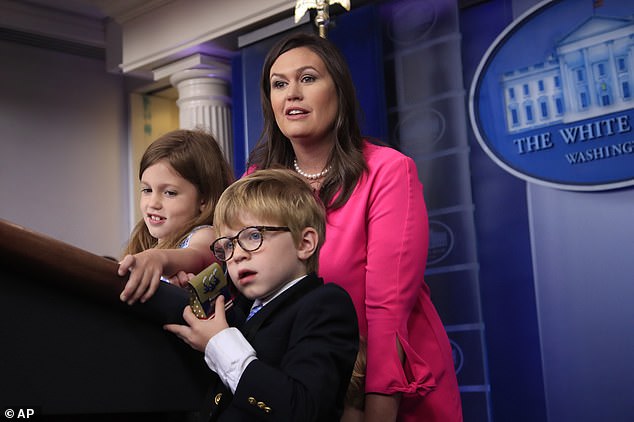 With my family: Sarah Sanders said she would be spending more time with her three children — daughter Scarlett and sons William and George – whom she had taken to the White House for Take Our Daughters and Sons to Work Day in April – her last appearance at the podium 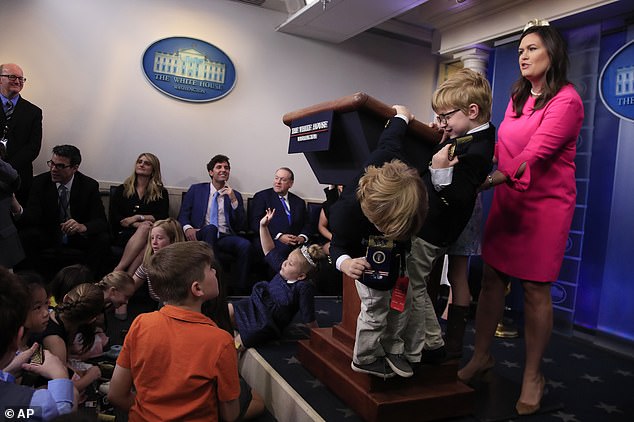 News that Sanders was stepping down from her post came Thursday during another typically tumultuous day in the White House, where the president was on defense after giving extraordinary access to ABC’s George Stephanopoulos in an interview.

The president had said he would not call the FBI if offered opposition research from a foreign source.

Sanders had not given a formal briefing in three months, although she has lately spoken to reporters on the South Lawn of the White House following TV interviews.

Special counsel Robert Mueller’s revealed that Sanders admitted to investigators that she had made an unfounded claim that ‘countless’ FBI agents had reached out to express support for Trump’s decision to fire FBI Director James Comey in May 2017.

Sanders traveled with the president during his trip to Great Britain, Ireland, and France this month, securing a capstone to a tenure that made her a prominent White House spokeswoman with frequent access to the president.

The president essentially gave up on hiring a communications director to oversee strategy, improvising his way through message strategy on issues ranging from foreign policy to the Mueller probe – which both Trump, and Sanders, cast as an unfair witch hunt.

Sanders is a political operative who advised Trump during the campaign and previously worked for her famous father, former Arkansas Gov. Mike Huckabee, who has his own show on a Christian network and recently signed another consulting agreement with Fox News.

Dramatic announcement: Trump used his favorite medium of twitter to announce the departure of his longest-serving press secretary 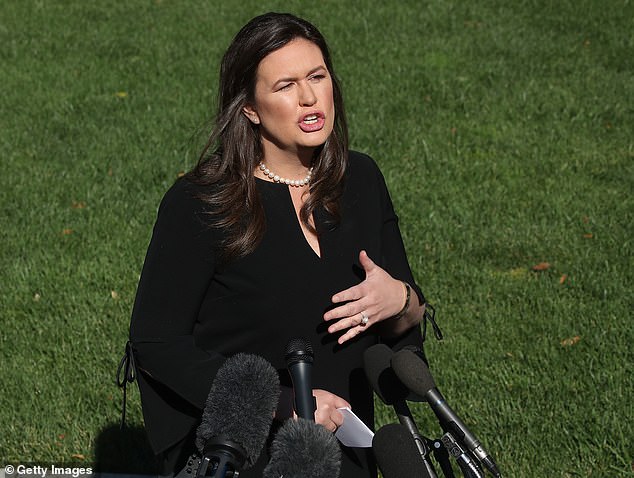 On her way out: Sarah Sanders had not given a formal briefing in three months, although she has lately spoken to reporters on the South Lawn of the White House following TV interviews. 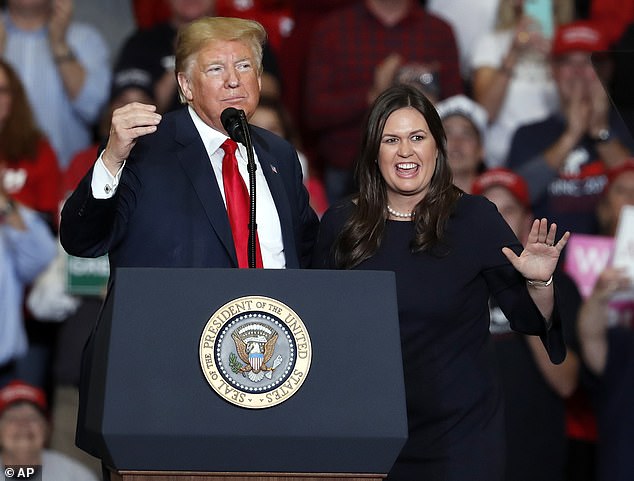 Endorsement: Trump tweeted: ‘She is a very special person with extraordinary talents, who has done an incredible job! I hope she decides to run for Governor of Arkansas – she would be fantastic.’ Her father Mike Huckabee was governor of Arkansas and used it to launch two runs for president

Sanders has given a series of interviews to Fox, allowing her to communicate with Trump supporters even as she became a favorite target of Democrats and the left.

The news came on a day that another top White House messenger, counselor to the president Kellyanne Conway, suffered an extraordinary dressing-down from the Office of Special Counsel.

Sanders sometimes represented the White House at public events, as she did at the 2018 White House Correspondents dinner, where she suffered through a series of barbs by comedian Michelle Wolf.

Sanders remained through the event, looking upset, but did not return the next year.

In fact, Trump announced on Twitter that his entire staff would not be going – the latest in a series of indications of the gulf that had developed between the White House and the press.

Nevertheless, even after Sanders virtually ended combative formal briefings and the president started delivering his own spin during frequent South Lawn and Oval Office events, she sometimes advocated on behalf of greater access for reporters covering the beat.

She was credited with helping line up Ivanka Trump to attend this year’s glitzy Gridiron dinner when the president pulled out at the last minute returning from overseas travel to Asia.

Alec Baldwin, who plays Trump on Saturday Night Live, revealed how much Sanders became a stand-in for Trump’s strongest opponents, branding her a ‘mouthpiece for fascism’ in a recent tweet.

Sanders had long been criticized for taking up Trump’s attacks on the media and investigators from the White House podium, but came in for particular scrutiny after the release of the Mueller report.

At issue was her statement to the press – and the nation – that Trump had fired former FBI Director James Comey after hearing from ‘countless members of the FBI’ who contacted her to say they had lost confidence in him.

The issue mattered because Mueller investigated the firing as a potential obstruction of justice offense to impact the Russia probe. Firing Comey for good cause would be a legitimate purpose.

But when she sat down with federal prosecutors under oath, Sanders revealed there was no basis for her claim.

According to the Mueller report, she told investigators it was a ‘slip of the tongue’ that was not based on anything.

She did not try to support her false claim that countless agents had contacted her about Comey.

She defended herself on Sean Hannity’s program on Fox after the release of the report. ‘I acknowledge that I had a slip of the tongue when I used the word ‘countless’ but it’s not untrue … that a number of both current and former FBI agents agreed with the president,’ she said.

Her move follows the departure of senior communications official Bill Shine in February. Shine had come to the White House from an executive position at Fox News, but struggled to mold Trump’s communication style to the polished and less improvised standards of network news.

Trump’s first press secretary Sean Spicer, had his own problems with the press, after angry statements during his first day on the job about the size of Trump’s inaugural crowd. Spicer later called the statement a mistake.

Former communications director Anthony Scaramucci was ousted after just 11 days in his high-profile position. One of his most lasting achievements was elevating Sanders to her job.