Washington: US President Donald Trump's pick for national intelligence director has been mayor of a small Texas city, a federal prosecutor and a member of Congress.

But questions were already emerging on Monday about whether those qualifications are adequate for the position as the nation confronts threats that include foreign election interference, North Korea's nuclear ambitions and the risk of war with Iran. 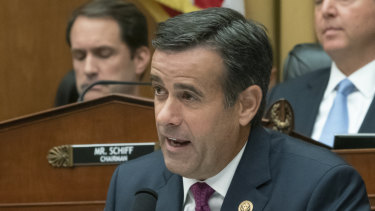 Representative John Ratcliffe's dearth of relevant experience – a departure from the decades of intelligence and foreign policy bona fides of past position holders – may especially matter at a time when current and former government officials expect Russia to interfere in the 2020 presidential election just as it did in unprecedented fashion when Trump first ran.

"Ratcliffe comes to the job with the least national security experience and the most partisan political experience of any previous director of national intelligence," said Mike Morell, a former acting CIA director who now hosts the Intelligence Matters podcast.

The director of national intelligence has oversight of the nation's 17 intelligence agencies. If confirmed, Ratcliffe would be the principal intelligence adviser to Trump, who has appeared determined to surround himself with vocal protectors and defenders even in national security positions that haven't historically been perceived as overtly partisan.

It is unclear, for instance, what experience he will bring in helping thwart foreign government efforts to interfere in American politics. Also unknown is whether scepticism he has voiced in Congress about special counsel Robert Mueller's Russia investigation into ties between Russia and the Trump campaign will affect his response to any foreign influence or cyberattacks on campaigns.

Ratcliffe, who was among the most aggressive Republican questioners of Mueller at public hearings last week, would replace outgoing director Dan Coats at a time of broader reshuffling within the national security leadership structure.

The selection comes two months after Trump empowered another ally, Attorney General William Barr, to declassify intelligence collected by other agencies, including the CIA, as part of the Russia investigation.

Ratcliffe has made clear his scepticism of that investigation and his belief that Trump was treated improperly by investigators, saying in a talk show appearance Sunday that it was time to move on from discussion of impeachment.

"It's a moment when Donald Trump can deepen his personal stranglehold over the intelligence function and knock out any voices of dissent to his particular world view," said Democratic Representative Jamie Raskin of Maryland. "That's a scary thing for the country."

Coats, who will step down next month, was publicly steadfast about his conviction that Russia had interfered in the election even in the face of the president's ambivalence. He appeared to scoff when told in an interview last year that Trump had invited Putin to Washington.

In his resignation letter, he cited as an accomplishment the appointment of an election security executive "to support the whole-of-government effort to address threats against our election."

Tensions with Trump notwithstanding, Coats did bring to the job decades of Washington experience, including lengthy stints as an Indiana congressman and US ambassador to Germany. His predecessor in the Obama administration, James Clapper, spent decades in the military and in intelligence, including as director of the Defence Intelligence Agency.

Ratcliffe does not have equivalent credentials, though his supporters are likely to point to his experience as a terrorism prosecutor and federal prosecutor, as well as his recent membership on the House intelligence committee, which he joined in January.

First elected to Congress in 2014, Ratcliffe's experience as top federal prosecutor in east Texas gave him instant clout when Republicans ran the Judiciary panel. He was one of the main questioners when Republicans hauled in Justice Department officials to question them about whether they were biased against Trump in the early days of the FBI's Russia probe.

Representative Devin Nunes, the top Republican on the House's intelligence committee, tweeted that Ratcliffe "understands the intricacies of the intelligence community as well as civil liberties."

It's unclear whether concerns about his credentials will trip up the confirmation process. Confirmation takes a simple 51-vote majority, under new rules in the Senate, but that leaves slim room for error with Republicans holding a 53-seat majority.

Senator Richard Burr, the top Republican on the Senate intelligence committee, said Monday that he would move swiftly to push the nomination through his Republican- led panel, even though the Senate's top Democrat, Charles Schumer of New York, warned that it would be a big mistake "if Senate Republicans elevate such a partisan player to a position requiring intelligence expertise & non-partisanship."

Senate Majority Leader Mitch McConnell issued a statement Sunday that praised Coats but pointedly noted: "The US intelligence community works best when it is led by professionals who protect its work from political or analytical bias and who deliver unvarnished hard truths to political leaders in both the executive and legislative branches. Very often the news these briefings bring is unpleasant, but it is essential that we be confronted with the facts. Dan Coats was such a leader."

Even before Mueller testified, Trump had his eye on Ratcliffe, who had already established himself as an outspoken defender of the president and raised Trump- backed questions about the conduct of the intelligence community in the Russia probe. But two officials said his aggressive questioning of the former special counsel cemented the president's view that he was the right person for the job.

On Wednesday, he told Mueller that while he accepted that Russia's interference was "sweeping and systematic," he was also concerned about how much intelligence came from an ex-British spy who received Democratic funding to investigate Trump.

He pointedly accused Mueller of departing from the special counsel's own rules by writing "180 pages about decisions that weren't reached, about potential crimes that were charged or decided."

"I think it's fair to say that the political partisanship he brought to the hearing … which came across as undertaken on behalf of the president to denigrate the work of the special counsel raises considerable questions about whether he is fit to serve as the DNI," said David Laufman, a former Justice Department national security official.