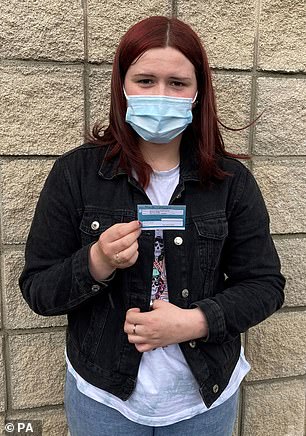 Schools are already scheduling Covid vaccinations for 12- to 15-year-olds despite them not having been approved for the age group yet. Pictured: Meabh Magee from Glengormley, County Antrim, received her first dose of the Covid vaccine at the SSE Arena in Belfast yesterday

Schools are already scheduling Covid vaccinations for 12- to 15-year-olds despite them not having been approved for the age group yet.

No10’s top scientists expanded the vaccination drive to include 1.4million 16- and 17-year-olds on Wednesday, in a dramatic U-turn from two weeks ago. They also laid the groundwork for over-12s to be vaccinated later in the year.

And now the oldest teenagers are being offered their first dose at walk-in centres in Northern Ireland, while some GPs in England are also already inviting them for jabs.

England will offer Covid vaccines to the age group at walk-ins from next week, when Scotland and Wales are also set to invite the oldest teenagers for their first dose.

John Ferneley College in Leicestershire jumped the gun on vaccinating under-16s by telling parents of children in years eight to eleven that pupils would be vaccinated at the school.

In a letter, the school said first doses would be dished in mid-September and the second in early January 2022.

It comes as a  university announced it is offering cash prizes to students who can prove they have been fully vaccinated against Covid in an effort to drive take-up of the jabs.

All students at Sussex University are being entered into a draw, with 10 winners receiving £5,000 if they can prove they are double-jabbed or exempt.

Professor Adam Tickell, the university’s vice-chancellor, denied the move amounted to ‘bribing’ students to get vaccinated.

The prize draw will take place at the end of November to allow students time to get vaccinated. 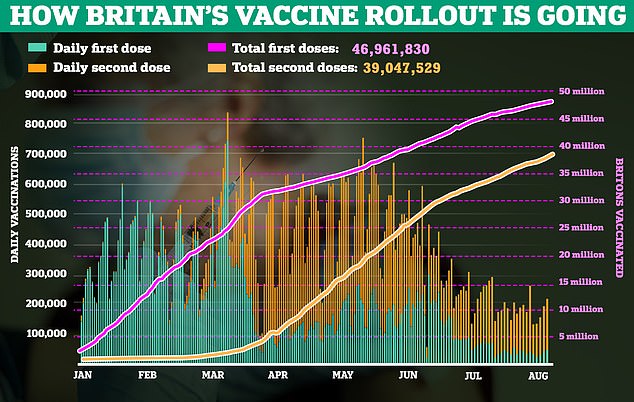 One parent whose two children are at John Ferneley College told the Daily Telegraph: ‘I was just shocked that they were even planning dates. It just makes you think this is definitely planned that this is going to happen at some point in the next few months.

‘My main worry is will my children still be able to go to school if they don’t have it?’

Molly Kingsley, co-founder of the parent campaign group UsForThem, said NHS trusts and schools are ‘creating a presumption as to the JCVI decision’.

She added: ‘This is wrong for many reasons but not least because it shows they are creating pressure towards a course of action without regard to the medical benefits or risks to the children supposedly in their care.’

Meanwhile, universities are offering out incentives to students to book their first jabs.

Professor Tickell told BBC Radio 4’s Today programme: ‘We’re going to automatically enter every student in, and unless they have said they want to opt out, after we’ve given them the opportunity to have vaccines — this will be about 12 weeks after the announcement — we’ll just randomly choose 10 names.

‘If they can prove they’ve been double vaccinated, or indeed if they are medically exempt, we’ll make them the award.’

Nearly 170 neighbourhoods across England have still not fully vaccinated two-thirds of over-50s against Covid, MailOnline can reveal.

Scientists warned our analysis — based on official statistics of the country’s 7,000 districts — shows there are huge pockets of the population still vulnerable to the virus.

Ministers aimed to give all in the age group two jabs in order to protect them from the rampant spread of the Delta variant ahead of restrictions being eased back on July 19 ‘Freedom Day’.

But NHS England figures, which go up until August 1, show 29 neighbourhoods across the nation have not yet reached more than 60 per cent of people aged 50 and over.

Some 169 have only reached two thirds of the most vulnerable age groups, who were prioritised for the vaccine and have been eligible since March 17.

In theory, all could have been fully-jabbed now, given the 12-week spacing gap between doses, which was later shortened to eight weeks to help combat the rise of the now dominant mutant strain.

Overall, 2.5million over-50s (11 per cent) have not yet got their second jab and 2million haven’t had their first (nine per cent).

Harehills South in Leeds has reached the fewest over-50s, with just 813 of the 1,562 living in the area receiving their second dose — 52 per cent of the population.

For comparison, 22 areas have double-jabbed more than 96 per cent of their over-50s, with Morpeth South and West in Northumberland leading the way (96.6 per cent).

Experts warned vulnerable people who have not yet been vaccinated are ‘just as much risk of severe disease and death as at any time during the pandemic’. Even though one jab offers some protection against severe illness, two doses are much stronger.

Professor Paul Hunter, an infectious disease expert at the University of East Anglia, told MailOnline NHS hospitals in the areas lagging behind could still face huge pressures this winter. Most experts believe there will be another wave of Covid in the colder months.

He added: ‘We’re not bribing them. What we’re doing is we’re just giving an incentive.’

Professor Tickell said the university hoped to give students an experience ‘as close as possible to normal’ when they return after the summer, with teaching taking place in person rather than online.

He said: ‘We know that many students will have already had their vaccines or are planning to.

‘If we can boost those numbers even slightly through a simple intervention like this, then of course we are going to do so.

‘Whilst these are significant prizes for our students, the cost to the university is small compared with the human, social and financial cost if students were to experience the kind of disruption we faced last year.’

Universities Minister Michelle Donelan said: ‘Vaccines are the surest way to put Covid behind us and for students to reclaim the freedoms that enrich university life, and I encourage all eligible students to take up the offer of both vaccine doses.

‘The department is encouraging universities to look at creative ways to boost uptake and to discuss the possibility of pop-up centres with local health partners — making it quick and easy for students to grab a jab.’

The first healthy 16 and 17-year-olds received their Covid vaccines yesterday.

Elliot Aston, 16, from County Down in Northern Ireland, today became one of the first in his age group to be inoculated against the virus.

The smiling teenager, pictured outside the jabbing centre in Belfast clutching his vaccination card, said: ‘It’s good that they’re finally offering it to us because we are probably the ones that are out and about the most so I think it’s about time.’

NHS England said some GPs had already started administering Covid vaccines to 16 and 17-year-olds, but that the oldest teenagers should wait to be contacted by their local clinic to arrange an appointment.

A letter from NHS bosses sent to GPs yesterday said they could now start offering the Covid vaccine to people in the age group.

Walk-in services at regional and local vaccination centres in England are expected to open to the age group from next week.

Health Boards in Wales are already sending out vaccine invites to 16 and 17-year-olds, officials said.

And in Scotland those in the age group are being told to register their interest via an online portal and will then be sent an appointment time by email or text. In Shetland, Orkney and the Western Isles they are being told to wait to be contacted by their local health board.

Dr Nikki Kanani, NHS medical director for primary care, said the health service is working to get 16 and 17-year-olds vaccinated ‘as swiftly as possible’.

‘I am pleased to say that one million children and young people will now be able to get the vaccine protecting themselves, their family and their friends,’ she said.

‘The Covid vaccine is safe and effective and I urge anyone eligible of any age to come forward and take up the offer.’ 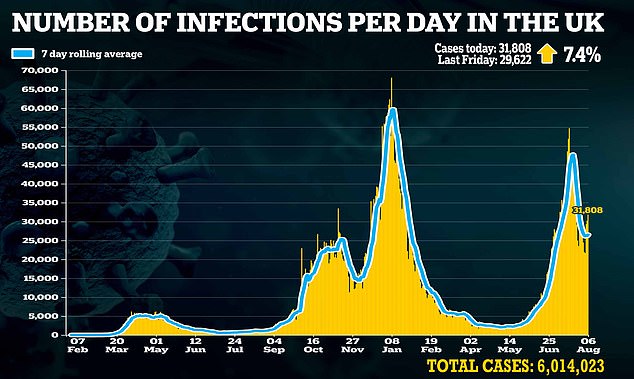 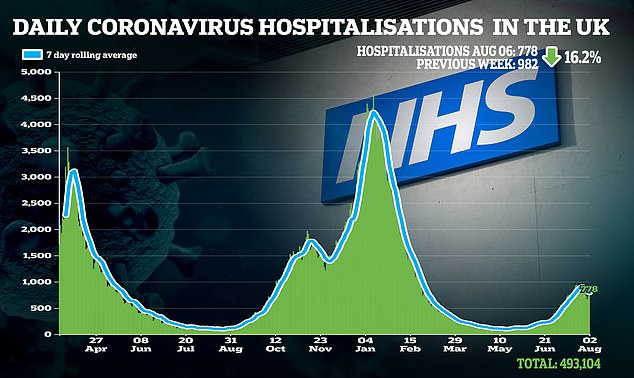 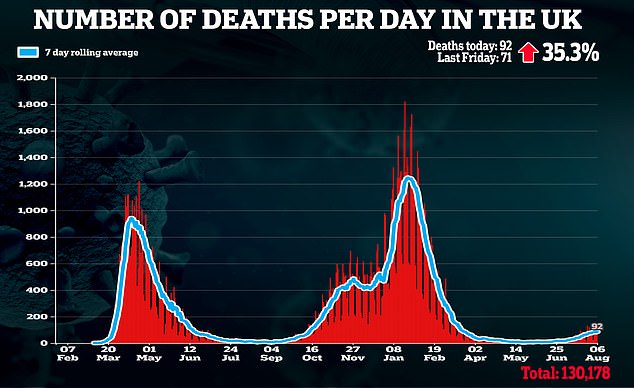 Health Secretary Sajid Javid said: ‘The NHS has worked hard to put the JCVI’s independent and expert advice into action to roll out this new stage of our ground-breaking vaccination programme.

‘Now all 16 and 17-year-olds can join the rest of the country and get their jab to protect themselves and their loved ones.’

Sixteen and 17-year-olds are being offered the Pfizer vaccine because it is the only one approved by Britain’s medical regulator for the age group.

There are currently no concrete plans to offer them second doses, with the JCVI wanting to buy more time to understand the safety risks.

Some children have already been inoculated against the virus because those living with vulnerable adults have been able to get jabbed for weeks.

Pfizer’s vaccine has been linked to a rare side effect called myocarditis — inflammation of the heart muscle. Data from the US, which has been giving the jab to children for months, shows the complication affects one in 100,000 teenage boys after the first dose, but this rises to about one in 15,000 after the second dose.