A shipping company has agreed to help seven Indonesian seafarers get home from a vessel docked in Port Melbourne after they complained of being bullied and harassed by senior officers on the vessel.

Seven seafarers from the MV Sincere signed a letter on Friday to Uniteam Marine, which manages the vessel, refusing to sail to its next port of Eden, on the NSW south coast, unless they receive a written guarantee they will then be repatriated. 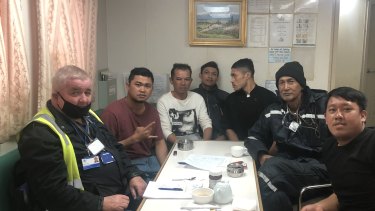 Crew members from the MV Sincere, with ITWF official Matt Purcell (left), who are desperate to get off the vessel.

One man, Fanny Arhandika Trisna, said he had been at sea for 10 years and never faced the level of overwork and abuse he had been subject to on the Sincere. “First time with a captain [that treats us] like animals, [with] no respect,” Mr Arhandika Trisna said.

In a statement, a spokesman for the Cyprus-headquartered Uniteam said the company was working closely with the international seafarers’ union to investigate the workers’ complaints of officer misconduct and crew mistreatment.

“The safety and welfare of our people is always our foremost priority, and we take these
allegations very seriously,” the spokesman said. “We are committed to ensuring that our crew members work in a safe environment.”

“At the request of the crew, Uniteam Marine is arranging for the crew who wish to sign-off to
disembark and return home whilst investigations are ongoing. We will cover all costs associated with repatriating the crew.”

The assistant Australian coordinator of the International Transport Workers Federation, Matt Purcell, said in his 25 years in the industry he had not seen crew members so unhappy with their conditions just a month into their typically 11-month long contracts.

“That’s a pretty good indication of the abuse they’ve received,” said Mr Purcell, who has been on board the ship several times to speak with the crew since it arrived last Tuesday.

He also recounted how a 19-year-old crew member had been shouted at and intimidated by the captain. “It’s really not good behaviour when he’s only 19 this kid, first time at sea,” Mr Purcell said.

Without the seven crew, Mr Purcell said, the ship would be below the minimum threshold set by its flag state, the Marshall Islands.

That will require the operators to either take on local sailors, which could be done quickly, or from overseas, which could take longer because of travel and coronavirus restrictions.

A spokesman for the Australian Marine Safety Authority said it was aware of the welfare concerns raised by seafarers aboard the Sincere.

“AMSA is working with the crew, the ITF, and the ship owners to investigate and resolve these matters,” he said.

Labour standards in the shipping industry can be difficult to enforce because of the ships’ frequent isolation, complex jurisdictional questions, and multiple layers of companies with different responsibilities.

The coronavirus and international trade disputes, including China’s trade strike on Australian coal, have meant some sailors have been stranded on board their ships for months without seeing land.