A missing 14-year-old autistic boy has spent a night alone in bushland with temperatures dropping to 13 degrees, as authorities grapple with how to allow locals to help in the search amid COVID-19 restrictions.

William Wall left to go for his daily jog on the Warburton Rail Trail at Launching Place, east of Melbourne in the Yarra Ranges, about 6.45am on Tuesday morning.

He told his family he would be gone for 15 minutes but didn't return home.

Late last night, local police took to their Facebook page to tell locals they weren't needed in the search because of the coronavirus.

"In line with coronavirus restrictions, at this stage we do not require any assistance from the public," a post on the Yarra Ranges Police Service Facebook page read.

"We want to say a big thank you however, for the all the offers we have received."

Yarra Ranges Police officer Inspector Jason Goddard said the search was not scaled back overnight, but police had to be 'conscious' of COVID-19 restrictions in asking the public to come out and help.

"We’re living in different times at the moment, we have to be very conscious of … COVID," he told radio station 3AW.

Mr Goddard said more than 60 professional volunteers and officers were deployed for the search, but asked locals to keep their eyes out for the teen while they were out for exercise and to check their properties.

"We really do want the local residents within this area to check their backyards and check their structures," he said.

Local Tom Osberg told the radio station many properties in the areas were holiday homes owned by people in Melbourne who couldn't travel to the area because of coronavirus restrictions.

"My neighbour's on 90 acres, he doesn't live there, he's not allowed to," he told host Neil Mitchell.

He said authorities should allow Melburnians to travel up to check their holiday homes to try to find the boy, and he would risk a fine searching his neighbour's massive property on his behalf.

"Just let people come up for aa couple of hours to check their homes," he said.

The teen's father, Shane Wall, told Nine News on Tuesday night that he had been out searching since late Tuesday morning with William's brothers.

"At the moment, everyone is hoping he is going to be ok. I just want him to get home, it's as simple as that." 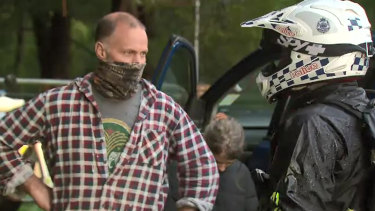 Shane Wall just wants his son home as the search for the missing teen continues.Credit:Nine News

He said his son would normally go for a run or a bike ride early in the morning for half an hour to an hour, but it was "absolutely" out of character for him not to return home.

"It's not normal for him at all … I just want him to reach out to someone if he sees someone.

Acting Sergeant Jordan Kavanagh said police were called about 9.40am.

Since then, they have been alerted to a possible sighting of William near Warburton.

"We have had a possible sighting from a credible witness we believe in the Warburton area so that's given us quite a good place to start," he said.

"He's believed to have been sighted on a trail above Warburton, the [O'Shannassy] Aqueduct Trail, that's the last sighting we have … The witness described an upset male matching the description."

He said that anyone who saw William should approach him calmly and call triple zero or the local police station.

"This is out of character for him. I don't believe it's happened in the past," he said.

"He was said to be going for exercise, a walk, and is just believed to have gotten lost."

The search had expanded to a vast area of the Yarra Ranges, which includes "difficult terrain", he said. 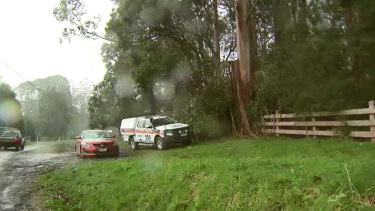 William is described as 177 centimetres tall, with a lean build and mousy brown hair. He has a lazy right eye.

His family said he was last seen wearing a dark hooded jumper, dark-coloured track pants, black runners and had a hydration pack across his chest. He left his mobile phone at home.

The rail trail runs for 47.5 kilometres through the Yarra Valley from Lilydale to Warburton.

Anyone who sees William or with information is urged to contact Mooroolbark Police Station on 9725 9999.