Seattle cosmetic surgeon who performs sex change operations is sued by Washington AG over claims he doctored before and after photos, and threatened patients who posted negative reviews with a $250k fine

A Seattle cosmetic surgeon who performs sex change operations was sued by Washington’s attorney general over claims he doctored before and after procedure photos – and threatened patients who left negative reviews with a $250,000 fine.

Attorney General Bob Ferguson filed the lawsuit on Thursday against Allure Esthetic and its owner, Dr. Javad Sajan, for violation of state and federal laws protecting consumers and patient privacy.

Allure Esthetic is accused of posting fake five-star reviews with edited ‘before and after’ photos of procedures sent by fake email accounts. The reviews were then posted through a VPN to hide the IP address of the sender, Ferguson said.

The year-long investigation conducted by the attorney general’s office interviewed 10 consumers and 40 former employees at Allure Esthetic in response to complaints they received.

Ferguson said, ‘Allure stopped at nothing to keep negative reviews off the internet,’   One former employee called their tactics ‘relentless’, KING5 News reported. 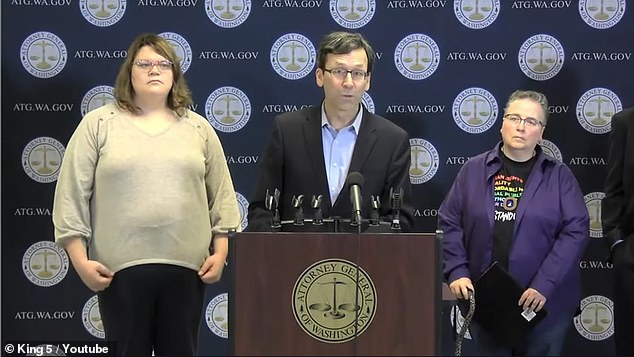 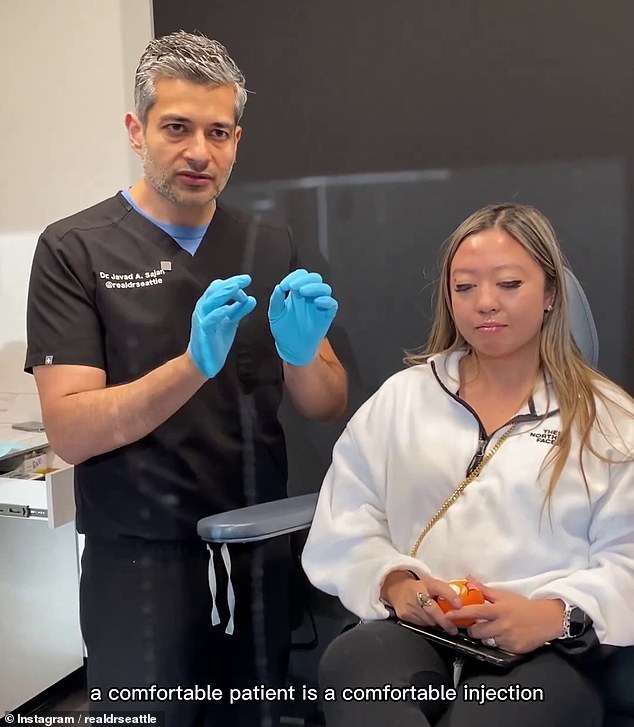 Dr. Javad Sajan MD Allure Esthetic seen here performing a procedure on a female patient that was posted on the clinic’s Instagram account with the comment: ‘A comfortable patient is a comfortable injection’

Betweeen 2017 and 2019 Allure had over 10,000 consumers sign non-disclosure agreements before having a consultation that required patients to contact the business instead of posting a negative review, the news outlet reported.

The lawsuit alleges Allure went as far as to sue anonymous reviewers for defamation, to control what was said publicly about the practice on sites such as Google and Yelp, The Seattle Times reported.

‘This case is about a company and its owner that did everything in its power, often illegally, to prevent individuals, clients from communicating to the public what their experience was in those reviews,’ Ferguson during Thursday’s news conference.

Ferguson said if a patient wrote a negative review about the practice the clinic would bribe and threaten them to remove it even offering the patients cash and services to do so. If a patient did not oblige, Allure would threaten to sue them.

Those who accepted the bribe to take down the negative reviews were forced to sign a second non-disclosure agreement stating that they could face a $250,000 fine if they post any negative reviews in the future, Ferguson alleged the company still requires these agreements.

The lawsuit accuses Allure of posting fake five-star reviews and doctoring before-and-after photos of the procedures. The company was also accused of purchasing fake followers and ‘likes,’ and creating phony profiles to write positive reviews of the company.

It also claimed skincare rebates without the patients consent – using the patients real names and birthdates to register for the rebates – then pocketing the money.

As part of that agreement, the lawsuit claims, patients were required to waive privacy rights so that the company could respond to negative reviews with personal health information.

Ferguson alleged this was in violation of the federal Health Insurance Portability and Accountability Act (HIPAA), an act that prohibits certain entities from disclosing sensitive health information without ‘valid’ authorization. 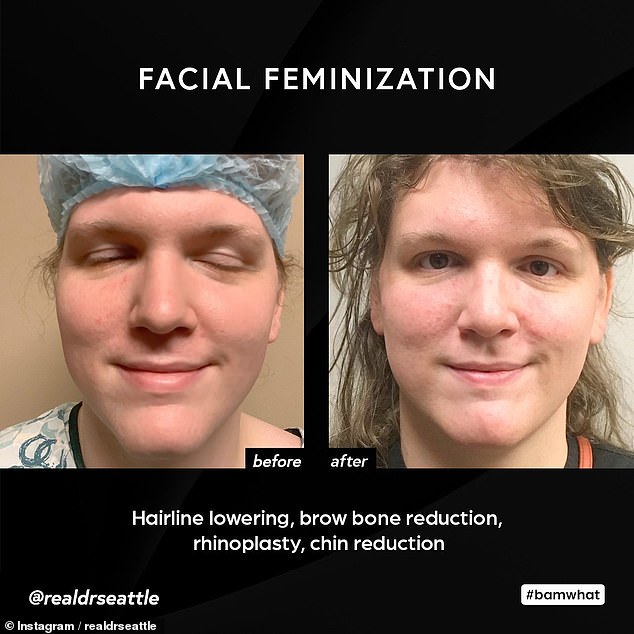 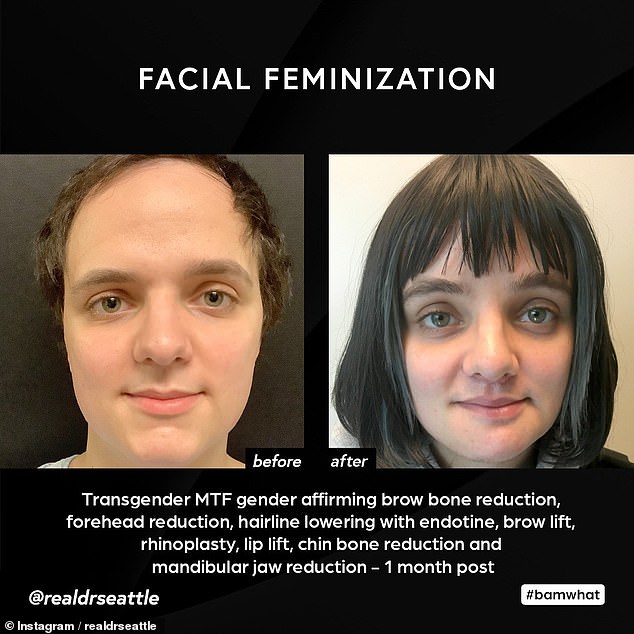 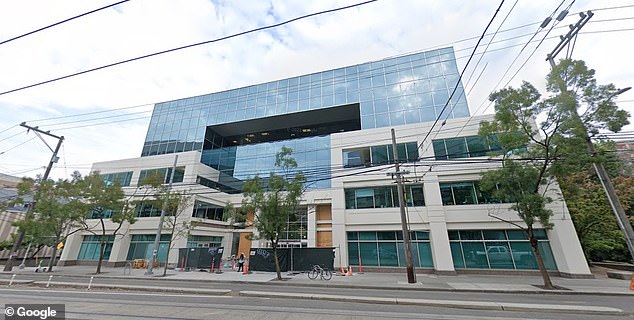 The Seattle office of Allure Esthetics located at 601 Broadway 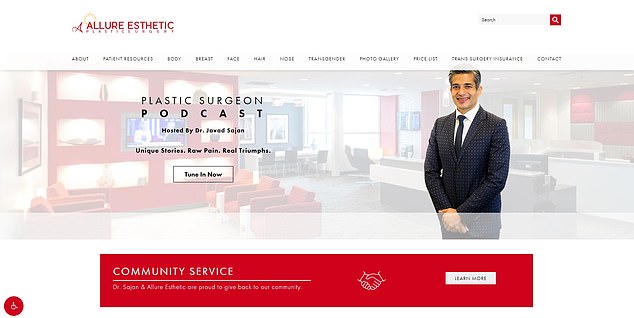 The website of Allure Esthetics that shows is an of Dr. Javad Sajan as it publicizes the plastic surgeon’s podcast that describes the shows as  ‘unique stores, raw pain, real triumphs’

The attorney general said Allure, removed the language in 2019, but the company kept requiring these ‘pre-service’ agreements until March 2022.

During the conference, Ferguson quoted a former employee who gave examples of some of the alterations made.  ‘I was asked to manipulate the after photograph of a patient who had hair plugs to cover a bald spot, and I was asked to photoshop the photos of patients who had tummy tuck procedures and make them look curvier and flatter.’

Ferguson said former web designers who worked for Allure from 2018 to 2021 said they regularly posted fake reviews by creating fictional online personas at the owner’s direction. They were also told to use stock photos and build a persona to create a more realistic profile to post reviews from Allure.

They also alleged that Allure also used a virtual private network or VPN to conceal the IP addresses of reviews. Ferguson called it an ‘elaborate system’ they had in place, so they could not be traced back to the company or be flagged by review sites as false.

Ferguson has asked the court to stop Allure from continuing what he calls ‘illegal practices for violations of consumer protection and patient privacy laws.

He is seeking financial penalties of $7,500 per violation, and that patients get paid restitution for its $100 pre-consultation fee and cash rebates.

Allure also does business under the names Seattle Plastic Surgery, Alderwood Surgical Center, Gallery of Cosmetic Surgery, Nasal Sinus Center and Northwest Face and Body, according to the lawsuit.

The practice that offers surgical and non-surgical treatments, including botox and gender-affirming care, has offices in Seattle, Lynnwood and Kirkland areas.

On Allure’s website Dr. Sajan is featured prominently in a photo that also shows a seal that they were awarded 10 best plastic surgeons in a patient satisfaction survey  two years in a row-  2020-2021 – by the American Institute of Plastic Surgeons.

When DailyMal.com called the offices of Dr. Sajan they were told by his service that the offices were closed until Tuesday.