Seiko Hashimoto, the Japanese cabinet minister and seven-time Olympian, has been appointed as the new chief of the Tokyo Olympics after controversy over sexist comments engulfed the former boss, Yoshiro Mori, just months out from the start of the Games.

The appointment of the 56-year-old woman is seen as a circuit breaker in an increasingly tense political environment that saw years of male-dominated administration culminated in widespread outrage over Mori’s claims that women talk too much and “have a strong sense of rivalry”. 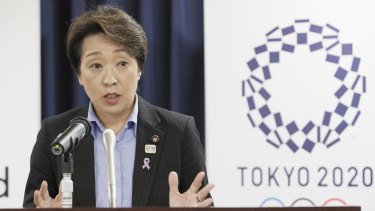 Hashimoto is one of only two women serving in Prime Minister Yoshihide Suga’s 21-member cabinet. The former winter speed skater and summer track cyclist has been Olympics Minister since 2019 and also holds women’s empowerment and gender equality portfolios. In 2000, she set a precedent by becoming the first MP to receive maternity leave after giving birth to a daughter.

“I submitted my resignation as Olympics minister to the Prime Minister as I was chosen as candidate for Tokyo Olympics committee chief,” Hashimoto told reporters after a meeting with Prime Minister Yoshihide Suga.

She added that Suga had encouraged her to make the Games successful but declined to say anything further until after a Tokyo 2020 executive board meeting later in the day, when an official announcement on the post was likely to be made, Reuters reported.

Her resume was a decisive factor in her appointment after the Olympics committee said the key criteria for the new boss would include a “profound knowledge” of the Olympic movement and a “deep understanding” of key principles including gender equity.

Mori’s resignation from the top post came after weeks of rising pressure from female opposition MPs and youth leaders who protested the country’s entrenched institutional bias towards octogenarian males.

The resignation of the 83-year-old, a former prime minister, over the sexist comments is a first for someone of his profile. His preference was to be replaced with his 84-year-old male colleague Saburo Kawabuchi, but this was swiftly shutdown after further a backlash.

“It is very unusual for men in power to make these comments and resign. They usually just apologise and move on,” said Dr Emma Dalton, an expert in the political under-representation of women in Japan at RMIT university.

“The backlash to Mori’s comments does indicate a real groundswell of women’s discontent and anger. The pressure had become so big that he had to resign.”

Hashimoto, a conservative politician, did not personally call for Mori to step down but she is seen as a safe choice to steer the Games towards a July start date.

“She is very status quo,” said Dalton. “She’s an Olympic athlete and a cabinet minister. So it was just a no brainer. In this instance selecting her is probably enough to placate people.”

The Liberal Democratic Party, which has largely governed Japan since 1955, has also been condemned by female opposition leaders for its lack of representation after decades of being dominated by male ministers, prime ministers and their sons. Women have also been largely frozen out of top level corporate positions on the expectation they would resign after starting a family.

Those criticisms were compounded on Wednesday when the LDP said it would invite five female politicians to its top party meetings, but only as silent observers.

Hashimoto resigned from her ministry on Thursday to take up the role. The Mainichi Daily reported that one Hashimoto’s rivals for the Olympic’s job, Tamayo Marukawa, was expected to replace her, restoring the proportion of women in cabinet to 10 per cent.

The controversy and the sudden upheaval to the Olympics leadership team has not helped preparations for the Games already hampered by rising local unpopularity and coronavirus restrictions. A Kyodo News survey in January found around 80 per cent of Japanese people wanted this year’s Olympic and Paralympic Games to be cancelled.

Tokyo confirmed 378 new cases of COVID-19 on Wednesday. The country recorded less than 1000 cases for the first time in three months on the same day as it began its vaccination rollout by inoculating health and emergency workers.