Former cricketer Michael Slater intends to plead guilty to domestic violence and AVO charges against him if his bid to have them dealt with on mental health grounds fails next year.

The 51-year-old is set to spend Christmas in the mental health unit of Northern Beaches Hospital after he was charged with breaching an AVO with barrage of “harassing and highly offensive” text messages to his ex-partner last week. 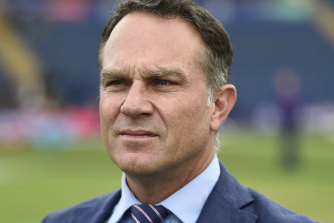 Michael Slater is seeking to have the charges dismissed on mental illness grounds, but will plead guilty if he fails.Credit:Getty

The AVO had been set in October, when he was initially charged with stalking and intimidating the woman at Randwick between October 12 and 13, intending to cause her to fear physical or mental harm. He was also charged with using a carriage service menace, harass or offend her between March and October.

Prior to the alcohol-fuelled AVO breach on December 14, which resulted in him undertaking to spend three weeks in the hospital mental unit, Mr Slater had been due to front Waverley Local Court on Thursday for an application to have the October charges dismissed on mental health grounds.

Appearing for Mr Slater, lawyer James McLoughlin confirmed his client is currently in hospital, telling the court “I saw him there yesterday myself”.

He requested that the applications – under section 32 and section 20BQ of the Mental Health (Forensic Provisions) Act – be heard in 2022.

Although he didn’t enter a plea for his client on Thursday, Mr McLoughlin said: “Mr Slater’s position is that if those applications are not successful, there will be pleas of guilty to all offences.”

The matter will return to court on April 19.