The vaccination rate for Indigenous people in Victoria remains on track to have more than 80 per cent of people receiving one dose by the end of next month, despite being revealed as less “outstanding” than previously thought.

The number of Aboriginal and Torres Strait Islander people thought to have received either a single dose or full vaccination was dramatically reduced on Monday after it emerged that a computer program used by the national immunisation register had incorrectly inflated the data. 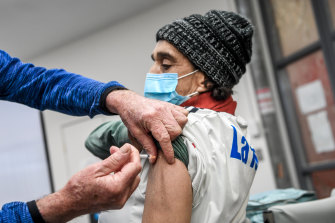 Victoria was thought to be leading other states and territories in terms of Indigenous vaccination, but the adjusted data released by the Australian Immunisation Register reduced the figure for a single dose by 45 per cent.

The figure for fully vaccinated Aboriginal and Torres Strait Islander people in Victoria went from 30,951 to 12,209, a drop of more than 30 per cent.

Speaking to The Age, National Aboriginal Community-Controlled Health Organisation (NACCHO) medical advisor Dr Jason Agostino confirmed the error was due to a bug in a software program used by some GPs in regional Victoria.

Dr Agostino said the problem was identified around late May when the numbers recorded in Victoria were higher than the Commonwealth and NACCHO expected.

“It took a bit of detective work to figure out what was happening with this medical software and then to correct the records,” he said on Tuesday.

“This is software that is not used much in Australia. It’s not one of the big ones that we use and particularly it is not used in our Aboriginal Community Controlled Health Services.

“When it’s uploaded information to the immunisation register, if somebody hasn’t entered the recipient’s Indigenous status it just automatically changed it to ‘yes’.”

Dr Agostino said it was important to note that the GPs using the software had done nothing wrong and that a recent software update had resolved the issue within the program.

Victoria remains one of three jurisdictions along with the ACT and NSW that are on track to close the gap in vaccination coverage, he said.

“The numbers were outstanding before. Now they are ‘OK’,” he said.

“They are still on track to have more than 80 per cent of the population aged 12 years and over to have at least one dose before the end of October, which is the goal nationally for Aboriginal and Torres Strait Islander peoples.”

A spokesperson for the Victorian Aboriginal Community-Controlled Health Organisation said it was discussing the issue and would comment publicly on Wednesday.

The Rural Doctors Association of Australia will also discuss the issue at its meeting on Wednesday.

Stay across the most crucial developments related to the pandemic with the Coronavirus Update. Sign up for the weekly newsletter.