EXCLUSIVE: British soul singer who fell in love with an Australian nursing student 43 years ago takes out a newspaper ad to find her and beg forgiveness for not following her to Sydney – but what does his WIFE think? 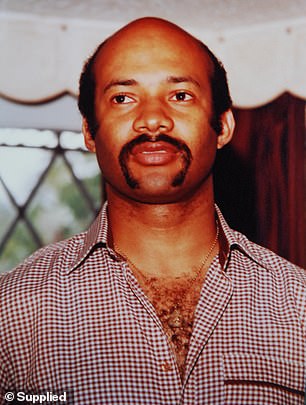 A chart-topping British soul singer has poured out his heart in a public apology to an Australian nursing student he loved and lost in England almost 45 years ago.

Len Coley and his group Delegation were making international disco hits in the mid-1970s when he met a Sydney woman called Philippa who was visiting the United Kingdom.

The pair fell in love but Coley sacrificed any future relationship while chasing more musical success.

Philippa had asked Coley to come to her in Sydney but he stuck with his career in a decision he has regretted ever since.

Four decades later and now aged in his early 70s, Coley wants to track down Philippa to ‘put the record straight’.

Coley – who is married – placed his lovelorn declaration in the personal notices of Saturday’s Sydney Morning Herald under the headline ‘Philippa & Len… 1976, England, UK’.

‘I lost you… ‘ it begins. ‘You should have been the love of my life but I only realized that when it was too late!

‘You told me to come, I should have trusted you… still hurts today…

‘At the time I had just signed a 3 year contract with State Records of London. I had hits in England, Europe and U.S.A. with my group “Delegation” but I would gladly trade that & everything I have if I could to go back & be with you.’ 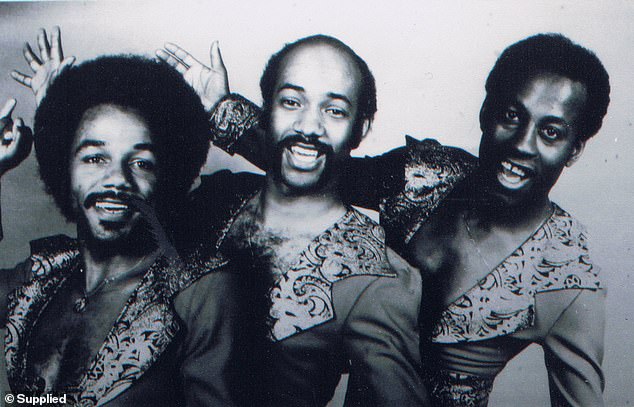 Len Coley (centre) and his band Delegation were making international R&B hits in the mid-1970s when he met a Sydney woman called Philippa who was visiting the United Kingdom. The pair fell in love but he sacrificed any future relationship while chasing more musical success 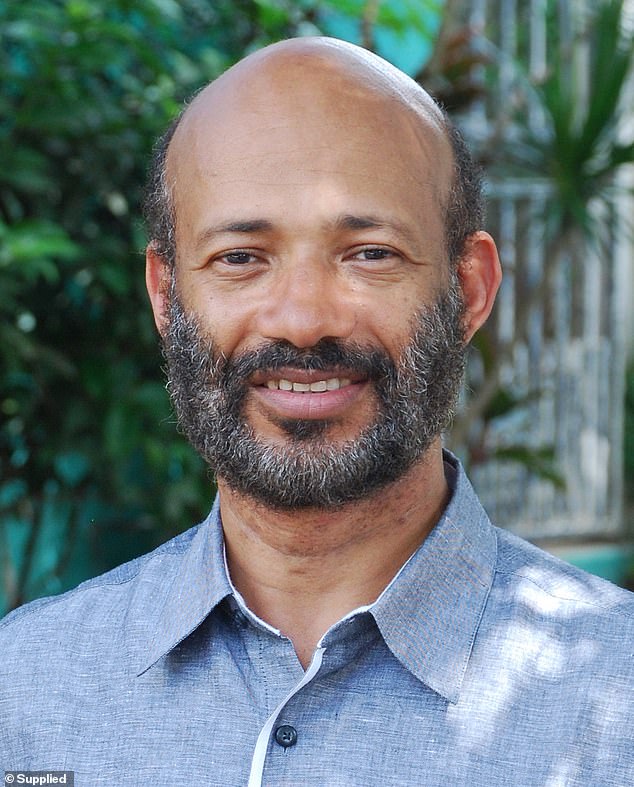 Four decades after losing the love of his life and now married and aged in his early 70s, Coley (pictured recently) wants to track down Philippa to ‘put the record straight’ 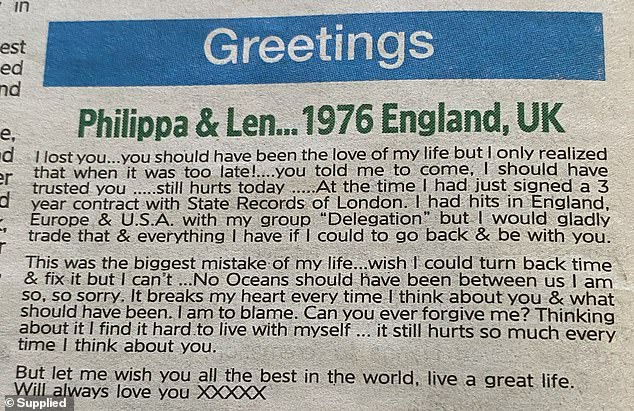 Coley, who is married with three grown children, placed his lovelorn declaration in the personal notices of Saturday’s Sydney Morning Herald under the headline ‘Philippa & Len… 1976, England, UK’

‘This was the biggest mistake of my life… wish I could turn back time & fix it but I can’t… No Oceans should have been between us I am so, so sorry.

‘But let me wish you all the best in the world, live a great life. Will always love you XXXXX’

Coley, who has lived in the Puerto Rican capital San Juan since 2006, told Daily Mail Australia that Philippa had come to England with her New Zealander cousin Mary in late 1975.

‘I met her about a month later and we struck up a relationship,’ he said. Philippa was 24 and Coley was 27.

‘At the time she told me she did not want anything too serious since she was getting over a family tragedy. 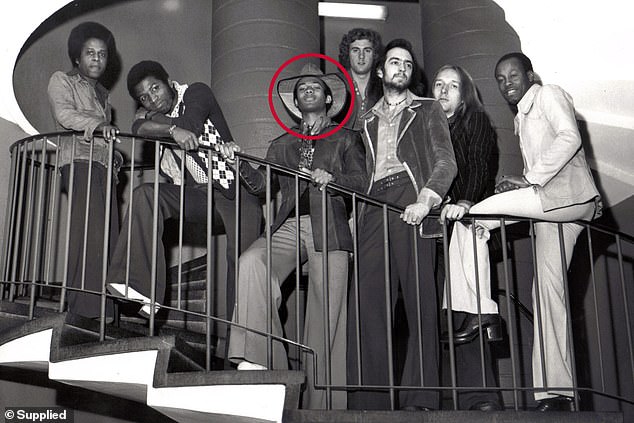 Philippa, a nursing student, asked Coley (circled) to come to her in Sydney but he stuck with his career in a decision he has regretted for the rest of his life 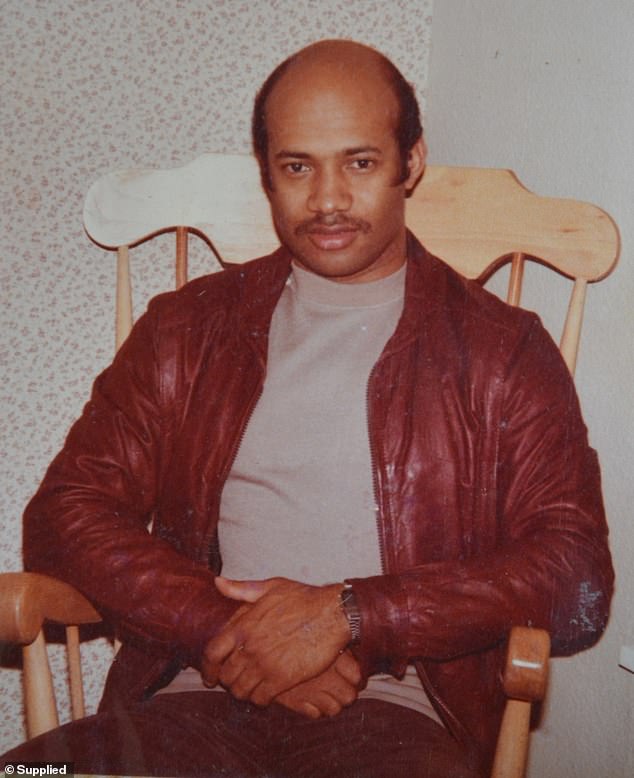 ‘Philippa called me by phone after she returned to Sydney and although she said she would not be returning to England she wanted me to come and be with her in Sydney,’ says Coley, pictured in the 1970s

‘In any event, we continued seeing each other and I think our feelings grew. About sometime in 1976 she and Mary returned to Australia suddenly due to Mary’s mother dying.

‘Philippa called me by phone after she returned to Sydney and although she said she would not be returning to England she wanted me to come and be with her in Sydney. 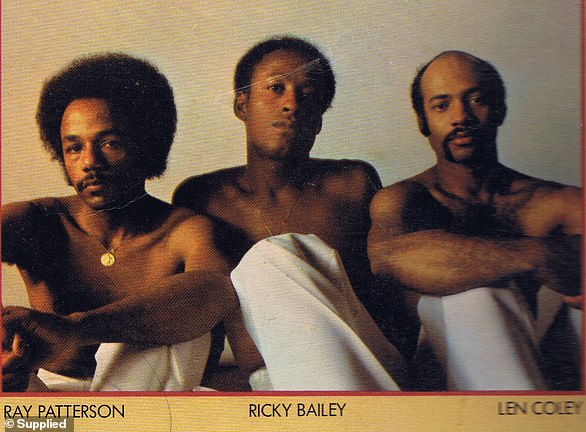 Len Coley formed the funk/soul/R&B group Delegation in the United Kingdom with Ricky Bailey and Roddy Harris in 1976. The group went through several line-up changes

Delegation was discovered by producer Ken Gold, who with writing partner Micky Denne penned songs for stars including Aretha Franklin and Cliff Richard.

Len Coley had formed the funk/soul/R&B group in Birmingham with Roddy Harris in the mid 1970s, drafting in Jamaican-born Ricky Bailey as lead singer.

They were runners-up in British TV talent show New Faces early in their career.

In 1976 the group released its first single, The Promise Of Love, from their debut album of the same name on the State Records label.

The next single from that album, Where Is The Love (We Used To Know) charted in February 1977 and Delegation made their first appearance on Top Of The Pops.

Two more hits from The Promise Of Love followed: You’ve Been Doing Me Wrong and the ballad Oh Honey, which reached number five on the US R&B charts.

Delegation’s second album, Eau De Vie, with the line-up of Bailey, Patterson and Dunbar, produced hits You And I, Put A Little Love On Me, Heartache #9 and Darling I Think About You.

Dunbar left the group in 1981 after a third album, Delegation, leaving Bailey and Patterson to tour as a duo. Patterson quit in the mid 1980s after two more albums, Deuces High and Encore.

‘I was a little confused because I had thought she did not want a serious relationship but here she was wanting me to emigrate to Australia.

Coley ended the phone call prematurely, concerned about the cost of Philippa ringing from Australia and ‘foolishly not thinking she would take it badly’.

‘She wrote to tell me how in love she was and I kept thinking about my feelings for her which had grown,’ he said.

‘I sent her one of my recordings from Delegation to the address I had for her at the time, but this came back to me marked “Gone Away”.

‘I guess she may have been angry thinking I had rejected her or she had indeed moved.

‘We have had no contact since and as time went on and I fully realised how I felt about her, I was gutted but had no way of making contact.’ 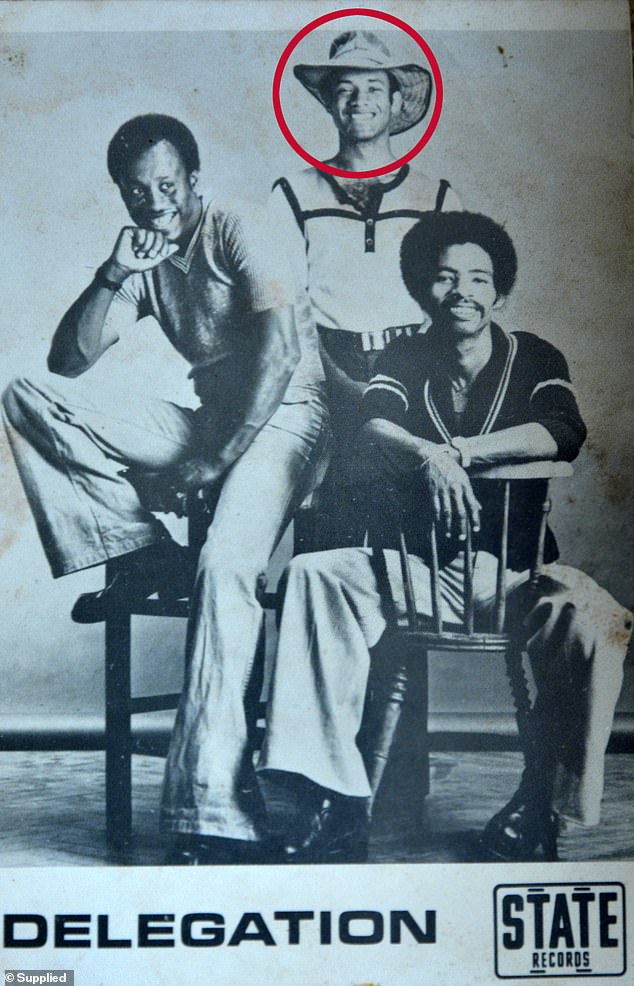 ‘Of course I wished I had chosen Philippa,’ Coley (circled) says. ‘Ironically, one of the hits I had with Delegation is entitled “Where is the love we used to know, how did we lose it, where did it go”‘

Coley, a grandfather with three grown children, realises Philippa likely met another man and started her own family.

‘I know she has lived her life with her own family and I have the same,’ he said. ‘It is just that I can’t forget her and wanted to at least let her know how I felt.’

Coley still regrets not asking for a release from his three-year recording contract and flying straight to Australia.

‘Of course I wished I had chosen Philippa,’ he said. ‘Ironically, one of the hits I had with Delegation is entitled “Where is the love we used to know, how did we lose it where did it go”.’ 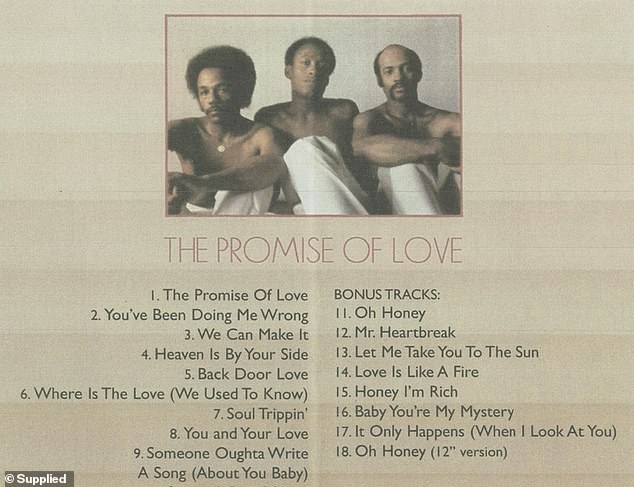 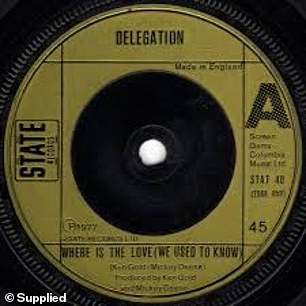 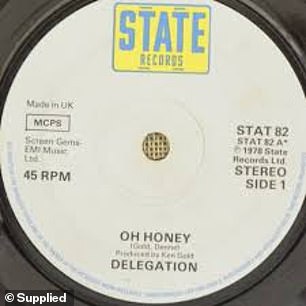 The second single (left) from Delegation’s first album, The Promise Of Love, was called Where Is The Love (We Used To Know). The ballad Oh Honey, (right) also from The Promise of Love, reached number five on the United States R&B charts

As to why he had decided to declare his enduring love now, Coley said he wanted to ‘put the record straight’.

‘Well, I never forgot Philippa as you can see in my notice. We did fall in love with each other and I should have gone to see her in Sydney but never did.

‘Of course I wished I had. There were so many things going on for me at the time and she should have been my priority.

‘Now I guess I wanted her to know I never rejected her by not coming to Sydney – I loved her, although I felt it more so much later.

‘I just wanted to put the record straight. She was my first real love so I could never forget her, ever.’