The people of Geelong can be thankful to Colin Atkins for many things. The bypass road, Deakin University, the Animal Health Laboratory, the Marine Sciences Complex at Queenscliff – even the car ferry to Sorrento.

These community assets came about through the dogged determination and rat cunning of Col Atkins. He loved Geelong and believed there were ways to strengthen its economy – ways that had probably not been thought of before.

One of his first tasks at the original regional planning authority was to cement-in-stone the Outer Freeway Reservation which had been on planning scheme maps since the Town & Country Planning Board days of the 1940s.

While councils recognised the reservation was there (“in theory”) they sometimes let down their guards and allowed adjoining landowners to graze stock on it, on short-term leases. Atkins argued that it would become almost impossible to protect the reservation if it continued to be used in this way, especially if buildings or other structures started to appear on it

He insisted that the councils agree to declare the reservation untouchable and to have this declaration approved by the Minister for Planning. Today we have, in the bypass road, the greatest piece of infrastructure built in Geelong for more than 50 years. Another thorny planning issue for the planning authority was the creation and approval of the regional planning scheme.

The state government saw it was important that planning for Geelong’s future be taken out of the hands of the 1970s nine municipal councils and given to an umbrella body to administer.

The mainly urban councils (Geelong, Geelong West, Newtown and Queenscliffe) did not have any rural land to develop, so they were not much concerned with the ramifications of controlling the region’s farming land. The mainly rural councils (Bannockburn, Barrabool, Bellarine, Corio and South Barwon) had run ad-hoc planning for years, allowing farmers to slice off parts of their properties to generate cash flow.

Atkins convinced them that Geelong’s extremely valuable farming land would become a patchwork of small holdings if these practices continued. It was a hard fight. Many outlandish claims were made to try to stop it happening. But common sense prevailed. The growth centres program, developed under the Whitlam government, gave Atkins another great opportunity. 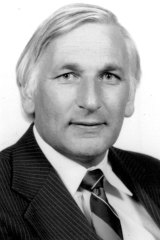 He pushed for a detailed employment report to analyse the structure of Geelong’s employment and compare it with other population centres throughout Australia. The reliance on blue-collar work was highlighted as one of the millstones around our necks; we needed to move away from blue and become a white-collar town.

As a result, Atkins worked tirelessly to have the state and federal governments change their minds on Victoria’s “fourth university” (after Melbourne, Monash and La Trobe).

It was always going to be a university for rural Victoria and was destined to be established in Ballarat. Colin Atkins went to work and convinced the decision-makers that Geelong was a more worthy and suitable location – mainly due to the “tertiary” presence of the CSIRO division of wool technology (established in the 1940s) and the design-and-make strengths resident at Ford, our burgeoning health and education sectors, the textile industries and elsewhere.

Plus the Havas report into Geelong’s structural employment problems practically demanded that Deakin be established in Geelong. He won the day. Then, in the Fraser years the animal health laboratory was up for grabs. It had a rural focus and was going to be established in a non-metropolitan area.

Atkins identified a large piece of commonwealth-owned land in Geelong – the site of the rifle range at the edge of Eastern Park. No major land purchase would be required.

The site was also conveniently isolated from the general population. These arguments won the day – plus the fact that the decision to establish Deakin had been made shortly before, adding to Geelong’s “tertiary-industry cred”. The marine science complex was originally intended to go to Sorrento, but Atkins set his staff to work to show that the travel time of scientists from Queenscliff to Melbourne (where the laboratory’s head office was located) was eminently faster than the travel time from Sorrento. There were also significant issues relating to boat access at the former quarantine station that had been a major argument used by the proponents on the other side. Another win to Atkins.

Before the car ferry became a certainty, there was a lot of discussion about putting government money into berthing facilities at Queenscliff for a privately operated business. Atkins had the staff demonstrate that there was “12 kilometres of road” missing from Victorian road maps – the distance between the Bellarine and Mornington peninsulas’ main towns.

Roads are community infrastructure. The state government agreed to contribute to the berthing facilities at Queenscliff and Sorrento. Victoria now has a world-class ferry service that fills in the transport gap around Port Phillip.

Later he used the commission’s staff and resources to convince government transport planners that the national standard-gauge rail link should be routed through Geelong and not via Ballarat. Expert engineering staff made the case that future rail access to Avalon Airport and the Port of Geelong made it essential that Geelong was not treated as a branch line. They also demonstrated that there was a technical issue of the rail-line gradient on the Melbourne-Ballarat line and how it adversely affected the speed of the trains.

These achievements (and many others) were made through Atkins’ high-level contacts in government, the public service and trade unions and were the result of many days and nights of negotiating, arm twisting and paperwork. His triumphs have given us a New Geelong, one far better placed to suffer the slings and arrows of economic misfortune.

He fought the good fight. Other people can comment on the relentless standoff between the original nine municipalities and the Geelong Regional Planning Authority/Geelong Regional Commission. But governments of different stripes knew that infighting and egos had, for generations, stifled Geelong’s growth.

What they wanted was a strong man, capable of cutting through time-wasting and self-serving local government officialdom. They got their man in Colin Atkins.