Myanmar leader tells investors to stop focussing on ‘negative aspects’ in Rakhine from where 750,000 Rohingya have fled. 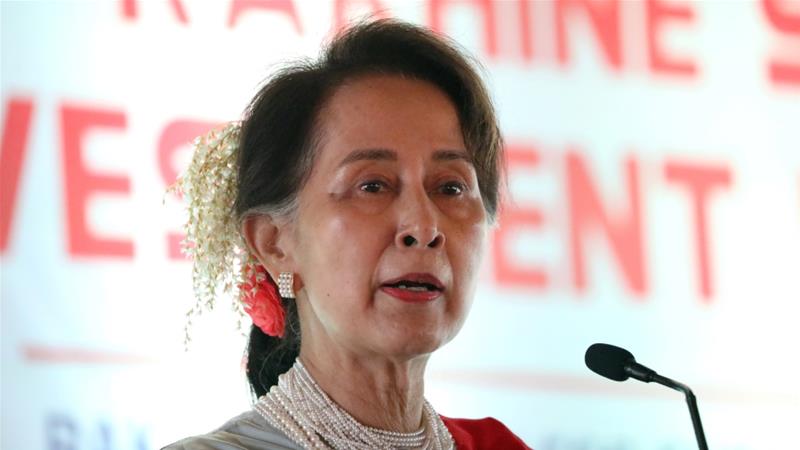 State Counsellor Aung San Suu Kyi has told global investors to pour their money into Myanmar’s crisis-hit Rakhine state, saying the world needed to stop focussing on “negative aspects” in the province from where some 750,000 Rohingya have fled.

Addressing an investment fair in Ngapali beach on Friday, Myanmar’s leader emphasised responsible business practices during her rare visit to the region.

She made only a brief reference to the conflicts that have roiled Rakhine and failed to mention the Rohingya.

“For too long, the international community’s attention has been focussed narrowly on negative aspects related to problems in north Rakhine rather than on the larger picture that shows the immense potential of this state for peace and development,” Aung San Suu Kyi said.

She said her government recognised the “grave challenges” it faced in Rakhine state and was doing its utmost to address them.

Described as the “world’s most persecuted minority,” around 750,000 Rohingya have fled from Rakhine state to Bangladesh since late 2017, taking with them stories of rape, torture, and massacres at the hands of Myanmar’s security forces.

However, a United Nations fact-finding mission reported last year that the 2017 military campaign was orchestrated with “genocidal intent”.

The Nobel laureate has pledged to make Myanmar more investment-friendly as her government attempts to reverse a drop in foreign investment since the Rohingya exodus sparked global outrage.

The European Union has warned it could impose trade sanctions on Myanmar, potentially stripping the country of tariff-free access to the world’s largest trading bloc.

The measures could include Myanmar’s lucrative textile industry and potentially put thousands of jobs at risk.

Friday’s investment fair was attended by Myanmar officials, UN staff and investors and diplomats mostly from Japan, South Korea and elsewhere in Asia.

Domestic and foreign investment could play a crucial role in the state, Aung San Suu Kyi said, but warned against irresponsible investments like “unchecked expansion of commercial fishery projects” that could damage Rakhine’s coastal mangrove forests.

Some experts warn a focus on economic solutions to Rakhine’s problems could cement the marginalisation of the mostly stateless Rohingya.

A Reuters special report in December revealed that officials had built new homes for Buddhists where the Rohingya once lived, making the return of many refugees to their original homes impossible.