A Sydney businessman who was allegedly kidnapped and beaten in the city’s south last year has been arrested on a historic drugs possession charge in Fiji.

Sam Amine, 46, was at home with his wife in San Souci on June 9, when four armed men allegedly broke into the house, pulled him into a stolen BMW and took him to a place in Padstow where he was assaulted. He escaped just before midnight by climbing out of a window. 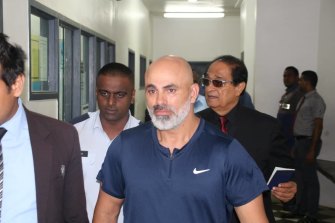 Fijian police allege that during a 2019 search of a unit belonging to Sam Amine, they found 451.6 grams of anabolic steroids hidden in the home’s meter box. Amine owns several gyms in the country. Credit:Fiji Police Media

The Fiji Sun newspaper reported that Amine faced Nadi Magistrates Court last month and was charged with one count of unlawful possession of illicit drugs, namely steroids, in 2019.

The Fiji Police Force allege that, after searching a Fijian unit belonging to Amine in February 2019, they found 451.6 grams of anabolic steroids. Amine owns several gyms in the country.

Amine was allowed to leave the country before charges had been laid but returned last week when he was arrested and taken into custody, before facing court.

He was granted bail on the condition he pay a bond of $2000, surrender his passport and agree not to leave Fiji.

He will return to Nadi Magistrates Court on June 25.

Fiji police said the arrest was made possible in partnership with the Australian Federal Police and Fijian government, immigration and intelligence departments.

Three men in their early to mid-20s have been charged over the kidnapping of Amine last year. This matter is before the courts.