A 69-year-old self-proclaimed Tai Chi master has insisted he was ‘tricked’ into a fight during which he was knocked out cold by a 50-year-old kickboxer in 30 seconds.

Ma Baoguo, who pledged to defend the honour of traditional Chinese Kung Fu, is seen in viral footage being floored three times within half a minute by Wang Qingming, a retired soldier and kickboxing coach during an amateur match in May.

Over six months after the match, Mr Ma claimed this week that he had been cheated by his opponent who ‘lacked martial arts ethics’. 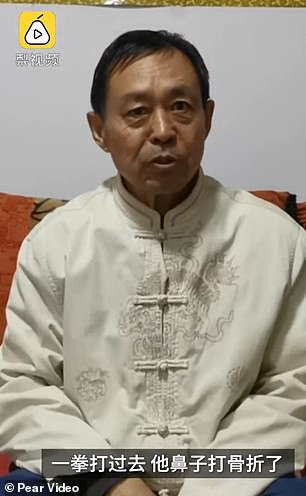 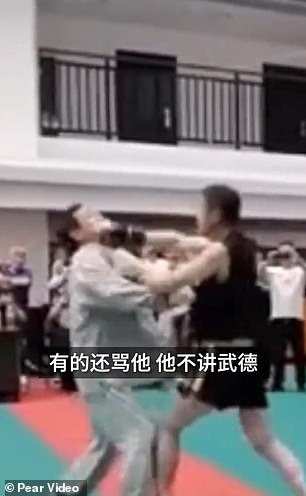 Over six months after the match, Mr Ma (pictured left) claimed that he had been cheated by his opponent who ‘lacked martial arts ethics’. The fightook place on May 17 in the city of Zibo

Mr Ma told reporters recently that he wanted to showcase his Kung Fu abilities and did not fight properly in the match which he described as ‘a trap’.

‘I usually fight [in competitions] abroad,’ the avowed expert told the Chinese video news outlet Pear. ‘I wanted to showcase [my skills] a little bit in China.

‘But I fell into the trap. I was tricked. The opponent lacked martial arts ethics,’ Mr Ma added. ‘People have told me that they knew I didn’t go  any further than necessary, but he was really hitting me.’

The self-proclaimed master also insisted that he could have easily killed Mr Wang, if he wanted to, adding that kicking boxing was ‘mere entertainment’.

‘Kickboxing came out of nowhere by picking and practising the easy movements from traditional martial arts,’ Mr Ma said. 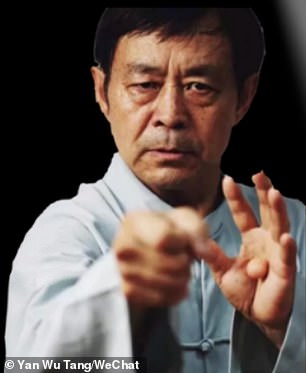 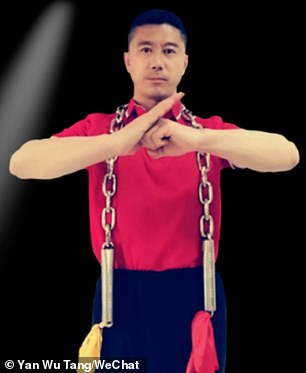 The fight, which took place on May 17 in the city of Zibo, Shandong province of eastern China, was part of an amateur tournament held by Yan Wu Tang, a private martial arts training camp.

In a social media post before the fight, Mr Ma vowed to ‘defend traditional Kung Fu’s reputation’ as he was up against Mr Wang, a kickboxing coach from Zibo, who was 19 years Ma’s junior.

Mr Ma’s ambition to safeguard his craft’s prestige quickly vanished with embarrassment after he fell to the floor three times during the 30-second duel. He was immediately tended to by medics at the tournament.

The fight was live-streamed online and watched by over 40,000 people on the internet as the match took place, Chinese media report.

Mr Ma, who calls himself the ‘Tai Chi grandmaster’, later said on his social media page that he did not suffer any severe injuries. 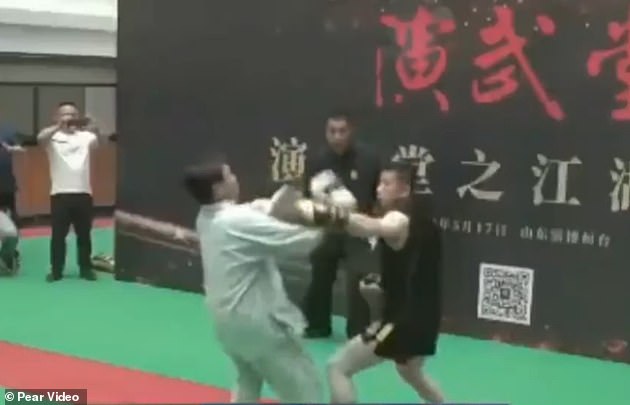 The fight, which took place in the city of Zibo, Shandong province of eastern China, was part of an amateur tournament held by Yan Wu Tang, a private martial arts training camp 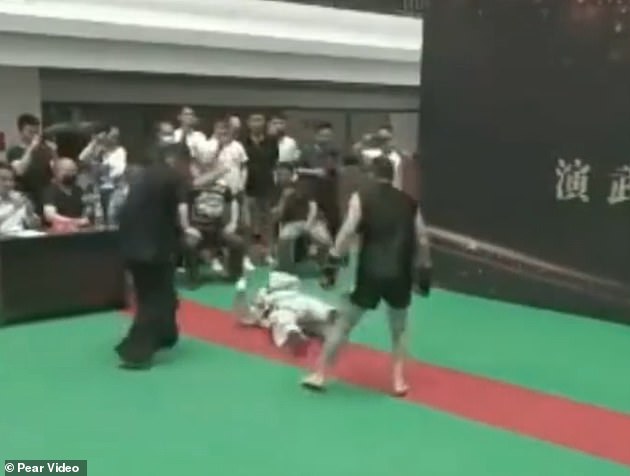 Millions of social media users were amused by footage of the fight, which quickly became a trending topic on Weibo, the Chinese equivalent of Twitter.

Many netizens mocked Mr Ma for ‘promoting fake kung fu’ while others criticised the fight as a ‘ridiculous mismatch’ due to the two fighters’ age gap.

One wrote: ‘What a liar. Tai Chi can only be used as a health exercise, not in real fighting.’

Another commented: ‘How can an elderly man fight against someone much younger?’

In response to the controversy, the Tai Chi master claimed in a separate post that it was not ‘appropriate’ to use traditional Kung Fu on a fighting platform.

The self-proclaimed Tai Chi master initially rose to fame by claiming that he had previously defeated Peter Irving, a British MMA fighter as he posted a video as ‘proof’ in 2017.

The elderly master’s boast was challenged by Xu Xiaodong, an ex-MMA fighter nicknamed ‘Mad Man’, who arranged a duel with Mr Ma to prove that traditional kung fu is a scam.

The fight was cancelled by Shanghai police due to the venue being unlicensed and unlawful assembly.

Peter Irving also made a public post on Facebook claiming the video he made with the elderly master was an acting job in a vanity project for Mr Ma.

‘Recently, probably because of the tension about the MMA fighter challenging traditional martial arts in China, he decided to edit the footage and claim he’d beaten me in a real fight,’ wrote Irving.

‘When I heard I just thought it was a bit ridiculous and I felt sorry for him, and thought he was just rather sad.’