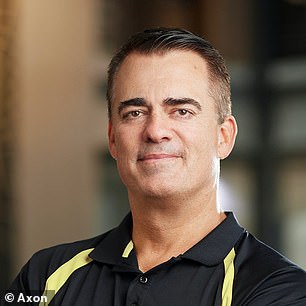 Rick Smith, the CEO of Axon, on Monday announced his company was no longer pressing ahead with plans for Taser drones. But nine of 12 members of his ethics board had already decided to resign in protest

Nine members of the 12-person ethics board of a Taser maker have resigned in protest at the company’s announcement that they would begin trialing taser drones – despite the company rapidly backpedalling amid a significant backlash.

Axon Enterprise, founded in Arizona in 1993, said on June 2 that they were working on ‘a remotely operated, non-lethal drone system’ for use in schools, to stop mass shootings.

Axon first approached its ethics board more than a year ago about Taser-equipped drones, and the panel last month voted eight to four against running a limited police pilot of the technology.

Rick Smith, the CEO, in May 2019 published a comic book entitled ‘The End of Killing’, which depicted drones at work in a school shooting in Arizona; stopping a terrorist in Syria; and preventing a ‘suicide by cop’ in Florida.

Smith, on the question of Taser drones, overruled the board’s concerns.

‘I am done waiting for others to solve the problem… So we’re going to solve it!’ he tweeted. 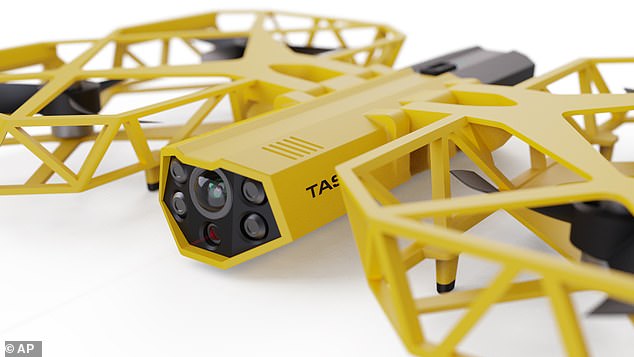 This photo provided by Axon Enterprise depicts a conceptual design through a computer-generated rendering of a taser drone. The project has now been put on hold 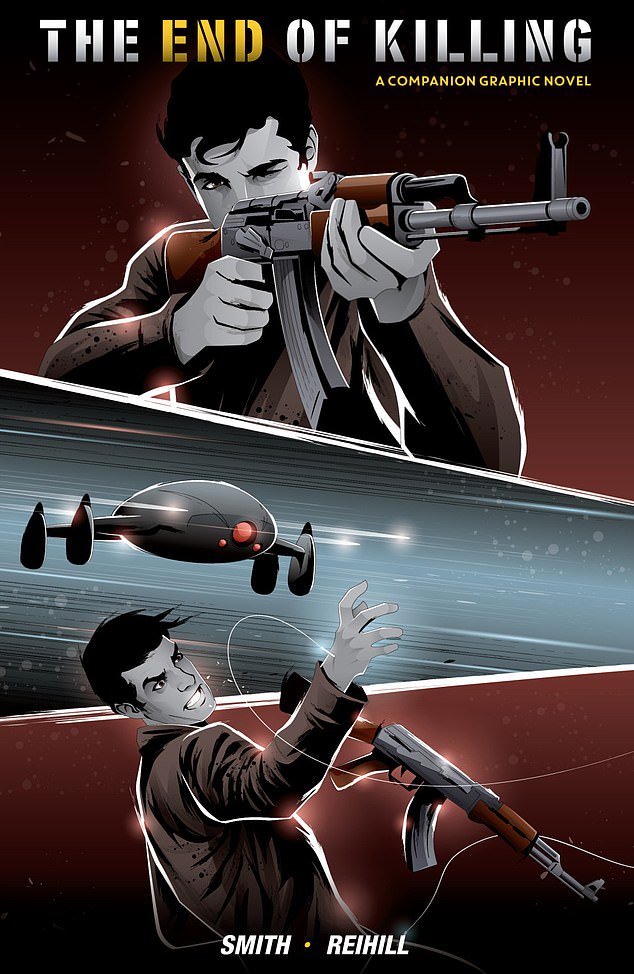 Smith in 2019 published a graphic novel, in which he demonstrated ways he thought the drone could be used

Smith said the May 24 school shooting in Uvalde, Texas, which killed 19 children and two teachers, prompted Axon to announce the scheme, despite the board vote.

Police in Uvalde waited outside the school for over an hour while the gunman rampaged through the building – mistakenly believing he was barricaded inside, away from the children.

Axon said it was working on a drone that first responders could operate remotely to fire a Taser at a target about 40 feet away.

The ACLU immediately condemned the idea.

‘Drones armed with tasers will make it too easy for law enforcement to exert violence, including at protests and in communities already most harmed by policing,’ they tweeted.

‘Our communities deserve to feel safe. This device is not the answer.’

Axon, which also sells body-worn cameras and policing software, has said its clients include about 17,000 out of the roughly 18,000 law enforcement agencies in the United States. 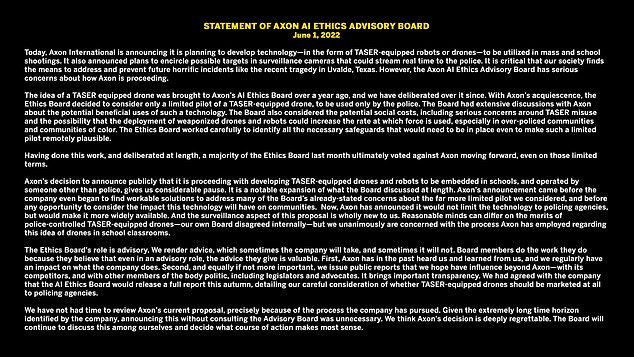 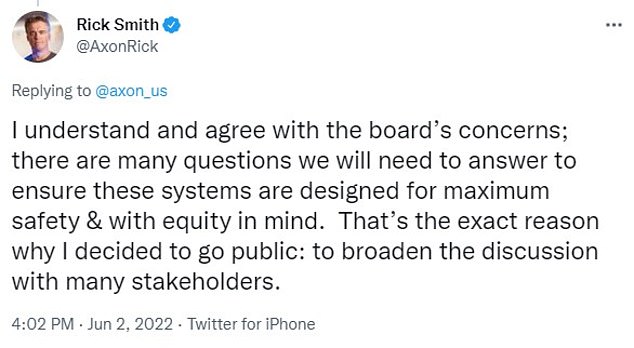 ‘I understand and agree with the board’s concerns; there are many questions we will need to answer to ensure these systems are designed for maximum safety & with equity in mind,’ Smith tweeted.

‘That’s the exact reason why I decided to go public: to broaden the discussion with many stakeholders.

‘I know one thing and believe it with every fiber of my being: we can design a system to stop active shooters that is far safer than today’s technology, which is simply a person with a gun.’

One critics replied: ‘You cannot do it in a way that would avoid also empowering random people to attack innocent civilians with a drone, as your advisory board so clearly pointed out.

‘Your choice to ignore their recommendations says everything we really need to hear.’

Smith denied ignoring the board.

‘I agree with you 100%. And not ignoring our board. I chose to take the conversation public to hear a wider array of voices,’ he said.

‘We haven’t productized anything yet. I believe we have design choices that can directly address your concern.’

On Monday, Smith announced the project had been paused. 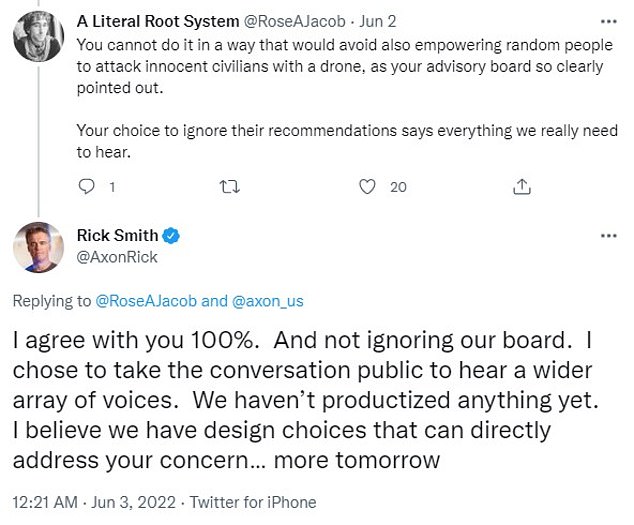 ‘Today Axon has announced we are pausing work on the TASER Drone project & will refocus to further engage with key constituencies to explore best path forward,’ he said.

Yet the board members – many of them respected independent legal and ethics experts and academics – said they could not continue to work with Smith. 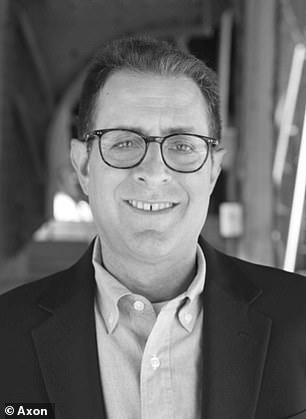 Barry Friedman, chair of the board, was one of nine to resign on Monday

The action by ethics board members marked a rare public rebuke for one of the watchdog groups some companies have set up to gather feedback on emerging technologies, such as drones and artificial intelligence (AI) software.

In a statement explaining their resignation, the nine said they had ‘lost faith in Axon’s ability to be a responsible partner.’

‘We wish it had not come to this,’ the statement said.

‘Each of us joined this Board in the belief that we could influence the direction of the company in ways that would help to mitigate the harms that policing technology can sow and better capture any benefits.’

Barry Friedman, a New York University law professor and chair of the board, was among those to resign.

‘We tried from the start to get Axon to understand that its customer has to be the community that a policing agency serves, not the policing agency itself,’ Friedman told AP.

‘It has been a painful struggle to try to change the calculus there.’ 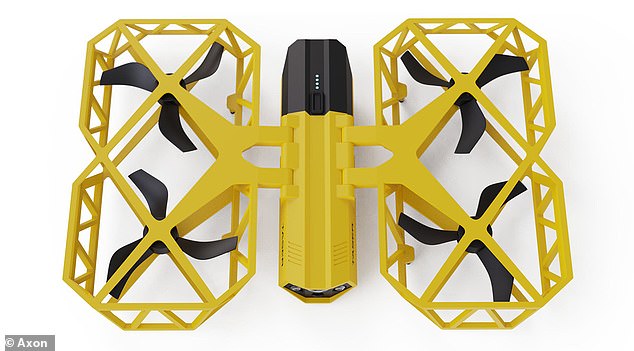 Friedman said a major concern was Smith’s decision to move forward with the plan and announce it publicly without adequately hearing the concerns of the board members.

‘What’s the emergency? School shootings are a crisis. I agree,’ Friedman said.

‘But Axon, on its own best timeline, isn’t going to come up with anything for a couple of years. Why was it necessary to jump ahead like this?

‘What Rick is suggesting is a necessary public dialogue was really just jumping over the head of the board,’ Friedman said.

Ryan Calo, a University of Washington law professor, said he was dismayed at the company’s direction.

‘I’m not going to stay on an advisory board for a company that departs so far from expectation and protocol or, frankly, who believes ubiquitous surveillance coupled with remote non-lethal weapons is a viable response to school shootings,’ he said.

Smith said it was ‘unfortunate that some members of Axon’s ethics advisory panel have chosen to withdraw from directly engaging on these issues before we heard or had a chance to address their technical questions.’

He added: ‘We respect their choice and will continue to seek diverse perspectives to challenge our thinking and help guide other technology options.’ 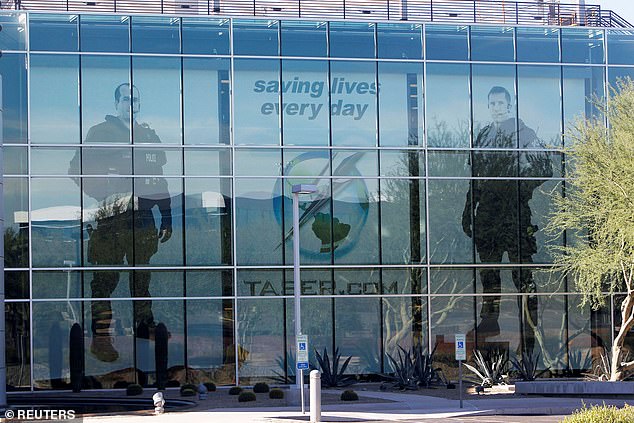 The headquarters of Axon are seen in Scottsdale, Arizona

Wael Abd-Almageed, an engineering research associate professor at University of Southern California, said the idea was too dangerous.

‘What we have right now is just dangerous and irresponsible,’ said Abd-Almageed,

The board likewise had not evaluated use of the drones by first responders outside police, it said.

And members questioned how a drone could navigate closed doors to stop a shooting.

The drone is ‘distracting society from real solutions to a tragic problem,’ resigning board members said in a Monday statement.

Smith has said drones could be stationed in hallways and move into rooms through special vents.

A drone system would cost a school about $1,000 annually, he said.

Formed in 2018, the ethics panel has guided Axon productively on sensitive technologies such as facial recognition in the past.

Giles Herdale, one of the remaining ethics board members, told Reuters he chose not to resign because he could have more influence ‘if I am in the tent than outside it.’