HONG KONG (Reuters) – Tens of thousands of Hong Kong demonstrators surrounded the Chinese-ruled city’s legislature on Wednesday, forcing it to postpone a second round of debate on an extradition bill that would allow people to be sent to mainland China for trial.

The protesters, most of them young people dressed in black, erected barricades as they prepared to hunker down for an extended occupation of the area, in scenes reminiscent of pro-democracy “Occupy” protests that gridlocked the former British colony in 2014.

Protesters rallied in and around Lung Wo Road, a main east-west artery near the offices of embattled Hong Kong Chief Executive Carrie Lam, as hundreds of riot police, some armed with batons and plastic shields, warned them to stop advancing.

“Didn’t we say at the end of the Umbrella movement we would be back?” pro-democracy lawmaker Claudia Mo said, referring to the name often used for the “Occupy” demonstrations.

“Now we are back!” she said as supporters echoed her words.

Others once again called for Lam to step down.

Opposition to the bill on Sunday triggered Hong Kong’s biggest political demonstration since its handover from British to Chinese rule in 1997 under a “once country, two systems” deal guaranteeing it special autonomy, including freedom of assembly, free press and independent judiciary.

But many accuse China of extensive meddling since then, including obstruction of democratic reforms, interference with local elections and of being behind the disappearance of five Hong Kong-based booksellers, starting in 2015, who specialized in works critical of Chinese leaders.

Lam has vowed to press ahead with the legislation despite deep concerns in the Asian financial hub, including among business leaders, that it could undermine those freedoms and investor confidence and erode the city’s competitive advantages.

The government said debate on the bill that was due to take place in the city’s 70-seat Legislative Council on Wednesday would be delayed until further notice.

The legislature is controlled by a pro-Beijing majority.

“We won’t leave till they scrap the law,” said one young man wearing a black mask and gloves.

“Carrie Lam has underestimated us. We won’t let her get away with this,” he said.

Live blog of the protests: reut.rs/2Iajtez

Beijing again reiterated that the “one country, two systems” formula is best for maintaining long-term prosperity and stability.

“The practice of ‘one country, two systems’ in Hong Kong has achieved remarkable success. This is an undeniable objective fact,” Taiwan Affairs Office spokesman An Fengshan told a regular news briefing in Beijing.

Many of the protesters, who skipped work, school or university to join the rally, defied police calls to retreat and passed around provisions, including medical supplies, goggles, water and food.

Some stockpiled bricks broken away from pavements.

Chief Secretary Matthew Cheung urged the protesters to stop occupying the road and appealed for calm and restraint. “We also appeal to the people who are stationed to … disperse as soon as possible, and not to try to defy/challenge the law,” he said. 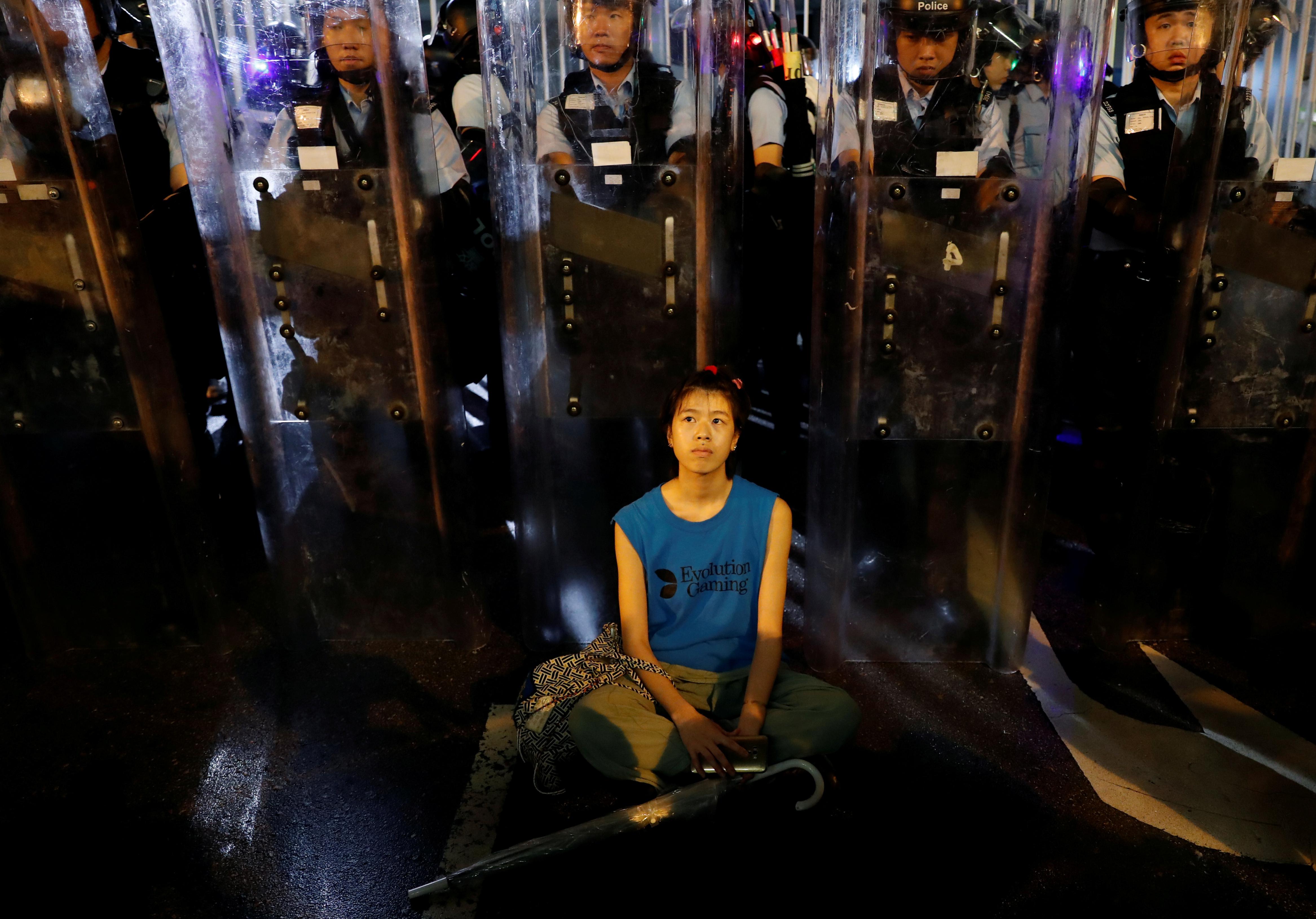 The demonstrators rallied just a stone’s throw from the heart of the financial center where glittering skyscrapers house the offices of some of the world’s biggest companies, including HSBC.

The massive rally was also within sight of the Hong Kong garrison of China’s People’s Liberation Army, whose presence in the city has been one of the most sensitive elements of the 1997 handover.

Standard Chartered, Bank of East Asia and HSBC suspended bank operations at some branches in the area.

A spokesman for bourse operator Hong Kong Exchanges and Clearing (HKEX) said Lam would not attend a cocktail reception on Wednesday as previously planned.

Demonstrators began joining overnight protests earlier on Wednesday as businesses across the city prepared to go on strike.

Lam has sought to soothe public concerns and said her administration was creating additional amendments to the bill, including safeguarding human rights.

Under the proposed law, Hong Kong residents, as well as foreign and Chinese nationals living or traveling through the city, would all be at risk if they are wanted on the mainland.

Sunday’s protest, which organizers said saw more than a million people take to the streets, in addition to a snowballing backlash against the extradition bill, could raise questions about Lam’s ability to govern effectively.

The protests have plunged Hong Kong into political crisis, just as the 2014 demonstrations did, heaping pressure on Lam’s administration and her official backers in Beijing. 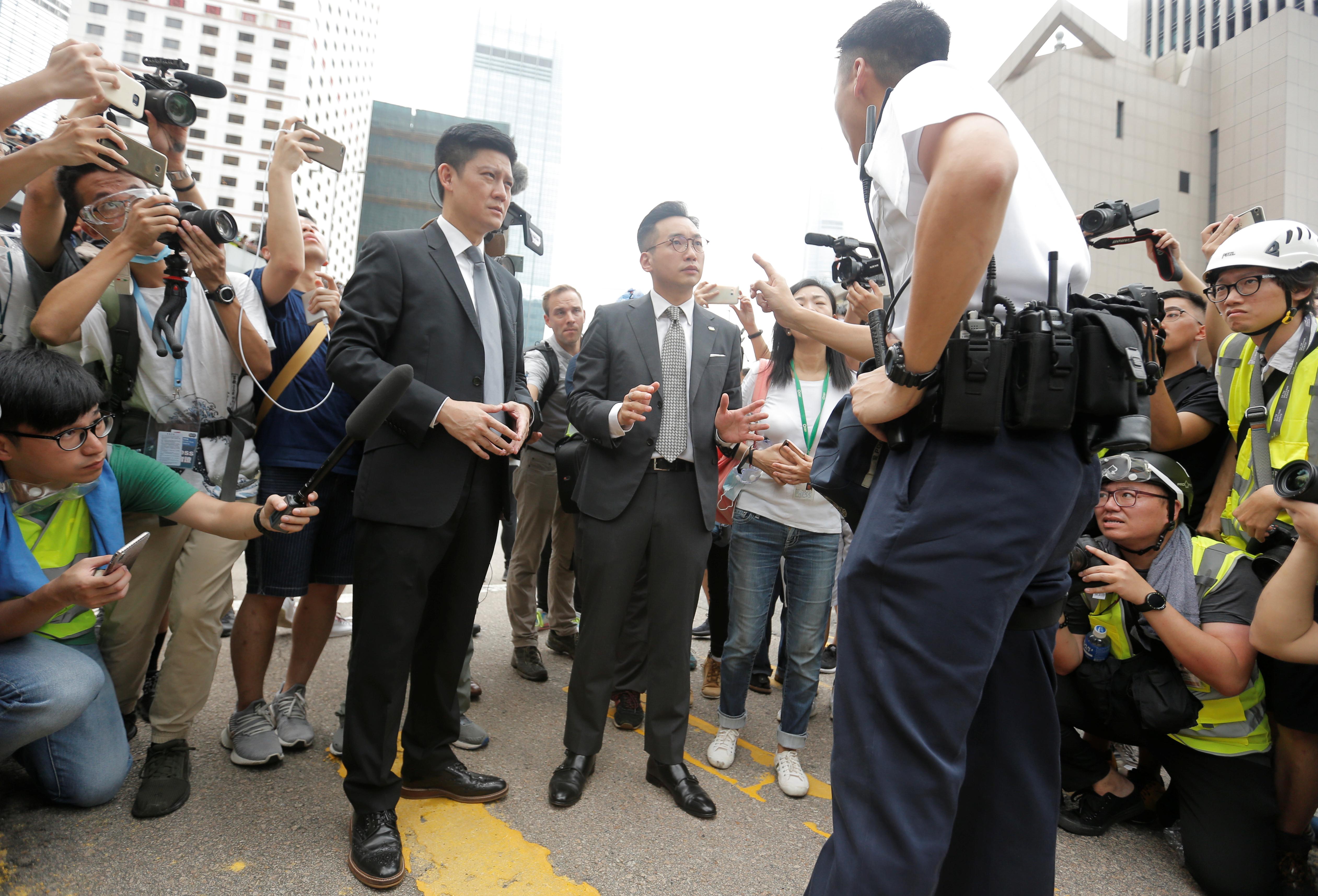 The failure of the 2014 protests to wrest concessions on democracy from Beijing, coupled with the prosecutions of at least 100 mostly young protesters, initially discouraged many from going back out on the streets. That changed on Sunday.

The Catholic Diocese of Hong Kong called on the government not to pass the bill “hurriedly” and urged Christians to pray for the city. Lam, who warned against “radical action” at the protests, is a Catholic.

Human rights groups have repeatedly cited the alleged use of torture, arbitrary detentions, forced confessions and problems accessing lawyers in China, where courts are controlled by the Communist Party, as reasons why the Hong Kong bill should not proceed.

China denies accusations that it tramples on human rights and official Chinese media said this week “foreign forces” were trying to damage China by creating chaos over the extradition bill.