CORONAVIRUS infections are still rising in 15 areas in England and this interactive map reveals if your area is on the list.

Data from Public Health England (PHE) shows that cases of the virus have fallen in 95 per cent of local authorities across the country.

The data from PHE comes as experts have warned that the third national coronavirus lockdown could last longer if the South African variant of the virus continues to spread across the country.

Dr Mike Tildesley said "it's very possible" the mutated strain is already widespread in the UK – as 147 cases were confirmed by the health minister.

Mass testing programmes have now been rolled out across 13 areas in England in order to detect cases of the virus and stop them spreading through the community.

But as cases fall in 300 local authorities across the country, there are 15 places that have seen a rise.

Data from PHE accounts for the seven days up to February 1. 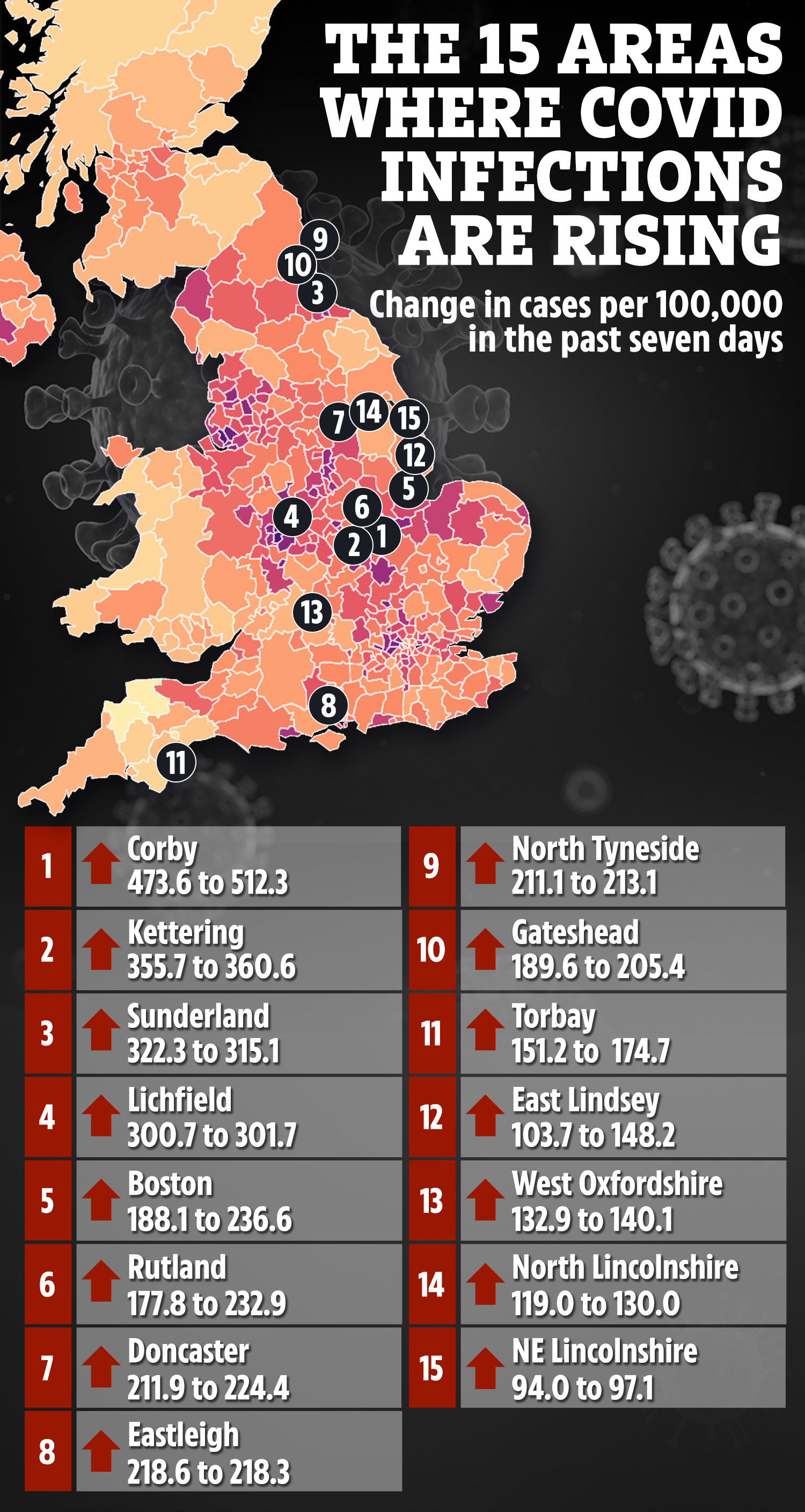 MPs in the area are now calling for mass testing and have said that infection rates are taking longer to decline in the area.

Consultant in Public Health at Northamptonshire County Council, Rhosyn Harris said rates are plateauing in the area and are rising again in some age groups.

Cases have also seen a rise in Kettering, also in Northamptonshire which has risen from 355.7 to 360.6.

Over the weekend local media reported that 10 care homes in the area have seen outbreaks of the virus.

Sunderland has also seen an increase in infection rates, rising from 315.1 to 322.3.

Infection rates have also risen in Lichfield in Staffordshire, which has seen an increase from 315.1 to 322.3 cases per 100,000 of the population.

People in several areas of Lichfield were urged to get tests over the weekend – even if they aren't experiencing any symptoms of the virus – such as a new persistent cough, a loss of taste and smell and a high temperature.

Residents in Alrewas, Fradley, Boley Park, Boney Hay, Chasetown, Fazeley, Summerfield and All Saints have been urged to travel to sites such as Lichfield City FC and Burntwood Leisure Centre.

Just last week an outbreak of Covid-19 was confirmed at HMP Stocken in the area.

The prison confirmed four out out of its seven wings had detected cases. 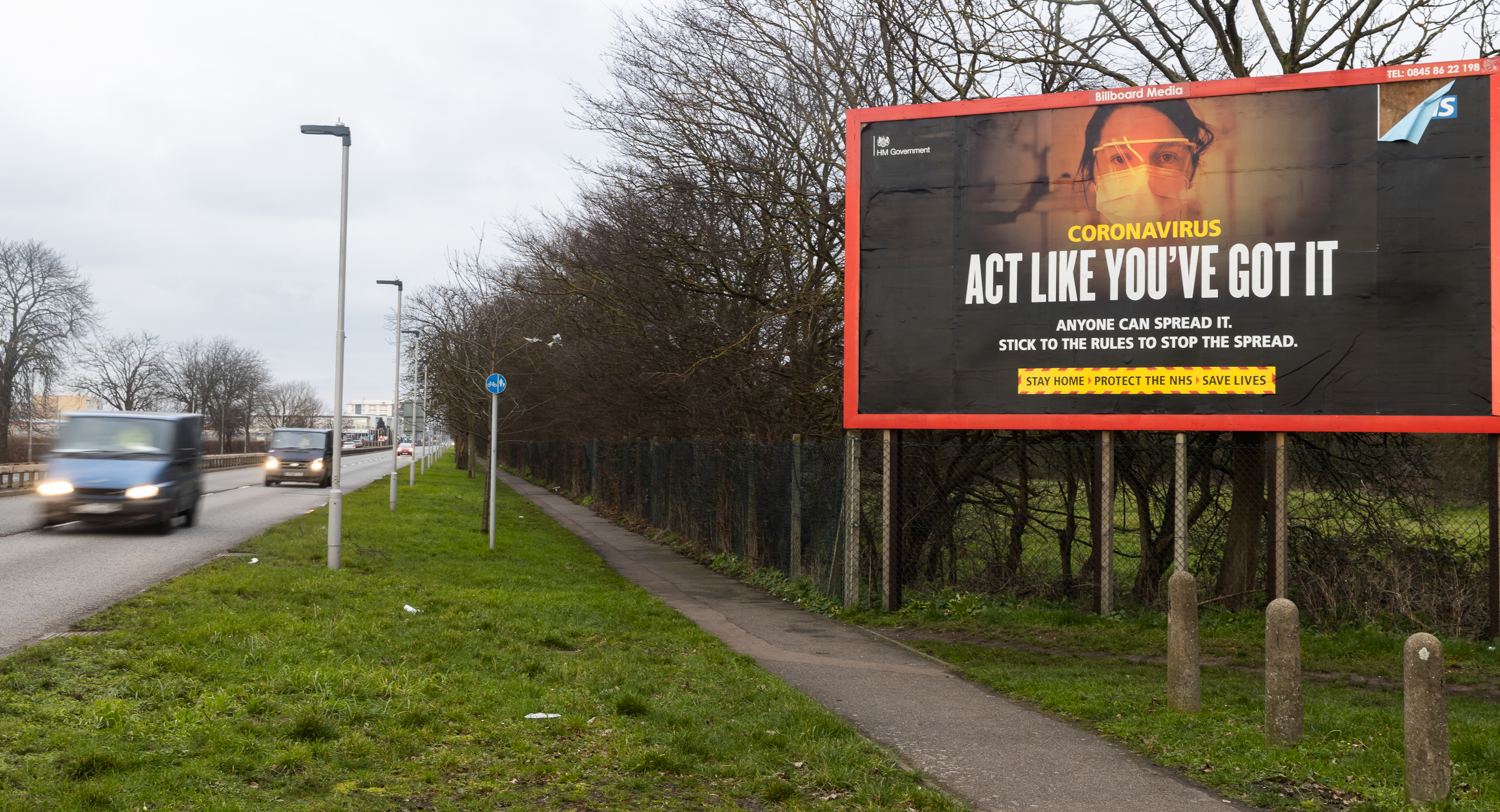 Last week Doncaster's health chief warned locals that "we are not out of the woods yet".

Dr Rupert Suckling, the Director of Public Health urged people to be vigilant and to not "slacken off" from the virus.

Eastleigh in Southampton has also seen a rise in cases in the last seven days,from 218.6 to 219.3.

North Tyneside also witnessed an increase in infection rates, climbing from 211.1 to 213.1.

The director of public health in the area warned residents that the South African variant had likely already reached Torbay.

Dr Caroline Dimond said the virus is still spreading in the area despite cases "generally falling" across the South West.

Other areas that have seen an increase in cases include East Lindsey in Lincolnshire which has gone from 103.7 to 148.2.

While cases have risen in the 15 areas above, some of the most infected parts of the country have seen a dip in their infection rates.

Despite a drop in infection rates in some areas, Prime Minister Boris Johnson has been warned to not lift lockdown restrictions.

The head of NHS Providers Chris Hopson warned the PM not to risk a major coronavirus setback by racing to unlock before systems are in place to prevent another massive surge in deaths.

He urged Boris to ensure the NHS' Test and Trace app was able to detect different strains of the virus within two or three days before easing lockdown rules in order to prevent a vaccine-resistant outbreak.

As things stand test and trace is only able to show whether somebody has covid or not, not whether they have the original strain that most vulnerable people will be vaccinated against within a few months, or a mutant strain such as the South Africa variant which vaccines may work less well against.

Celebrities
Prince William has made a donation in honor of six park rangers who tragically lost their lives earlier this year....
Lifestyle
Health-focused mum divides opinion after turning her Big Mac into a SALAD while her family eats the burgers - and...
TV & Movies
Ever since breaking into mainstream Hollywood with his incendiary capture of legendary baseball player Jackie Robinson in 2013's 42, acting...
World News
Playground that's fit for a duchess: Kate Middleton's Chelsea Flower Show garden inspires new Sandringham adventure wonderland Adventure playground was...
Beauty
5 New Beauty Rituals to Get Behind in 2021 After being surrounded by so much sameness, switching things up can...
Fashion
24 Ridiculously Cute New Items Zara Released For March I'm a shopping editor, and one of my personal favorite brands...
Recent Posts