Germany is Europe’s economic powerhouse but it’s running low on steam as one of its biggest export markets – China – slows down. Now, another event closer to its shores could add to those headwinds: the UK’s possible exit from the European Union without a trade deal.

The UK is already bearing the cost of Brexit uncertainty as companies delay, divert or halt investment ahead of its scheduled European Union divorce date of March 29. But if Britain crashes out of the bloc without a deal, a so-called “hard Brexit”, the resulting trade barriers could also spell trouble for Germany’s export-driven economy.

The German Economic Institute (IW), a liberal think-tank, estimates that Germany’s exporters would face extra tariffs of nearly $3.8bn if the UK left the EU without a trade deal.

“In the worst case this could reduce German-UK exports by over 50 percent,” IW Director Michael Huther told Al Jazeera. “As these exports are 2.6 percent of German GDP, the impact on the German economy could be severe.”

German companies, large and small, worry about the possibility of disruptions to supply chains, the movements of raw materials and parts involved in the manufacture of complex products.

Many companies send components back and forth across the UK’s borders several times before they are assembled into their final products. 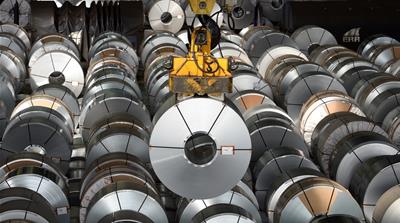 Currently, this not a problem because there are no tariffs imposed on goods moving between EU countries. But if the UK leaves without a trade deal, cross-border tariffs may have to be levied, requiring customs inspections at borders, slowing manufacturing down and increasing the costs of production.

“Even in the case of a relatively smooth withdrawal from the European Union, we still expect to face permanently higher costs,” Nicholas Peter, chief financial officer of German auto giant BMW, said in a statement last month.

The possibility of a hard Brexit is happening at an especially dicey moment for the German economy, which shrank by 0.2 percent in the third quarter last year; the first contraction since 2015.

The outlook for the fourth quarter and beyond also appears weak. 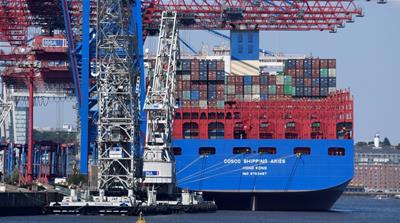 How much pain a hard Brexit could throw into the mix for German exporters varies widely depending on a firm’s geography and size.

The country’s hugely important small- and medium-sized industries, the so-called “Mittelstand”, could be particularly vulnerable.

Mittelstand make up more than 99 percent of German companies, employ over 61 percent of the country’s workforce and account for nearly 34 percent of the total turnover of German enterprises, according to the latest available official data.

“Large companies have their worst-case Brexit plans already in place and started relocating when a hard Brexit became possible,” said IW’s Huther. “In contrast, smaller Mittelstand companies are aware of the risks, but lack the manpower to address all scenarios. These companies will suffer the worst.”

Another concern is the potential knock-on effect a sharp slowdown in Germany could have on the rest of the EU.

“The German economy is really a lot larger than Germany,” said Erik Jones, director of European and Eurasian studies at the Johns Hopkins School of Advanced International Studies in Bologna, Italy.

Some believe the German economy is sufficiently resilient to withstand a hard Brexit even if manufacturing supply chains are disrupted.

“For those companies that are affected, this is a disaster,” said Stefan Kooths, head of the Forecasting Center at the Kiel Institute for the World Economy. “But not all companies are exposed to these risks,” he told Al Jazeera.

Brexit could even prove a boon for some sectors of the German economy. Case in point – the country’s financial services industry.

That’s because a hard Brexit could result in financial institutions such as banks and insurance companies losing their rights to sell services across the region, a system known as “passporting”. Relocating to another financial centre within the EU would ensure they can continue to do business across national borders smoothly.

Celebrities
Nicole Kidman, Cynthia Erivo, Alison Brie and Merritt Weaver are about to be castmates. The four stars will appear in...
Lifestyle
A New Jersey mother of three is dead of COVID-19 after an undergoing an emergency delivery. Joanna Jimenez had an...
TV & Movies
Becky Blasband, Andre Comeau, Heather B. Gardner, Julie Gentry, Norman Korpi, Eric Nies and Kevin Powell were picked to "live...
World News
£410m lifeline for arts venues: Museums, theatres and concert halls will be given budget bailout to help them stay afloat...
Beauty
In the world of shopping, there's always a worthwhile deal happening somewhere. And let's be real, there's never a better...
Fashion
Sheer shirts will inevitably make spring outfits cooler – this is where to find the best ones. Hey, spring, we...
Recent Posts