Washington: The United States Senate and House of Representatives have been evacuated after furious supporters of President Donald Trump stormed the Capitol Building to halt the certification of President-elect Joe Biden's victory.

The US capital descended into chaos after a massive security breach allowed a mob of rioters to enter the supposedly fortified complex, smashing through windows and making it as far as the Senate floor. 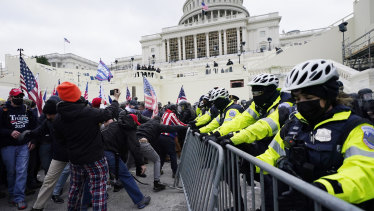 Trump supporters try to break through a police barrier outside the US Capitol in Washington DC.Credit:AP

Kevin McCarthy, the most senior Republican in the House of Representatives, said that shots had been fired inside the building. One woman was reportedly in critical condition after being shot.

"I could not be sadder and more disappointed by the way our country looks at this very moment," McCarthy said.

Dozens of Trump supporters were seen fighting with officers both inside the building and outside, with one making it as far of the dias of the chamber, where he shouted "Trump won this election".

As police battled with protesters, the Department of Homeland Security said they were sending additional federal agents to the Capitol to help quell the violence while Virginia Governor Ralph Northam announced that his state's National Guard and 200 State Troopers were being sent to respond to the situation.

One Republican called the invasion of the building a coup attempt while other members of the party pleaded with President Donald Trump to accept the election result and finally end his baseless claims of widespread fraud.

Vice-President Mike Pence, who was presiding over the Senate, was taken to a secure location alongside other senior politicians.

The riot effectively stopped the process whereby President-Elect Joe Biden would be certified as the next President of the United States, and it is not known when the session will resume.

Tens of thousands of protesters had gathered near the White House to hear Trump speak at a "Save America Rally" before making their way towards the Capitol Building, where Congress was meeting to certify the election results.

At the rally, Trump repeated his unfounded claims of election fraud, telling the crowd: "We will never give up, we will never concede.

Only minutes before protesters entered the Capitol, Trump lambasted Pence on Twitter for failing to reject the Electoral College votes from several key states.

"Mike Pence didn’t have the courage to do what should have been done to protect our Country and our Constitution, giving States a chance to certify a corrected set of facts, not the fraudulent or inaccurate ones which they were asked to previously certify," he said.

After protesters stormed the Capitol, Trump tweeted: "I am asking for everyone at the U.S. Capitol to remain peaceful. No violence! Remember, WE are the Party of Law & Order – respect the Law and our great men and women in Blue."

Republican congressman Michael Waltz told Fox News: "This is despicable. This is not who we are as a country."

Republican congressman Mike Gallagher, a military veteran, said he had not seen anything like it since he was deployed to Iraq.

"The president needs to call it off," he said. "Call it off, Mr President.

Washington DC Mayor Muriel Bowser has announced a curfew starting at 6pm local time and lasting until 6am the following day.

Democratic congressman Dan Kildee said on Twitter that the congress-members were instructed to lie on the floor and put on gas masks.

"This is not a protest," he said. "This is an attack on America."