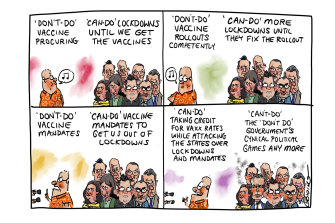 To submit a letter to The Age, email [email protected] Please include your home address and telephone number.

This will affect all of us

It is no surprise to read that the only humans sufficiently touched by the plight of the residents at St Basil’s to try their best to do something to make a positive difference, were the aged care workers (“Carers stand out in horror at St Basil’s”, The Age, 20/11).

It is also no surprise to read that the providers, businesses and government representatives connected with the facility were of no help and even made some aspects of the situation worse.

The aged care royal commission’s interim and final reports set out in detail the multitude of reasons why Australian aged care has been and remains vulnerable to such disasters. The reports plead the cause of both aged care workers and aged care users.

After climate change, aged care reform is high on the list of issues that will sooner or later adversely affect every Australian if the next federal government does not give those matters enough attention.
Ruth Farr, Blackburn South

An odd choice of words
Strange that Cricket Australia should assert that it “does not condone this type of language or behaviour”, after having determined that said language and behaviour did not breach its code of conduct. What else does “condone” mean?
Ben Redwood, South Yarra

Laws don’t stop crime
Your editorial (“Too many police spoil the solution”, The Sunday Age, 14/11) will hopefully prompt the needed change in the direction of decreasing crime.

As a justice of the peace for more than 30 years, I am astonished that you and so many people do not understand why crime rises with more “law and order” responses by government.

The criminal justice system is a growth industry. By arresting naughty children and criminalising them through incarceration and harsh treatment, we ensure a steady supply of criminals to feed the courts and jails. Laws create crimes, they do not prevent them.
Norm Pollack, Armadale

Bouquets to Medicare
Given the opportunity, there are many government and call-centre staff waiting to help us as we manage the digital age. Sadly, their work often goes unrecognised.

My 91-year-old mother-in-law was delighted to crack the conundrum of obtaining a digital vaccination certificate, a task which was beyond her on her own.

The personable Medicare staffer was kind, knowledgeable, patient and cracked a joke or two. We could not recommend her highly enough. Now, my mother-in-law can look forward to a trip to the theatre or even the pub. Bouquets to Medicare.
Ian Dallas, Hepburn Spring

Trouble in the wind
How on earth will non-essential retail businesses block the unvaccinated entering their store. I fear there will be some difficult situations and unpleasant verbal confrontations retail staff will encounter. Will retail businesses find themselves having to employ security staff?
Nigel Beresford, Drouin

Where does this end?
For many people, religion helps them be their best selves; for others, it is a justification for exclusion, or even worse treatment, of their fellow humans. Both outcomes can stem from “faith”, a belief held in the absence of objective evidence.

While, obviously, people should not be persecuted for practising a faith peacefully, religion should not hide behind its special status as an excuse for actions that exclude or harm others.

How does unsubstantiated religious “belief”, when damaging, differ from other damaging unsubstantiated “beliefs” on a spectrum of severity – such as conspiracy theories, racism, sexism, climate change denial, pandemic and vaccine misinformation and false claims of stolen elections – with the resultant chaos we are observing?

Should courts regard the unsupported “belief” of a witness as equally valid as irrefutable evidence in reaching a verdict?
Joe Di Stefano, Geelong

It’s back to front
The argy-bargy in the Victorian Parliament over the future pandemic rules exposes the glaring fault in our adversarial system of law formulation.

Instead of the party that just happens to be in government presenting the draft of a bill and then fiercely defending it with bluster, blind party solidarity, cajoling and deal-making, we should have a system whereby a need is brought forward – say, how could we best deal with a pandemic outbreak in the future – followed by the presentation of all the best ideas, irrespective of who is voicing them, and finally arriving at what emerges as the wisest decision. Then draft a law accordingly.

The present system, sadly, is back to front.
Barry Lamb, Heidelberg West

The horse has bolted
Your correspondent is right to worry about abuse of powers by governments (“Consult Amnesty about ‘arbitrary conduct’”, Letters, 19/11).

Asylum seekers have been detained indefinitely without appeal and federal anti-terrorism laws allow you to be picked up in secret and detained without the right to inform anyone of what is happening to you. The horse has bolted.
Graeme Finn, Summer Hill, NSW

Frustrations galore
I’m so happy the Prime Minister now understands the frustrations of Victorians. It’s incredibly comforting to finally have his support.

We’ve been so frustrated by the failure of the federal government in many areas – aged care, fit-for-purpose quarantine facilities and the really frustrating failure to get us vaccinated in a timely manner.
Belinda Burke, Hawthorn

The Age’s editor, Gay Alcorn, writes an exclusive newsletter for subscribers on the week’s most important stories and issues. Sign up here to receive it every Friday.