Fatalities from the Tongan volcano explosion and resulting tsunami has risen to four as the government reports extensive damage to housing on islands in the archipelago.

The Tongan government released its first statement on Tuesday night following the blast, outlining initial recovery efforts including a response team from the main island of Tongatapu reaching smaller islands, where evacuations are taking place. 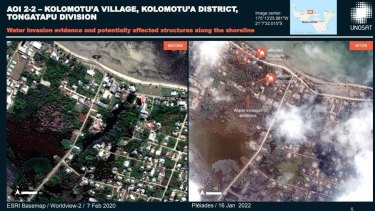 A tsunami warning had been cancelled and activity at the Hunga Tonga-Hunga Ha’apai volcano had “significantly decreased”, the Tongan government said in its statement. But monitoring was ongoing, with the volcano just 65 kilometres from the capital Nuku’alofa.

United Nations representative for Pacific Island countries Jonathon Veitch said four deaths had been reported. Three Tongan nationals and a British woman lost their lives when the tsunami swept across the island chain.

All the houses on the outlying Mango Island were destroyed by the tsunami that rolled across the ocean after the volcano erupted and work to quantify the damage was ongoing, Mr Veitch said.

Other smaller islands sustained “massive damages”, he said, including Fonoifua and Nomuka.

Mr Veitch said there were reports of 100 houses damaged on the main island, and 50 destroyed.

Communications remain a focus of recovery efforts, with the undersea cable linking Tonga to the internet expected to take weeks to repair. Telstra and the Australian government are working to establish satellite links.

Prime Minister Scott Morrison said on Wednesday the Tongan expatriate community expect Australia to do “everything we can to stand with our Pacific family”.

Tongans around the world are anxiously waiting to hear from family and friends, with many in Australia still attempting to make first contact since the eruption.

Mr Morrison said he hoped to speak with the Tongan Prime Minister today.

“Any time a Pacific nation has called on us for support, we have always said yes,” he said.

Australia has committed an initial $1 million in funding for Tonga, with more available as the disaster response progresses.

“They not only have lots of supplies,” he said. “They have the ability to provide clean water with desalination plants on the ships and they carry potable water as well.”

The airport runway is still unusable due to a thick layer of ash, which is taking days to clear and more keeps falling from the thick cloud emitted from the volcano.

Water supply is also a pressing issue, with the ash contaminating water stores and rainfall.

A C130 Hercules aircraft is ready to leave the Amberley air base south of Brisbane, as soon as the runway in Tonga is cleared. Australia’s HMAS Adelaide was on Wednesday being loaded in Brisbane with medical and engineering equipment, as well as personnel. It will take about five days to travel to Tonga.

The explosion was an “unprecedented disaster” for Tonga, the government said.

“As a result of the eruption, a volcanic mushroom plume was released reaching the stratosphere and extending radially covering all Tonga islands, generating tsunami waves rising up to 15 metres,” the statement said.