‘We’ll rebuild it fast’: Donald Trump surveys Hurricane Laura’s damage and vows that hard-hit areas will be back on their feet soon after storm killed at least 15 and left more than 750,000 without water or power

President Donald Trump got a firsthand look Saturday at the damage from Hurricane Laura as he traveled to Louisiana and then Texas to inspect the cleanup response.

The president had words of encouragement for Louisiana as he said he knew the state would ‘rebuild it fast’ and praised the work of first responders and law enforcement.

His visit came two days after the Category 4 storm slammed the Gulf Coast, leaving at least 16 dead and wreaking havoc with severe winds and flooding.

While the storm surge has receded and the cleanup effort has begun, hundreds of thousands remain without power or water, and they could for weeks or months as the hot summer stretches on. 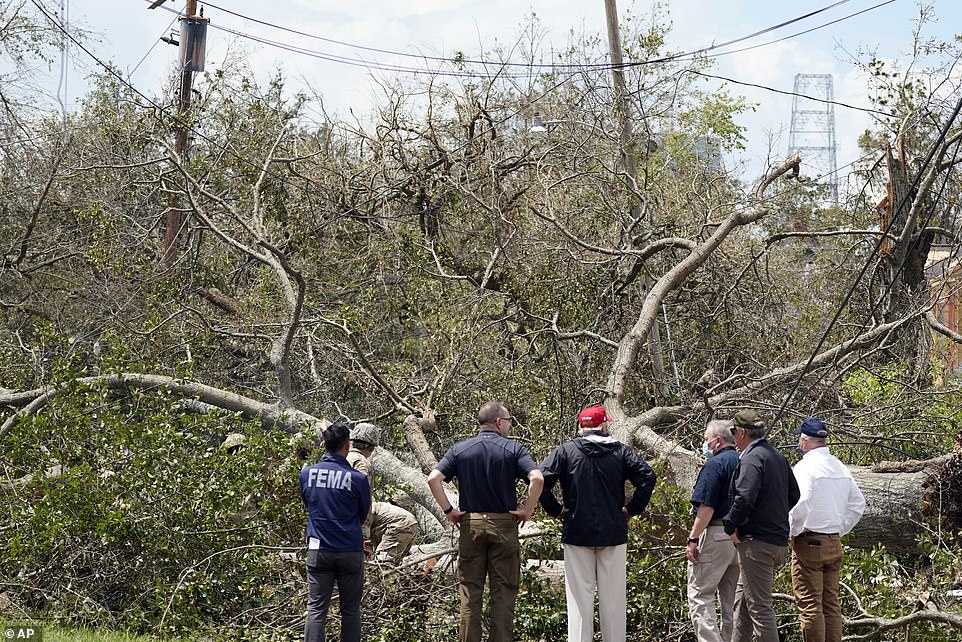 President Donald Trump looks at damage caused by Hurricane Laura as he tours Lake Charles in Louisiana on Saturday afternoon. He is traveling to Orange, Texas, later in the day 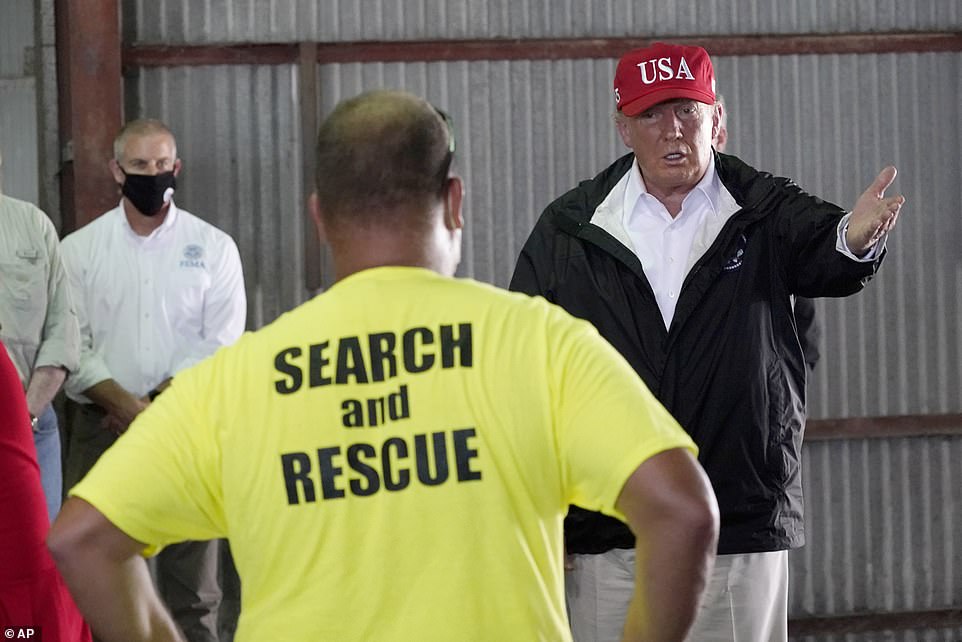 President Donald Trump speaks with first responders as he tours a warehouse in Lake Charles, Louisiana, being used as a distribution point for relief aid after Hurricane Laura

‘I’m here to support the great people of Louisiana,’ he said in Lake Charles, where he arrived around 1pm in the afternoon wearing a bright red hat with ‘USA’ on the front and ‘Trump’ on the back.

‘One thing I know about this state, they rebuild it fast,’ he added.

As Air Force One came in for its landing, Trump got a bird’s eye view of the extensive damage, the smashed houses, downed power lines and trees, and debris strewn across the city of 80,000 people.

His first stop was a warehouse being used as a staging area for the Cajun Navy, a group of Louisiana volunteers who help with search and rescue after hurricanes and floods.

‘Good job,’ Trump told them, as he took a minute to pray with them.

Trump then toured a neighborhood with Gov. John Bel Edwards and acting Homeland Security Secretary Chad Wolf, making his way down a street blocked by felled trees and where houses were battered by the storm, one with its entire roof torn off.

During a visit to the headquarters of the Federal Emergency Management Agency, the president was told of the problems in returning power and water as residents battled to cope with the heat.

According to USA Today, more than 220,000 people are without water and the restoration could take weeks or even months.

He later planned to visit Orange, Texas, which was the worst-hit area in the state. 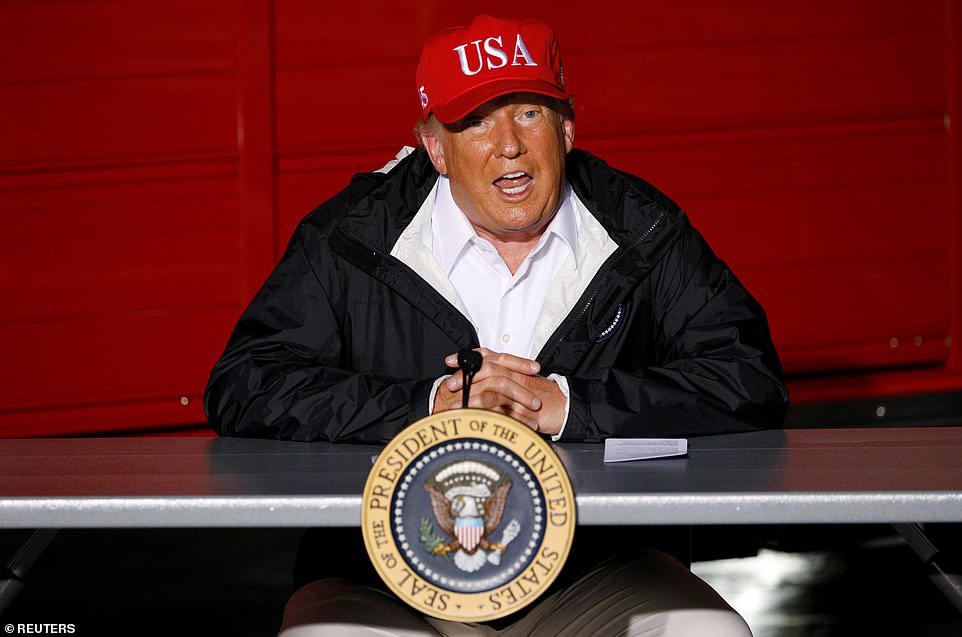 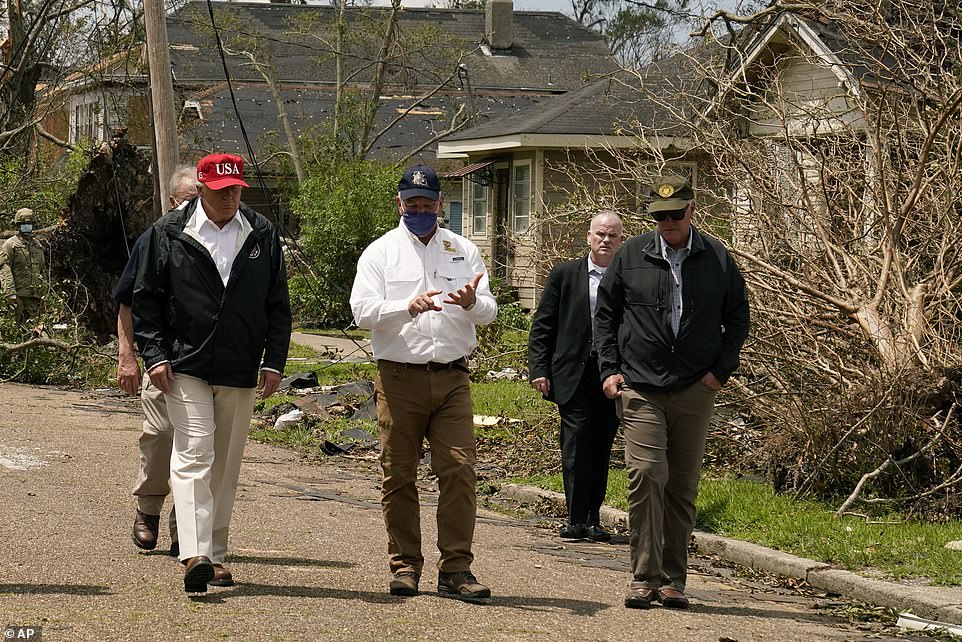 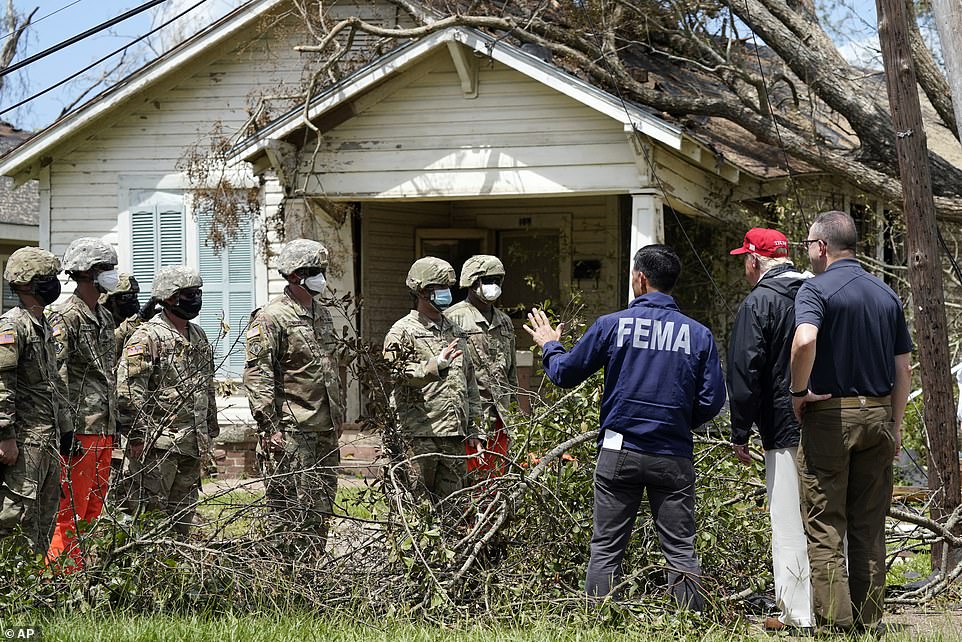 Trump has sometimes struggled with his role as consoler in chief, failing to project empathy when visiting places hard hit by tragedy and disaster. That includes in Puerto Rico, where Trump was photographed tossing rolls of paper towel into the crowd, which some saw as inappropriately playful, given the circumstances.

During a trip to the Carolinas in 2018, Trump marveled at a yacht floodwaters had washed onto a family´s property, telling them, ‘At least you got a nice boat out of the deal.’

Other times, Trump has been a source of comfort. After a tornado ripped through Alabama last year, killing nearly two dozen people, Trump spent time with families who’d lost loved ones, listening to their stories and hugging them.

Showing empathy has come more naturally for his Democratic rival, Joe Biden, who issued a statement Saturday saying he and his wife were praying for those hurt by the storm and promising that ‘we will be there to help you build back better.’

In a possible subtle dig at the incumbent, Biden praised the response of families in the hurricane-hit states and thanked them for ‘reminding Americans that no disaster, no single person, no injustice can match the humble, personal, courageous ways that Americans choose decency every single day.’ 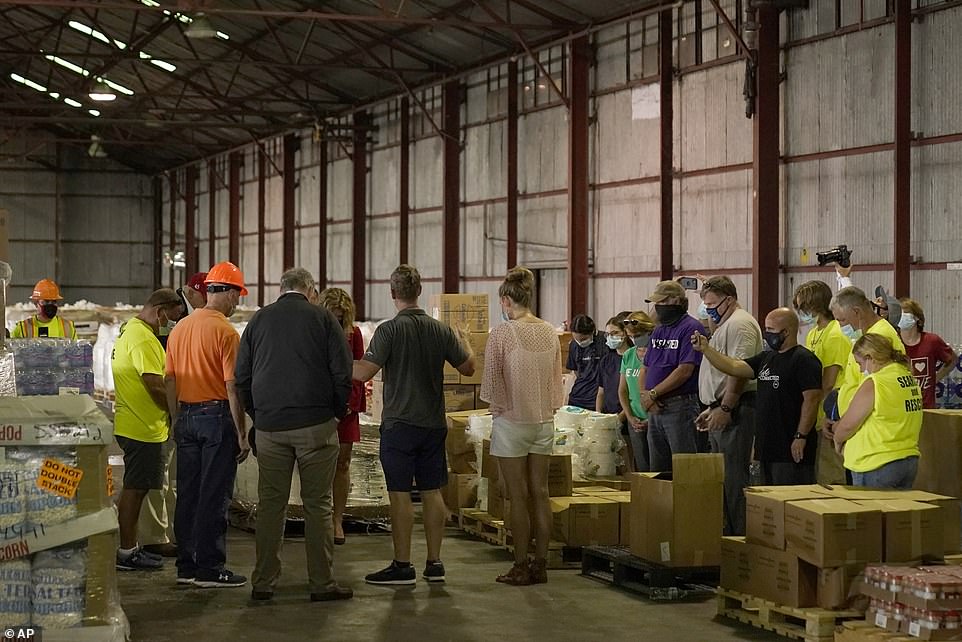 President Donald Trump prays with a group of first responders before he tours damage from Hurricane Laura in Louisiana. At least 14 people were killed by the devastating storm 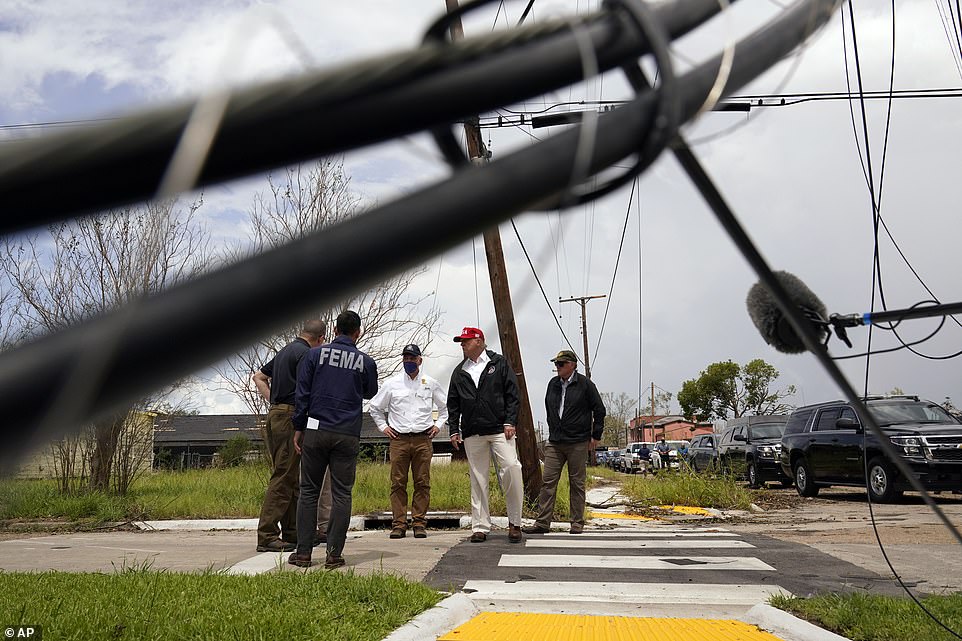 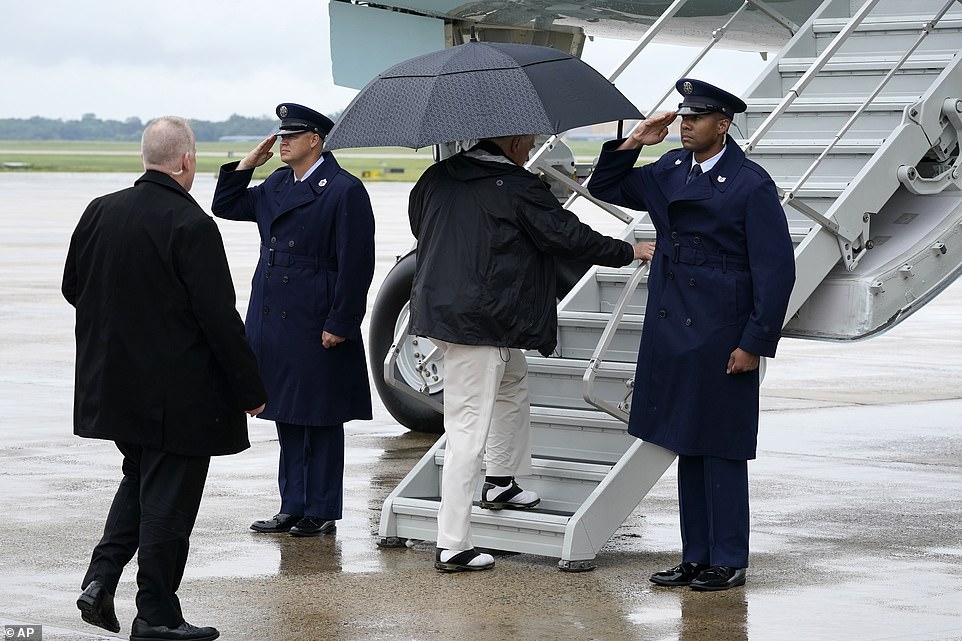 Edwards has said Laura was the most powerful hurricane ever to strike his state, surpassing even Hurricane Katrina, which was a Category 3 when it hit in 2005. The storm toppled trees and damaged buildings as far north as central Arkansas, and more than 580,000 coastal residents evacuated in the midst of the coronavirus pandemic.

The U.S. toll from the storm, which packed 150-mph winds and a storm surge as high as 15 feet, currently stands at 14 deaths, with more than half of those killed by carbon monoxide poisoning from the unsafe operation of generators.

The hurricane also killed nearly two dozen people in Haiti and the Dominican Republic as it barreled toward the U.S.

Weaker remnants of the hurricane continued to move across the southern U.S., unleashing heavy rain and isolated tornadoes. North Carolina and Virginia could get the brunt of the storm on Saturday, according to forecasters.