Donald Trump convinced fans ‘there is no truth’ claims Comey

James Comey, former Director of the FBI, blamed Donald Trump for the recent disorder in the US. Speaking to BBC Radio 5 Live, Mr Comey said: “The American people elected a really bad person as President of the United States. And he was who he told us he was in a way, and so it’s not surprising that having spent four years egging on, encouraging, fomenting the racist radioactive stew that’s always laid in the basement of America. He’s coaxed it out into the daylight and we had an eruption, an almost Chernobyl-like radioactive spill of that hatred on our sacred ground of Capitol Hill.”

Discussing the impact President Trump had on truth and trust in the US, Mr Comey added: “Well, that’s one of the things Donald Trump did to our nation that is most dangerous and most in need of attention…that is convincing many, many people that there is no truth, that the truth can’t be found, that it’s too hard, that they shouldn’t bother – that’s just false.

“There are different kinds of truth.

“There is a truth that is my perspective, your perspective. My beliefs, your beliefs.

“But there’s a core of things that are falsifiable or verifiable. 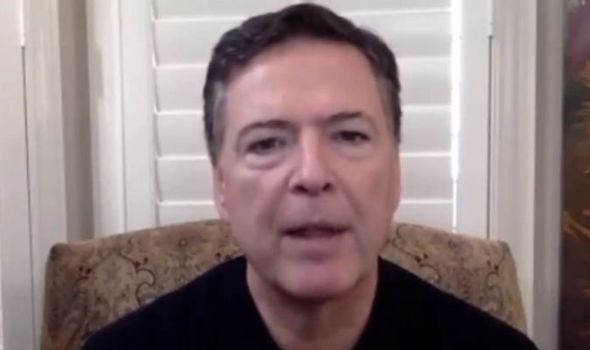 “It’s raining in the room in which I speak, now that’s false.

“If I say it’s raining in this room, that’s not my perspective, I’m just lying.”

“That’s not perspective, that’s a lie.”

His comments come as Mr Trump will not be visiting Scotland ahead of inauguration day, the PA news agency understands.

There had been speculation that the US president would visit his Turnberry golf resort in South Ayrshire ahead of Joe Biden taking office at the White House next Wednesday.

But PA now understands Mr Trump will not be in Scotland.

As part of the tradition, the outgoing president and president-elect usually travel together to the ceremony at the Capitol from the White House.

But Mr Trump, who was overwhelmingly defeated in November’s US election, has previously said he will not attend the January 20 ceremony for his successor.

The 74-year-old was reportedly considering travelling to Turnberry to avoid seeing Mr Biden being sworn into office.

Prestwick Airport was told to expect the arrival of a US military Boeing 757 aircraft previously used by Mr Trump on January 19, according to the Sunday Post.

But First Minister Nicola Sturgeon has in recent days stressed it is illegal to travel in or out of Scotland without a valid reason, adding: “Coming to play golf is not what I would consider to be an essential purpose.”