BELLINZONA, Switzerland (Reuters) – The United States is prepared to engage with Iran without pre-conditions about its nuclear program but needs to see the country behaving like “a normal nation”, U.S. Secretary of State Mike Pompeo said on Sunday. 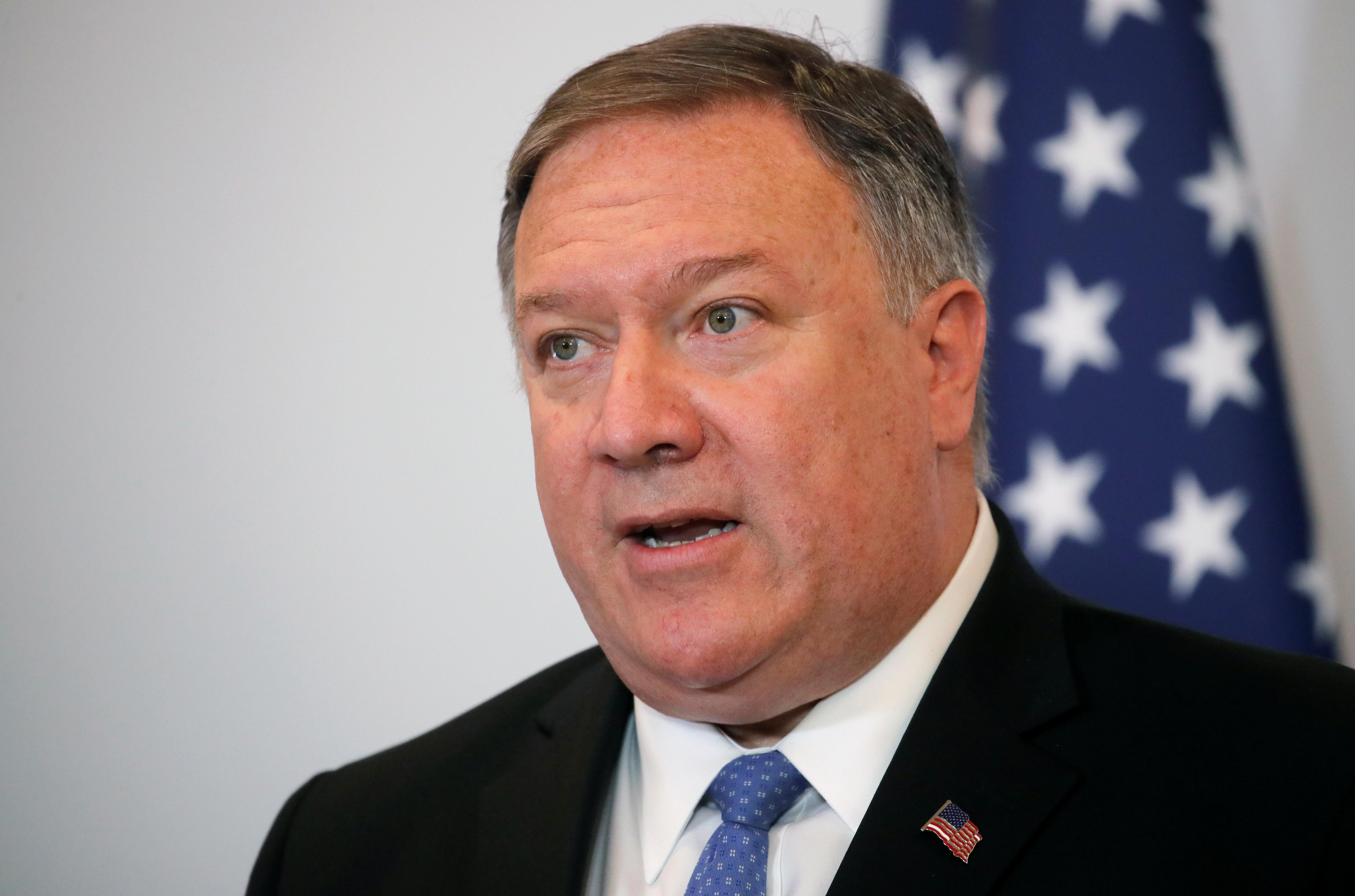 Iran responded by calling the offer “word-play”, and asked for action instead.

Iran’s President Hassan Rouhani suggested on Saturday that Iran may be willing to hold talks if Washington showed it respect, but said Tehran would not be pressured into talks.

Pompeo, in an apparent softening of his previous stance, said when asked about Rouhani’s remarks: “We are prepared to engage in a conversation with no pre-conditions, we are ready to sit down.”

However, he said Washington would continue to work to “reverse the malign activity” of Iran in the Middle East, citing Tehran’s support to Hezbollah and to the Syrian government.

Pompeo said U.S. President Donald Trump had been saying for a long time that he was willing to talk to Iran.

“We are certainly prepared to have that conversation when the Iranians can prove that they want to behave like a normal nation,” Pompeo told a joint news conference with his Swiss counterpart Ignazio Cassis in the southern Swiss city of Bellinzona.

Responding to the U.S. offer, Iran’s foreign ministry spokesman Abbas Mousavi said: “The Islamic Republic of Iran does not pay attention to word-play and expression of hidden agenda in new forms. What matters is the change of U.S. general approach and actual behavior toward the Iranian nation.”

Mousavi was quoted as saying by Mehr news agency “Pompeo’s emphasis on the continuation of maximum pressure on Iran is the same old wrong policy that needs reform.”

Trump said last Monday he was hopeful Iran would come to the negotiating table. But Supreme Leader Ayatollah Ali Khamenei said on Wednesday Tehran would not negotiate with Washington, even after Rouhani had previously signaled talks might be possible if sanctions were lifted.

He said Iran needed to make payments for this, and that was possible only if the United States allowed banks to transfer payments. Cassis said he was confident the United States would come up with the “best possible solution” to that problem in a short time.

Iran has stayed within the main restrictions of its 2015 nuclear deal, a quarterly report by the U.N. atomic watchdog indicated on Friday, at a time when Tehran is threatening to break the rules in future in response to new U.S. sanctions.

Pompeo declined on Sunday to comment on the latest report by the International Atomic Energy Agency (IAEA). He said Washington was tracking IAEA findings closely but added: “We also have our own independent understanding of what is taking place there.

“And the world should be mindful that we are watching closely how Iran is complying with the requirements that were set out in the JCPOA, not only the heavy water issue, but the amount of high-enriched uranium which they are accumulating,” he said, referring to the Joint Comprehensive Plan of Action which the Trump administration has quit.

Last year, Pompeo outlined 12 ways Iran must change — including stopping its support for proxy groups and halting its missile program — before the United States lifts sanctions.

He also called on Iran to stop uranium enrichment, never to pursue plutonium reprocessing and to close its heavy water reactor. He said it also had to declare all previous military dimensions of its nuclear program and to permanently and verifiably abandon such work.

Switzerland has served as an intermediary between Iran and the United States since shortly after the Islamic revolution in November 1979. Switzerland provides protective and consular services for some 100 U.S. citizens and 12,000 people with both U.S. and Iranian citizenship.

At least five American citizens, including four dual nationals of the United States and Iran, are detained in Iran as well as at least two permanent U.S. residents.

Another American, former FBI agent Robert Levinson, has been missing in Iran since 2007. Iranian officials have repeatedly denied knowledge of his disappearance or whereabouts. 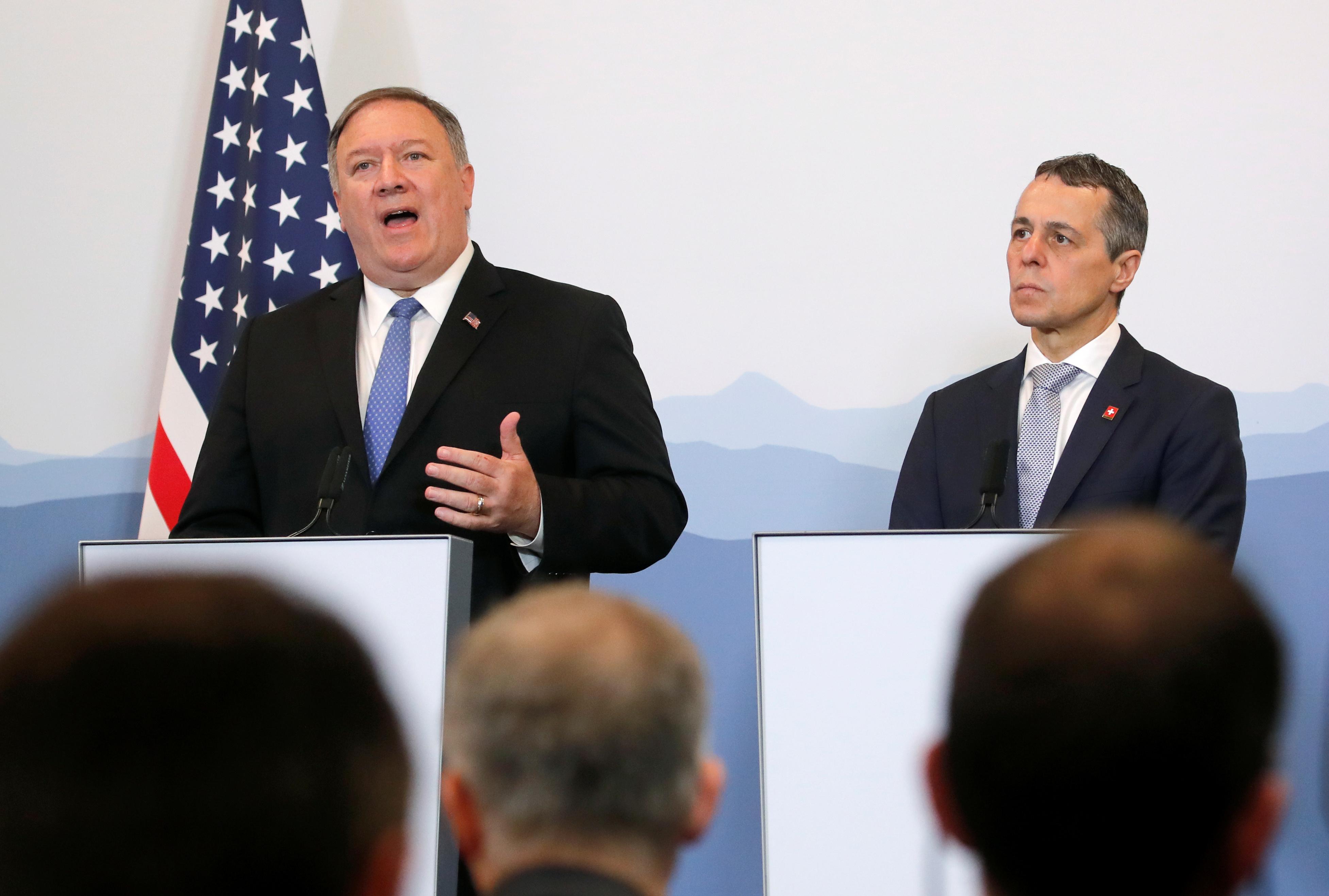 Pompeo declined to offer details about efforts to secure the release of the detainees and whether this would boost confidence with Tehran, but said their families should know it was an issue worked on “every single day”.

Iran and the United States have been drawn into starker confrontation in the past month, a year after Washington pulled out of a deal between Iran and global powers to curb Tehran’s nuclear program in return for lifting international sanctions.

Washington re-imposed sanctions last year and ratcheted them up in May, ordering all countries to halt imports of Iranian oil. In recent weeks it has also hinted at military confrontation, saying it was sending extra forces to the Middle East to respond to an Iranian threat.