The latest hot weather maps show temperatures reaching highs of 24C (75F) in southern regions, including London and Surrey. The highs will be pushed up from a plume coming from western parts of Europe, according to Netweather maps. Forecaster Nick Finnis said high pressure will send temperatures soaring to the 20s in the south.

He said: “Into the weekend, a noticeable easterly breeze strengthening across the south, as an area of low pressure pushes up over the Bay of Biscay and western France against high pressure in situ over Britain, causing isobars to tighten.

“The low over France could introduce a few showers across southern most counties of England, particularly later on Saturday and overnight into Sunday morning.

“The far north of Scotland will be often cloudy, with a chance of a few showers here too.

“But for the rest of the UK, high pressure will be firmly in control bringing dry and fine weather with plenty of sunshine.

“Temperatures reaching the mid to high teens in the north, high teens to low twenties on the south.” 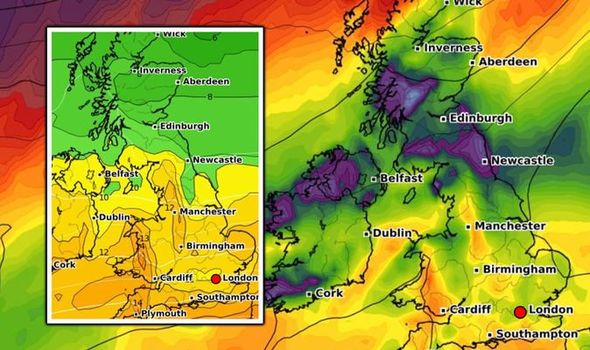 It said: “Tomorrow there is a risk of rain in the far north. Other areas have a fine day.

“In southern and central regions it will be warm with temperatures peaking at close to 24C (75F).

“Saturday will be dry with be mainly dry with sunny periods.

“There is a risk of showery rain pushing into areas to the south of London in the afternoon. Warm in the south.

“Little changes on Sunday. In the south showers are possible and in the far north thicker cloud could bring some light rain. 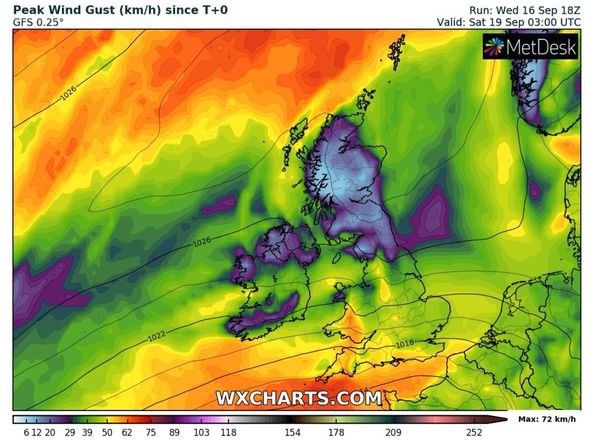 The Met Office warned there may be spells of rain this weekend in northern areas.

But this will clear to make way for more sunshine on Monday.

It said: “A little rain in the far north and northwest.

“Elsewhere dry with plenty of sunshine for many. Fairly warm but distinctly breezy in the south, gusty winds for some.

“On Monday, drizzle in north easing, then many partssunny on Saturday, showers later in south. Some heavy showers in south Sunday, but sunshine for many. 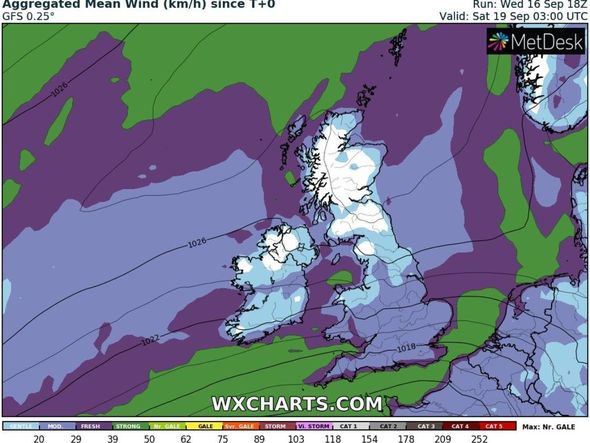 He said: “The jet stream will remain to the north of the UK for the next 5 days or so, with an area of high pressure in control, generally centred over northern Britain, bringing generally fine and settled conditions for the rest of the week and through the weekend.

“Then as we move into next week it looks increasingly likely that there will be a more widespread transition to unsettled conditions, with windier conditions along with spells of rain or showers, as the jet stream moves south across the UK.”

He added next week will start sunny but will become more unsettled as the week progresses. 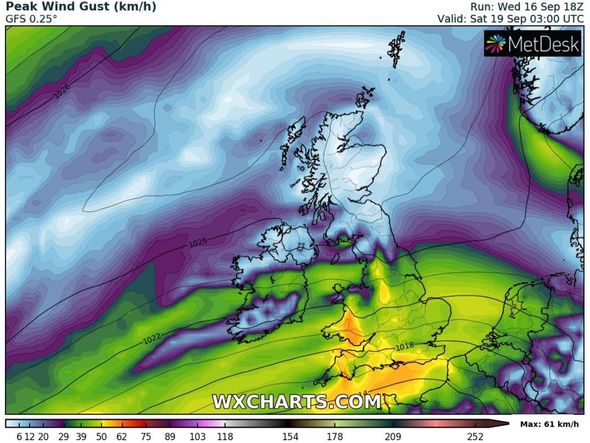 He said: “Dry and sunny for much of England and Wales on Monday, with a ridge of high pressure keeping things settled.

“A cold front will introduce cloudier skies to Scotland and Northern Ireland, with rain arriving in the northwest by evening.

“This front continuing southeast on Tuesday, bringing a cloudier day to England and Wales, with showery bits of rain, brighter conditions but with showers in the west following across Scotland.

“Turning increasingly unsettled through the rest of the week, as the jet stream moves south and low pressure moves in off the Atlantic, bringing windier conditions, spells of rain or showers.”