The Met Desk weather map shows snowfall of up to 15 centimetres to batter the north of the country from January 13. The severely cold weather is expected to last for the rest of the month and into February. These cold snaps, dubbed polar vortex outbreaks, drive intense bouts of snowy weather sometimes called snowmageddons. Met Office forecaster Greg Dewhurst said: “It will be a wet and windy day across the west of the UK and cloudy elsewhere.

“Through the day we will see rain and strong winds pushing south-eastwards.

“Four to five centimetres of snow is possible over the tops of mountains through the weekend.”

The Environment Agency has issued 21 flood warnings and 36 flood alerts as up to 1.57 inches of rain could fall in some areas.

The Environment Agency’s flooding forecast states: “Local groundwater flooding is expected in parts of Dorset, Wiltshire, Hampshire, West Sussex and Brighton and Hove for at least the next five days. 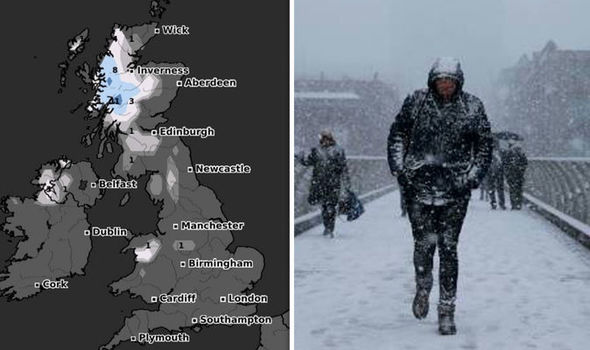 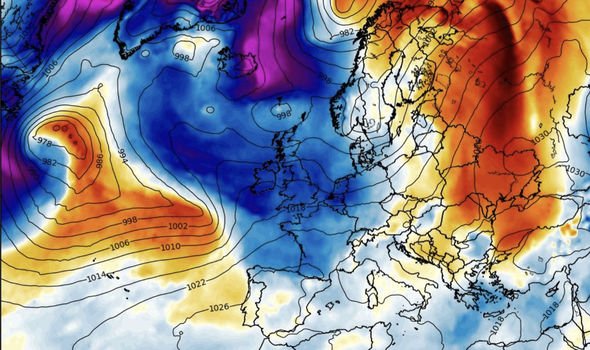 “Land, roads and some properties will flood and there will be travel disruption.”

The polar vortex is an area of low-lying pressure over the Arctic, where chilling winds between six and 31 miles (10 to 50km) up affect weather on the surface.

And though the polar vortex is considered the culprit behind snowstorms in Europe and parts of Asia, researchers in the UK are looking to the tropics to explain freezing weather in the US and Canada.

When a snowmageddon struck the US in February 2010, the blizzard paralysed the country all the way from the southeast through Mexico and up towards California.

Snowfall in some parts of the country reached dire heights between 20 and 30 inches (50cm to 90cm) and claimed many lives.

In Indiana, two men were killed in the blizzard when driving through heavy snow and colliding with an oncoming truck.

In Maryland, two men died of carbon monoxide poisoning after their car’s tailpipe was blocked by snow. 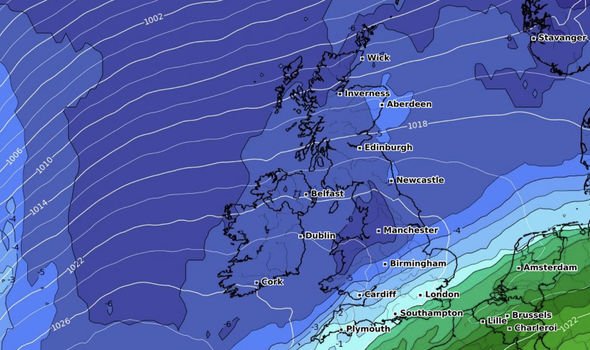 Forecasting the period of January 15-29, the Met Office said: “Spells of heavy rain and strong winds look most likely across northern and western parts.

“These could be interspersed by more showery interludes where some snow could fall over higher ground.”

Netweather has also stated the possibility of snow showers to hit the UK.

They added within a similar timeframe that “some colder north-westerly incursions potentially bringing sleet and snow to low levels, particularly in the north and in Northern Ireland”.