London: The first phase of an "unprecedented" mass vaccination program in Britain will target nine groups of vulnerable people who represent up to 99 per cent of preventable deaths from COVID-19, with the first jab to be delivered early next week.

Prime Minister Boris Johnson hailed the emergency approval of the Pfizer-BioNTech shot as a win for science and the beginning of the end of the pandemic. 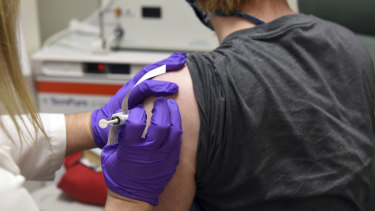 Britain will start using the Pfizer BioNTech vaccine from next week.Credit:AP

Health Secretary Matt Hancock said December 2 would go down as a "day to remember in a year to forget".

Johnson's press secretary Allegra Stratton told reporters in Downing Street on Wednesday that the Prime Minister would consider being vaccinated live on TV to help boost community support for the jab, provided it did not prevent someone in more clinical need from getting one.

Professor Munir Pirmohamed, the chair of the government's expert working group, said the vaccine would be administered in two doses delivered 21 days apart.

"From the data presented to us people will be immune seven days after the second dose," Sir Pirmohamed said.

Studies have shown the jab has an efficacy of up to 95 per cent and works in preventing disease in all age groups.

Asked about potential side-effects, Sir Pirmohamed said: "From the data that's been provided, most of the adverse effects were mild and short-lasting – usually lasting a day or two – similar to the sort of effects you get after any other vaccine."

The UK has ordered 40 million doses – enough to vaccinate 20 million people. It has also secured access to half-a-dozen other vaccine candidates, including one being developed by Oxford University and pharmaceutical giant AstraZeneca.

The Morrison government has bought 10 million doses of the Pfizer vaccine for Australia but Canberra does not expect to secure regulatory approval until early next year.

Care home residents and their carers, everyone aged over 80, frontline health and social care workers and people aged over 70 make up the first four priority groups for vaccination in England, Wales, Scotland and Northern Ireland.

Those four groups will be followed by those aged 65 years and over, and everyone aged between 16 and 64 who have underlying health conditions which put them at higher risk of serious disease and mortality. This could potentially include the overweight given the strong link between COVID-19 and obesity.

The final three priority groups are those aged 60 and over, 55 and over and 50 and over.

"If we vaccinate everybody from the age of 50 and above that captures 90 to 99 per cent of preventable deaths," said Professor Wei Shen Lim, the chairman of the government's vaccine advisory committee.

Lim agreed the need to store the Pfizer vaccine at minus-70 degrees presented challenges but stressed the product is stable for a "short" period of time at 2 to 8 degrees, allowing it to be transported to most vaccination sites.

"Every vaccine that comes through will probably have its own characteristics in terms of storage, transport and deliverability," Lim said.

"The Pfizer vaccine in particular has a strong requirement for very cold storage and there are stability issues potentially that constrain how a vaccine can be supplied to different people.

"But let's not forget that a mass vaccination program, as will be conducted very soon, is an unprecedented thing. It will be the largest vaccination program in the UK for decades so there will be all manner of operational flexibilities required during the deployment."

The Pfizer vaccine is yet to be approved by regulators in America or the European Union.

The European Medicines Agency appeared to take a swipe at the UK's decision on Wednesday, saying the slower European approval process required more checks than the emergency procedure chosen by Britain.

Get our Coronavirus Update newsletter

Stay across the news you need to know related to the pandemic. Sent Monday and Thursday. Sign up here.