The upgraded warning, for between 2pm and 11pm today, has warned the thunderstorms could batter some parts of the UK with as much as 20mm of just an hour. Some areas could even receive as much as 30-40mm within a few hours. The Met Office warned the thundery showers that could cause severe travel disruption for millions of people.

Flooding of some homes and businesses is likely, leading to damage to buildings or structures.

Power lines could also be taken out due to the force of the storm, its journey times taking longer because of the spray and flooding on roads.

The Met Office’s upgraded warning stretches from Plymouth to as far away as London and Nottingham.

Met Office warns of severe Storm Miguel TODAY – which areas are under alert? 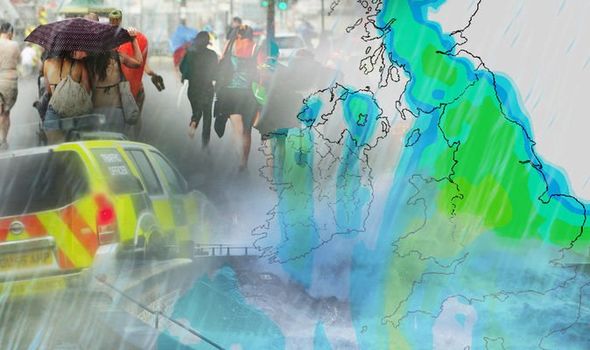 The Met Office issued its most recent weather forecast for the UK at 11am, with rain, often heavy at the times, hitting the south.

This will likely move northwards to reach Northern Ireland and Scotland later today, with heavy showers following and strong winds remaining in the south.

Met Office meteorologist Alex Deakin said: “Most of us will see some wet and windy weather over the next 48 hours but for many Friday morning promises some fine weather.

“For many Friday morning promises some fine weather yes a bit chilly across the north but there will be some sunshine around for the South.

“Outbreaks of rain trickle in a bit misty and murky to start the day across Shetland as well but elsewhere across Scotland much brighter starts.

“It is pretty cold out there first thing as it is for Northern Ireland northern England these are the temperatures in towns and cities and rural areas start the day well down into single figures.”

Heavy flooding is likely to cause havoc on major motorways during rush hour later today, including the M4 and M5.

Mr Deakin added: “Not quite as cold further south because here we’ve got the cloud and the outbreaks of rain.

“A band of rain will slowly track its way northwards as we go through the day.

“Eastern England starting the day dry and bright but the winds will be picking up coming in from our rather chilly North Sea.

“The rain may persist for much of the day across parts of West Wales and the far southwest of England.

“This zone just to the south where we’re a bit concerned about the downpours that are likely to break out through Friday afternoon and into the evening.”